The Democratic surrender on tax cuts

All signs point to no vote before the election. Republicans and the richest Americans win. Obama loses 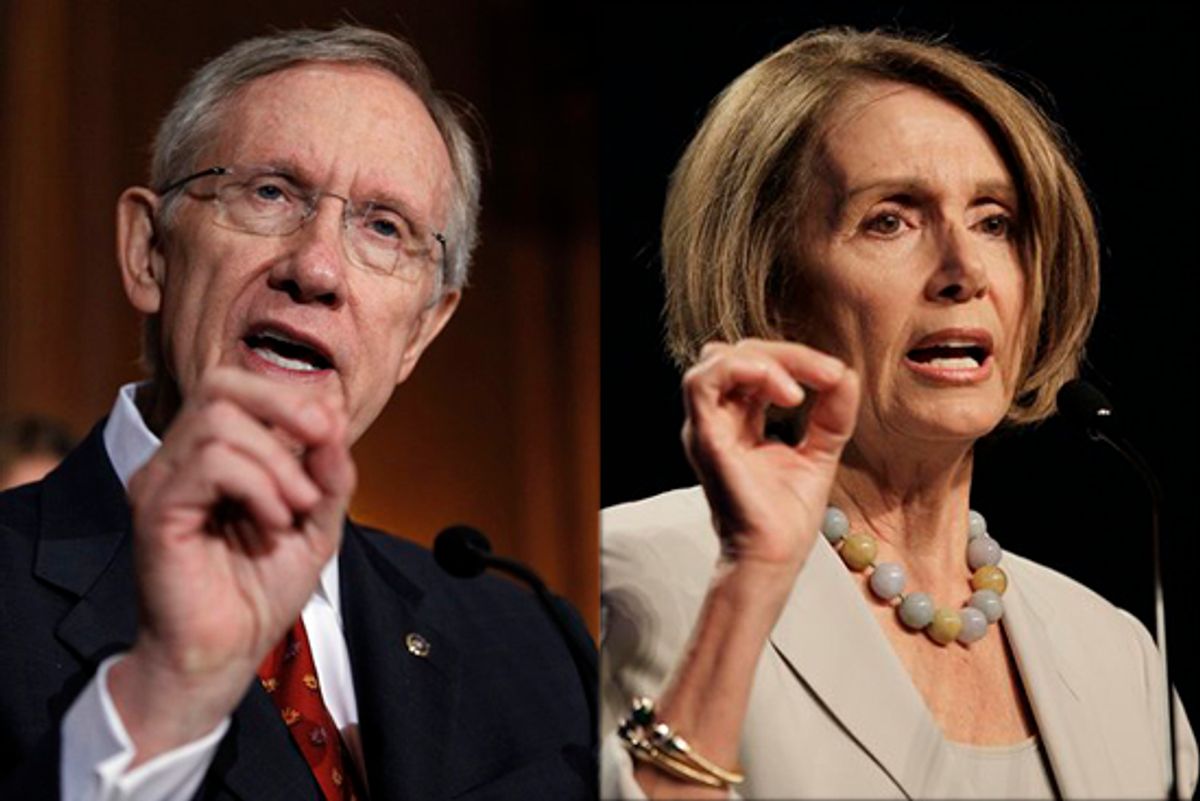 FILE - In this Aug. 5, 2010 file photo, Senate Majority Leader Harry Reid of Nev. gestures during a news conference on Capitol Hill in Washington. "It's still the economy, stupid." And there's virtually nothing Democrats can do to change that reality before Nov. 2. Time has all but run out for President Barack Obama and his party, which had hoped for a big economic turnaround by the homestretch of the midterm elections. (AP Photo/Alex Brandon, File) (Alex Brandon)
--

What is there left to say about the spinelessness of congressional Democrats? A consensus appears to be emerging from Washington that both the Senate and the House are bailing on their plans to hold a vote before the election that would force Republicans to put up or shut up on their pledge to keep tax cuts for the wealthy in place.

One Senate aide told TalkingPointsMemo that the decision to postpone dealing with the fact that all the Bush tax cuts will expire at the end of the year was no big deal -- it was a victory!

The aide said it's already a winning message without a vote since Obama and Democrats have framed the debate as the Republicans being for the rich and Democrats wanting to help the middle class. Others have made similar arguments, but several lawmakers have said they think a vote is the only way to score a political victory. The senior aide doesn't think so.

"We have a winning message now, why muddy it up with a failed vote, because, of course, Republicans are going to block everything," the aide said.

The aide is wrong. What the Democrats have succeeded in doing is proving that they don't have the courage of their convictions and that they can be pushed around by the minority party with ease. It would have been much better never to have even raised the possibility of holding a vote to extend just the middle-class tax cuts, than to promise to do so, and buckle after a few mean looks from Mitch McConnell and John Boehner. After the election, a Republican push to keep all the Bush tax cuts in place will be much harder to resist. It's a complete policy failure. Jonathan Chait is suitably scathing:

Of course, we already knew that congressional Democrats do not have the same strength of resolve as Republicans. But what's even worse is what this whole sorry episode tells us about Obama's ability to influence his allies in Congress. Obama has made the issue of raising taxes on the wealthy the cornerstone of his policy agenda for the last three weeks. Public opinion polls indicate that voters support letting tax cuts for the rich expire, and the move would take a nice chunk out of the annual federal deficit. But Senate and House Democrats are refusing to follow his lead. This is before an election in which they are going to get their butts kicked. It will be much, much worse afterward.