Few Americans will shed tears at the video chain's bankruptcy filing, but the hit to the U.S. economy could hurt 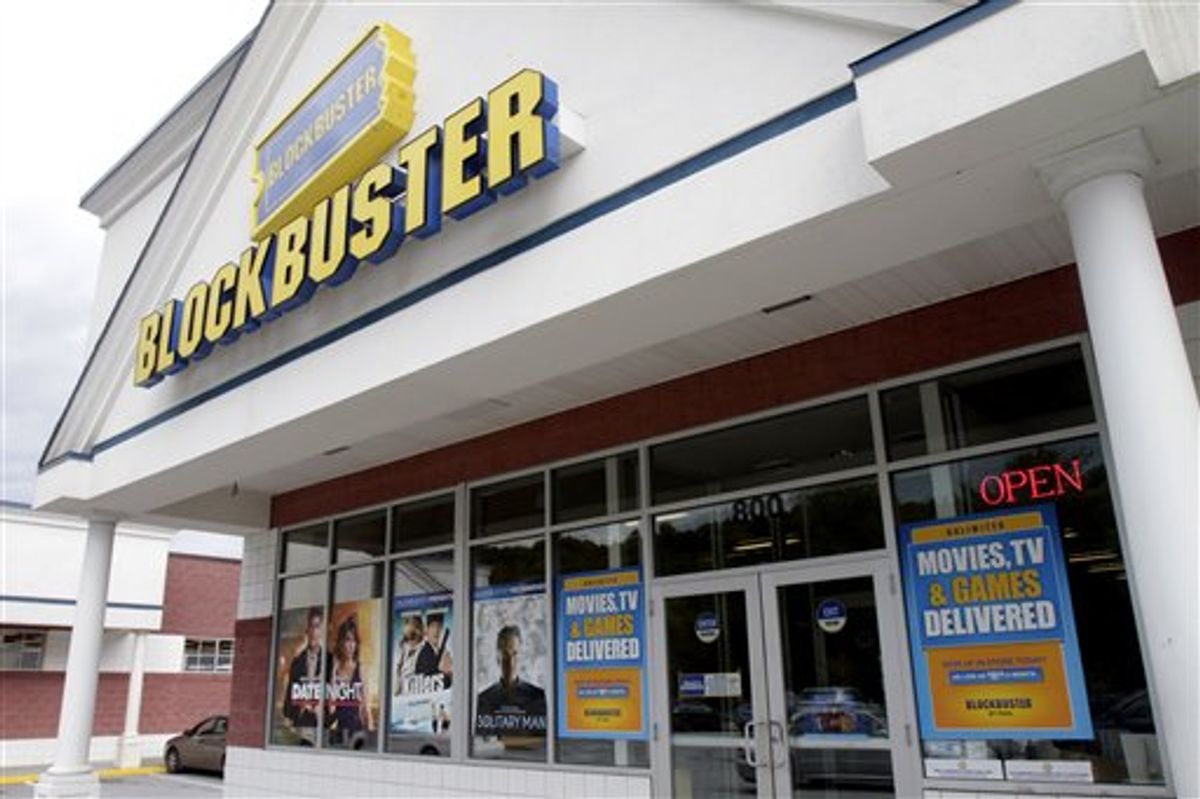 A large "for rent" sign hangs in the window of the building that used to house the only video rental store I ever loved. Berkeley's Reel Video closed in July, a victim of the bankruptcy of its corporate parent, Hollywood Video -- the store itself, which boasted a vast and eclectic film library, was profitable right up to the end, claimed employees. I'm not one who usually mourns the death of retail outlets, but I won't soon forget the sick feeling I felt in my stomach when my son and I walked up to the door and saw the handwritten "Closed ... Forever" sign. Just a short walk from my house, Reel Video's selection of films was incredible and its employees highly knowledgeable. Berkeley is a lesser place without it.

I shed no similar tears for Blockbuster, which declared bankruptcy on Thursday. The giant video chain never gave me a reason to like it, much less love it, for reasons that are too familiar to reiterate here. And I'm fully aware that consumer choice in the age of Netflix and on-demand video and rental kiosks is hardly limited by the demise of any video store or chain. But the empty shell of the store that was formerly Reel Video, with its blank windows gaping onto Berkeley's Shattuck Avenue, is a reminder, as bankruptcy lawyer Stephen Lubben points out in today's New York Times, that there are larger economic implications to the collapse of the video store rental model.

...[T]his represents yet another hit to the commercial real estate market. Although Blockbuster has yet to make clear its plans with regard to store closings, one of the crucial benefits of Chapter 11, as contrasted with an out-of-court restructuring, is the ability to terminate leases and cap the damages owed to landlords because of the termination. For a market already hit by several prior Chapter 11 cases -- how many of you live near an empty Hollywood Video or Linens 'n Things stores? -- the closure of underperforming Blockbuster stores will mean even more empty stores fighting for tenants.

In a press release, Blockbuster claims that all 3,000 of its currently operating stores will remain open. But that's hardly reassuring, considering that at the beginning of 2010, Blockbuster boasted 3,500 stores and two years ago more than 4,000. The company is in a tailspin and the bankruptcy restructuring seems likely to do little more than slow down the pace of its collapse.

At MarketWatch, Jon Friedman tells us that Blockbuster offers a a big cautionary tale to American businesses.

Remember, it wasn't quite so long ago that Blockbuster symbolized the future of commerce -- employing technology to make consumers' lives easier and more convenient.

But not convenient enough for the Netflix generation!

These days, it's all about convenience when it comes to giving the people what they want. They want convenience, pure and simple. Sure, in these hard times, we all want to find bargains as well. But mostly, it's about finding a reason not to drive to the mall.

It is amusing, and instructive, I think, to contrast Friedman's ode to the convenience-loving American with a Christian Science Monitor story reporting on how independent video stores that specialize and provide great service are thriving while the big chains crash.

Because people don't just want convenience. They also want soul. Reel Video had so much soul that I looked forward to getting off my couch and making the (short) trek to the obsolete "brick-and-mortar" building. Blockbuster's sin was that it had no soul and competitors that were more convenient. The question that bothers me is whether there's enough soul out there in the general economy to fill all the empty spaces that Blockbuster and every other big chain disintermediated by new technology are bound to leave gaping in the malls and downtowns of the United States.