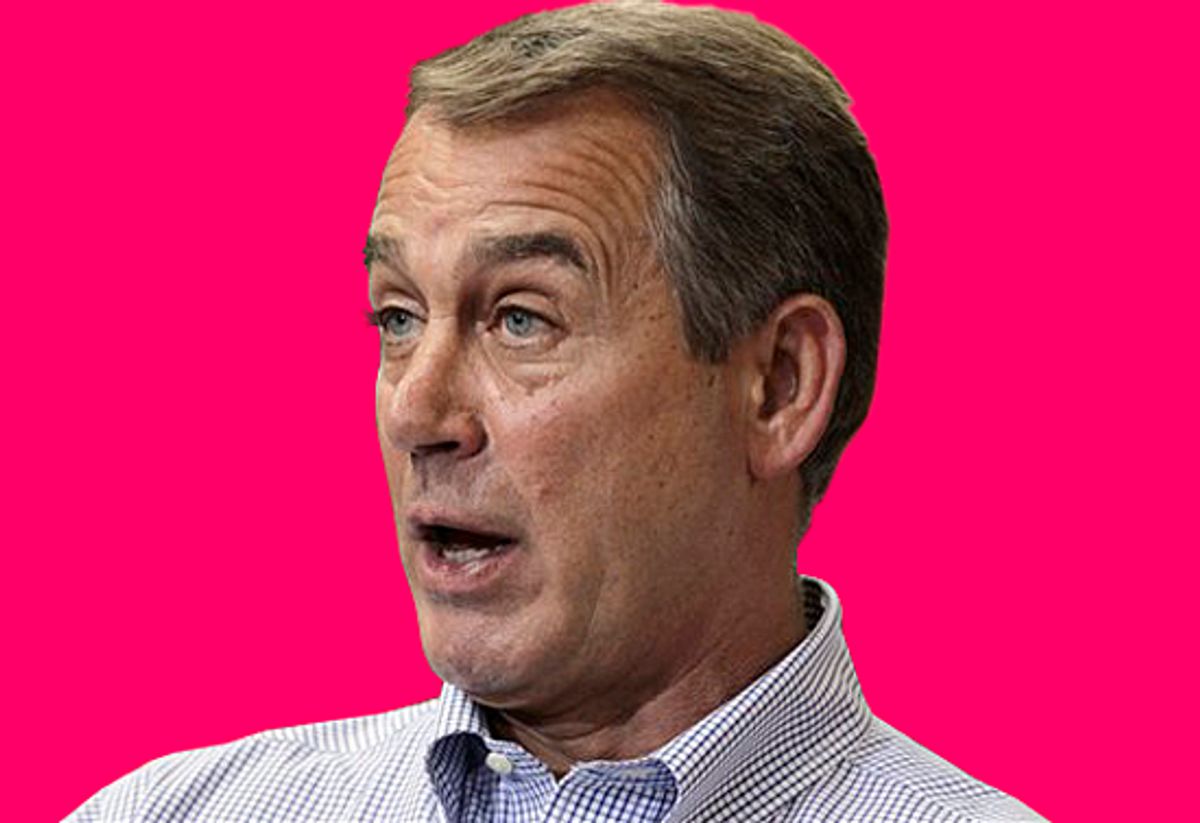 Sometimes, a member of the serious press likes to get in on the gossip action by reporting that someone or other is spreading some sort of rumor. This doesn't happen all that often, because editors tend to strip unsubstantiated gossip from copy at grown-up newspapers, but Dana Milbank gets this tidbit in at the end of his column today:

"Can I keep this as a souvenir?" the minority leader asked. He carried the cookware back to his Suburban, but before his security detail could whisk him away, Boehner was intercepted by a liberal blogger trying to implicate him in a sex scandal.

This was no way to treat a founding father.

Well! Just enough information to get the rumor out there, but not enough to actually allow a reader to figure out how trustworthy the source is.

That's why we have the New York Post's Page Six, which goes into the details of the rumor at some length, while ostensibly attacking the liberal blogger for spreading it. (A classic Page Six move.)

The supposed news is liberal blogger smearing Boehner. But Page Six is really reporting the smear itself:

A blogger from liberal Web site The Daily Kos pierced through Boehner's security detail at yesterday's unveiling of his leadership policy "Pledge to America" to ask if he was sleeping with a lobbyist from the Printing Industries of America.
[...]
The lobbyist who was named in the confrontation and then was contacted by he Daily Kos blogger Lisbeth Lyons denied the accusations. "As you can imagine, I was stunned by such a question," Lyons said. "I found it to be highly insulting, particularly as a female political professional, as well as unfounded. Beyond that, I have no further comment on the matter."

Insiders on Capitol Hill are buzzing about an upcoming New York Times exposé that will detail an alleged Boehner affair. Sources say the Times is looking for the right time to drop the story in October to sway the election, similar to how the Times reported during the 2008 presidential campaign on an alleged John McCain affair that supposedly had taken place many years before and that was flatly denied by the woman in question.

(For the record, the weird story about John McCain and Vicki Iseman ran in February of 2008, not October.)

The blogger in question is Mike Stark, an activist reporter who usually seems more interested in embarrassing and confronting Republicans than in digging up evidence to substantiate rumors he hears -- but if the Times is actually working on this, well, that's interesting. (And it still might mean nothing -- nearly every politician on the Hill is "rumored" to be a gay drug-addict.)