He accuses Democrats of being incapable of accepting political defeat, then proves he's no better at it 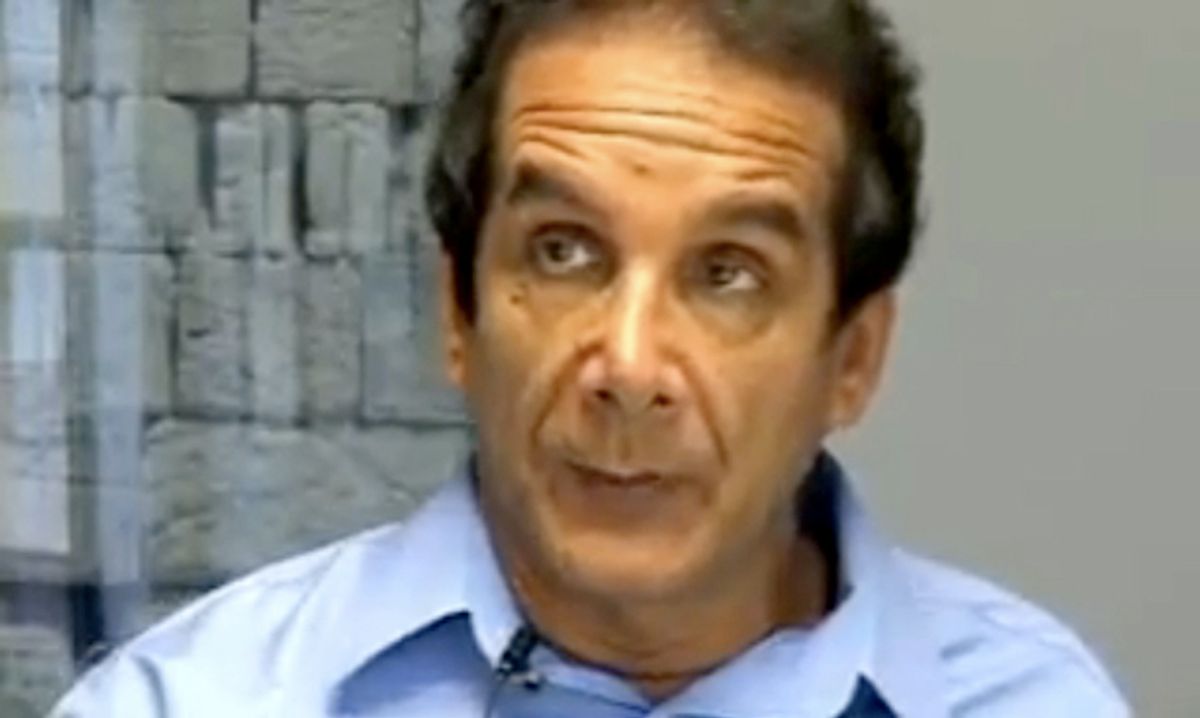 In an unusually shrill column today, Charles Krauthammer manages to be both disingenuous and historically inaccurate.

His premise is that Democrats, facing a crushing defeat in November's midterms, are in denial, distracting themselves with foolish talk about all of the damage that the Tea Party movement will inflict on the Republican Party.

It's nonsense, Krauthammer tells us, because -- with the exception of Christine O'Donnell in Delaware and maybe Sharron Angle in Nevada -- the Tea Party-backed Senate candidates the GOP has nominated are likely to win. Therefore, the Tea Party has been "a large net-plus" for Republicans:

The Tea Party could have become Perot '92, an anti-government movement that spurned the Republicans, went third-party and cost George H.W. Bush reelection, ending 12 years of Republican rule. Had the Tea Party gone that route, it would have drained the Republican Party of its most mobilized supporters and deprived Republicans of the sweeping victory that awaits them on Nov. 2.

Instead, it planted its flag within the party and, with its remarkable energy, created the enthusiasm gap.

Krauthammer is being disingenuous here. Those who point to the harm the Tea Party movement will cause the GOP are talking more about future elections than this one. As I've written, the structural factors that define the 2010 midterms -- joblessness near double-digits, slow economic growth, the buyer's remorse nature of midterm elections, total Democratic control of Washington, and the presence of so much low-hanging fruit for Republicans (i.e., marginal seats won by Democrats in the wave elections of 2006 and 2008) -- guarantee that this will be a big year for the GOP. Just as Democrats who are now vulnerable were able to slip through in the anti-GOP years of '06 and '08, Republicans who would ordinarily be unelectable can and will win in this climate. This includes many -- but not all -- of the Tea Party candidates who have won GOP nominations in battleground states.

But to say that this proves the Tea Party movement is a rousing success is absurd. The key measure isn't whether its candidates win or lose; it's whether they underperform -- and there's some evidence that this is happening. This should be a warning sign for the GOP: Sure, you can get away with turning the show over to the Tea Party crowd in a year like 2010. But in 2012? And 2014? And beyond? That's when the Tea Party could be the Democrats' salvation.

Krauthammer also flunks basic political history here. His statement that the presence of Ross Perot cost George H.W. Bush a second term in 1992 is utterly and demonstrably false. As I've documented before, Perot was actually absent from that race from July '92 (when he dropped out, suggesting that Republican operatives had tried to sabotage his daughter's wedding) to the end of September '92. In that entire span, not a single poll showed Bush leading Bill Clinton -- not even in the immediate aftermath of the mid-August Republican convention, when Bush got a polling spike. The numbers weren't even close. In most polls after Labor Day, Clinton led by double-digit margins, with his advantage stretching near 20 points in some surveys.

In other words, Bush had a two-way race with Clinton for 10 weeks in '92 -- and he was going nowhere. In fact, the numbers only tightened -- somewhat -- after Perot jumped back in the race. But even then, not a single poll ever gave Bush the lead, and in virtually every survey between Oct. 1 and Election Day, his deficit was outside the margin of error. Exit polls actually showed that Perot's voters preferred Clinton over Bush as their second choice by a 38 to 35 percent spread. Take it away, Washington Post article from the morning after Election Day:

Exit polls conducted by Voter Research and Surveys suggested that the presence of independent Ross Perot did not affect the national outcome, although his candidacy may have boosted total voter turnout.

Those who said they voted for Perot split almost evenly between Bush and Clinton when asked their second choice, and one-seventh of Perot backers said they would not have voted had he not run.

The Post, of course, prints Krauthammer's column. Apparently, it's fine with allowing him to use his forum to make a claim its own staff debunked 18 years ago. And apparently, Krauthammer is fine with demonstrating the exact same inability to come to terms with defeat that he claims Democrats are now exhibiting.