A Congress full of Newts 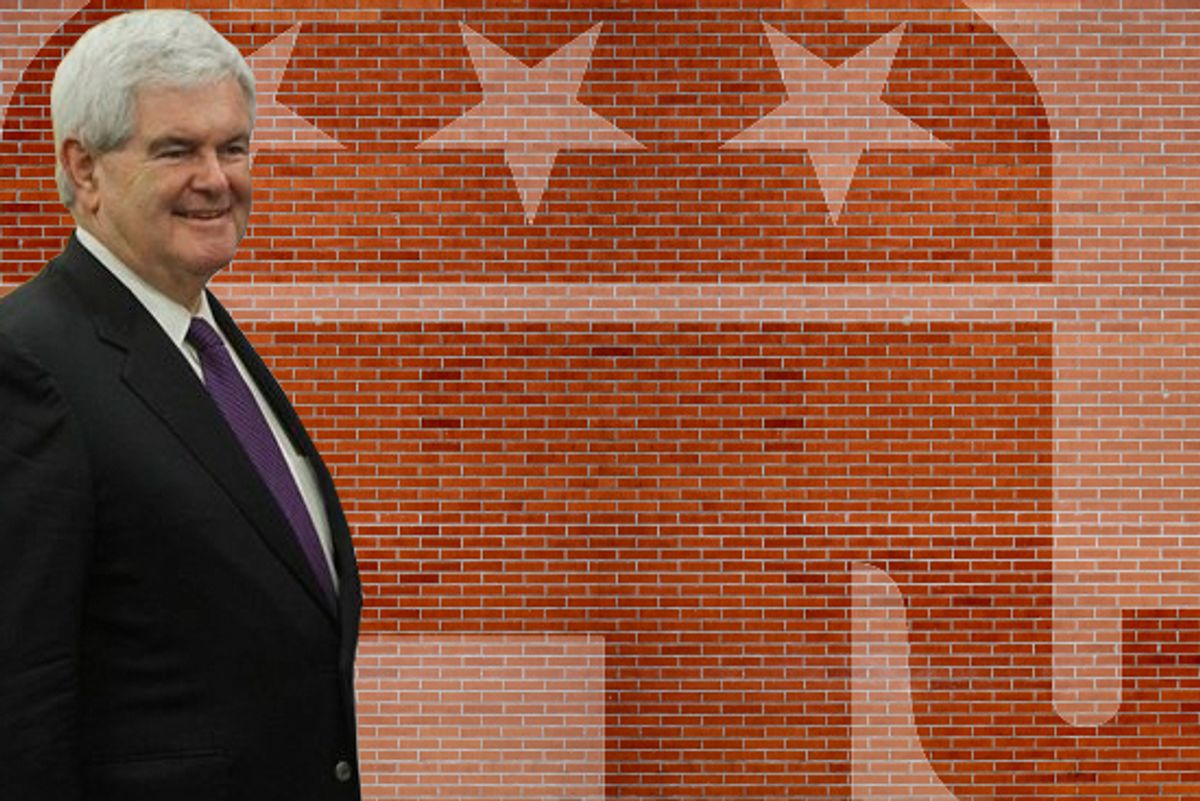 Bill Clinton warned on Monday night that a Tea Party triumph at the polls would be "Newt Gingrich all over again." While Clinton is right to be concerned about Gingrich-era politics, he’s wrong in thinking Gingrich ever left.

Though Gingrich himself may be reduced these days to baiting liberals with accusations of "Soviet tyranny" and "Kenyan anti-colonial behavior," American politics has been Newt Gingrich over and over and over again ever since he was first elected in 1978.

Many theories have been proffered to explain the increased political polarization of recent years. But according to a new paper by political scientists Sean Theriault of the University of Texas-Austin and David Rohde of Duke University, the increased Senate polarization -- and increased Senate dysfunction -- of the past three decades can be attributed to Republicans who were elected to the House after 1978, the year Gingrich was first elected.

Gingrich is known for seeking to transform the Republican Party after his election in 1978, exhorting the GOP to become more confrontational, more cohesive and more sharply defined. Under his leadership, Republicans sought to block potential Democratic victories at every turn with little regard for the collateral damage. But Theriault and Rohde's paper provides the strongest evidence to date of his strategy's enduring success, loath though we may be to admit it.

Gingrich is often credited with intellectual prowess, but what he really had was the raw cynicism to realize that the minority party has no political incentive to compromise or pass actual legislation, as the bulk of the credit would end up going to the majority party. Instead, Republicans have increasingly become the "party of no," seeking only to prevent Democrats from achieving policy goals.

Theriault and Rohde argue that Republicans elected to the House after 1978 were "baptized in the partisan waters of Newt Gingrich" -- a radicalizing experience that would resonate throughout their careers. Controlling for constituency and electoral factors, Theriault and Rohde show that Gingrich’s former colleagues in the House -- described as the "Gingrich senators" -- are a group with distinct characteristics. They are nearly twice as polarized as other Republicans, and significantly more conservative, more likely to support filibusters and less likely to work with Democrats toward bipartisan solutions.

It's not unusual for House members to move to the Senate, but this particular group brought the Gingrich philosophy of polarization and hardheaded political strategizing with them. Indeed, the Gingrich senators have been especially successful in turning the Senate's procedural oddities to their advantage, most notoriously by transforming the filibuster from a relatively obscure device most often used by screenwriters into a routine part of the legislative process.

But the Republican insistence on blocking any and all legislation with less than 60 votes has seriously decimated the Senate's ability to get anything done. Gingrich's partisan, scorched-earth approach to politics has produced disastrous results not only for Democrats, but for the millions of Americans who stand to benefit from extension of unemployment benefits, a new energy policy, or reduced healthcare costs. Indeed, the Dream Act and proposed repeal of "don't ask, don't tell" are just the latest policies to fall victim to GOP obstructionism. But the strategy has worked tremendously well for Republicans, who are now campaigning on the idea that Democrats can’t get anything done.

And though Gingrich may have been personally affected by his divisive image, Republicans in general have managed to avoid the brunt of the American public's professed distaste for partisan politics. Although the median Republican official has moved rightward faster than the median Democrat has moved left, Americans believe that Democrats are farther from the political center.

So what does this mean for the 2010 midterms?

For starters, it means that Clinton may have been understating the case when he worried that a Tea Party victory would result in "two years of unrelenting investigation of the White House, the staff, the Cabinet." Though Gingrich and his minions were arguably at the height of their power immediately following the Republican sweep of the 1994 elections, their approach to politics continued to shape the political climate for over a decade. The case of the Gingrich senators should serve as a reminder that relatively short-lived political trends can have disproportionately long-lasting effects.

This is particularly relevant for the coming elections, in which most conservative gains, whether Grand Old or Tea Party-endorsed, will be largely the product of the weak economy rather than a national ideological shift rightward. But the representatives elected due to structural conditions are likely to remain in power long after those structural conditions change, benefiting from a combination of the inertia of incumbency and the politically auspicious side effects of economic recovery.

Rather than seeing their victories as fortunate side effects of a devastating economic climate and general sense of unease, winning conservative candidates are likely to view themselves as lifted into office on the great tide of public opinion, handed an almighty mandate by the American people. And they’re likely to govern accordingly.

This may be an unexpected bright spot for Democrats: Republicans who believe they have a mandate to "take back America" are likely to overreach in the same way that House Republicans did after the 1994 elections. Indeed, talk of a government shutdown in protest of the Affordable Care Act can already be heard. (Good luck with that one.) Yet even if overreaching conservatives eventually provoke a backlash, they have the potential to do a great deal of damage in the meantime.

Just how much became clear yesterday when the GOP released its most recent manifesto, the Pledge to America. Like Gingrich’s famous Contract With America, the Pledge starts off with overblown rhetoric promising to restore trust and faith to an out-of-control, out-of-touch government and proposes a set of policies ostensibly aimed at cutting spending and lowering the deficit. Yet many of the solutions laid out in the Pledge -- like extending all of the Bush tax cuts -- would likely have the opposite effect. Critically, the Pledge follows the Gingrich playbook in blaming Democrats for inaction and failure to pass legislation after two years of Republican obstructionism intended to achieve just that.

So when conservatives bemoan that the "polarizing political environment [is] fraying the bonds among our people," let’s not forget where that polarization came from: the Gingrich House. Nor should we forget that political influence isn't limited to two-year terms. The threat posed by a Republican resurgence in the 2010 midterms isn’t a return to Gingrich-era politics, but a reinforcement of them.