In the strong season premiere, Olivia is imprisoned in alternate universe as her evil twin worms her way into life 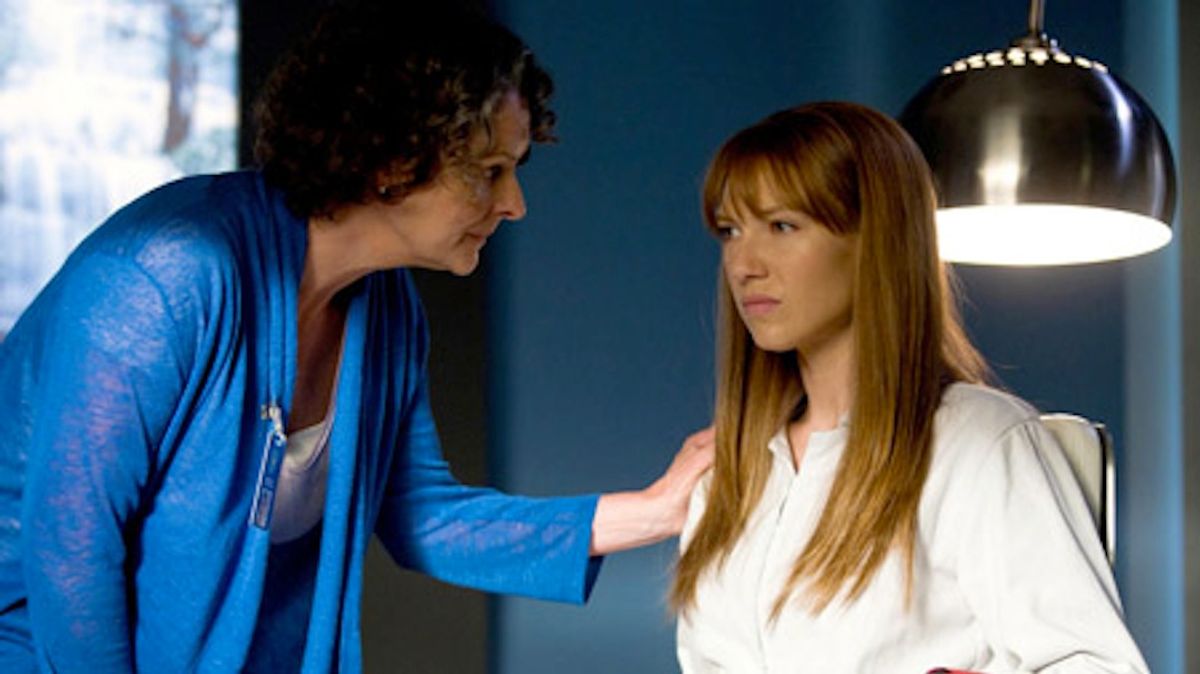 Previously on "Fringe": EVERYTHING. The show opens with an attempt to summarize the entire myth arc of the show in 45 seconds. I assume this is an attempt to help new viewers follow along with the new season, but honestly ... if you haven't been watching the show, you're probably not going to start now. "Fringe" happens to be scheduled in The Timeslot of Doom up against the reliable "The Office," the surprisingly good "Nikita," and the ratings juggernauts "CSI" and "Grey's Anatomy," not to mention Thursday Night Football later in the season. I'm not sure how many new viewers you're going to convince to jump on at this point, especially since what makes the show great -- intricate sci-fi stories that span multiple episodes -- is exactly what makes it hard for newbies to get on board.

Nevertheless, for those of us who have been eagerly awaiting the show's return, tonight's episode was a lot of fun. Part of what makes stories set in alternate universes fun is not only focusing on what's there (e.g. the World Trade Center towers) but what isn't there. It's noteworthy that William Bell, Nina Sharp and Massive Dynamic itself don't seem to have equivalents on Earth 2. Meanwhile, you have to think that it's only a matter of time before we run into Earth 1's version of Lincoln Lee (a.k.a. Burn Victim Guy).

We pick up season 3 right where we left off last season, with Olivia imprisoned on Earth 2. A psychiatrist is treating Olivia, trying to convince her that rambling about evil twins and alternate universes sounds a touch crazy. During these scenes we get a mix of exposition (again, for those who have never watched the show), plus some interesting tidbits about the other Olivia (a.k.a. Alt-livia), including the fact that she's an Olympic gold medal winner in marksmanship and that her mother is still alive in this universe.

Meanwhile, Walternate is busy colluding with the nerd scientist from Massive Dynamic (who in this universe seems to a lot less Sheldon Cooper and a lot more Dr. Mengele), trying to inject Olivia with Alt-livia's memories. Despite the fact that it could kill her, Walternate is hellbent on pushing his agenda, and he orders another dose of the whatever-it-is-MacGuffin serum given to Olivia.

Olivia is dragged into a brightly lit room and strapped to a table. However, before they can complete the procedure, she tricks her captors with the oldest trick in the book (the good old "Ah, my heart/stomach/whatever hurts!") and quickly turns the tables on them. As she flees the complex, necks are stabbed and throats are punched and it is awesome. She makes it outside and flings herself off the side of Liberty Island into the water. Despite the fact that there are literally twenty armed men chasing her on a well equipped island, I guess no one thinks to, you know, go get a boat or anything, so Olivia is able to easily doggie paddle her way to freedom.

Cut scene. Hey, it's Bubbles from "The Wire"! Hooray! Andre Royo looks pretty good when he's not all done up like a heroin addict. He's minding his own business, chilling in his cab (cleverly sporting an advertising tent on top for the hit musical "Dogs") when Olivia throws her bedraggled self into the backseat and promptly hijacks him at gunpoint. Poor Bubbles -- even in this universe, he can't catch a break.

Olivia spends the rest of the episode alternating between threatening to murder Bubbs and his whole family and cruising around town trying to figure out a way to get back to Earth 1. At the same time, Alternate "Fringe" Division is busy zeroing in on her position. It's interesting to note that Charlie and Lincoln seem to buy the story that Olivia is really their Alt-livia and is merely suffering from some kind of head trauma. It's also interesting that even in this world, poor Astrid is given nothing of value to do aside from delivering lines of exposition.

The stress clearly gets to Olivia, because she breaks down sobbing in a gas station restroom, before she ends up blowing it up. It's all very sad and hilarious at the same time. Olivia Dunham, domestic terrorist and public menace!

Finally Olivia is out of options and demands that Bubbles drive her to a safe house nearby. At this point, there are a lot of clues that the MacGuffin serum is starting to take effect -- she starts to forget about her love for Peter, she is suddenly a world class shot (a nice callback to that seemingly throwaway fact about Alt-livia's marksmanship), and she magically knows the way to Alt-liva's mother's house. When Olivia sees her mother (played by the awesome Amy Madigan) alive, she breaks down and it seems like she's completely taken over by Alt-livia's memories and personality. Oh noes! Honestly, after the trauma of the last three episodes, you can't really blame poor Olivia for giving in -- in this world, her mother is still alive, her partner Charlie is still alive, plus they have dirigibles and vacations on the Moon! Earth 2 rocks. I want to live there.

Olivia ends up driving back to Alternate "Fringe" Division with Charlie, already displaying the tics and mannerisms of Alt-livia. Bubbles is still outside as he watches them drive off and for a minute you think that maybe he'll follow them, but instead he just drives off in the other direction, probably to go call his good friend, the sober and serious James McNulty, to tell him about his crazy day.

The episode ends as we transition back to Earth 1, where Alt-livia is busy making creepy eyes at Walter and macking on poor, sweet, clueless Peter. It's a testament to Anna Torv's acting that the season 2 finale kiss gave me a thrill, and now seeing her kiss Peter just makes me scream, "Noooooo! Get away from him, you whore!" at the screen. The Bishops walk off, completely unaware of the traitor in their midst.

All in all, this was a great start to the season. It'll be interesting to see how long Alt-livia can fool the team. I suspect that Walternate has no intention of bringing Alt-livia back to Earth 2, which is why he has Olivia all primed and ready to replace her. I also enjoyed seeing Andre Royo again, so I'm hoping he will pop up again in the inevitable episode where Olivia recovers her memories and tries to get back to Earth 1.

Summary: Always have a safety word installed with your loved ones, in the event that an evil doppleganger from another universe tries to take your place. For the record, mine is "banana."