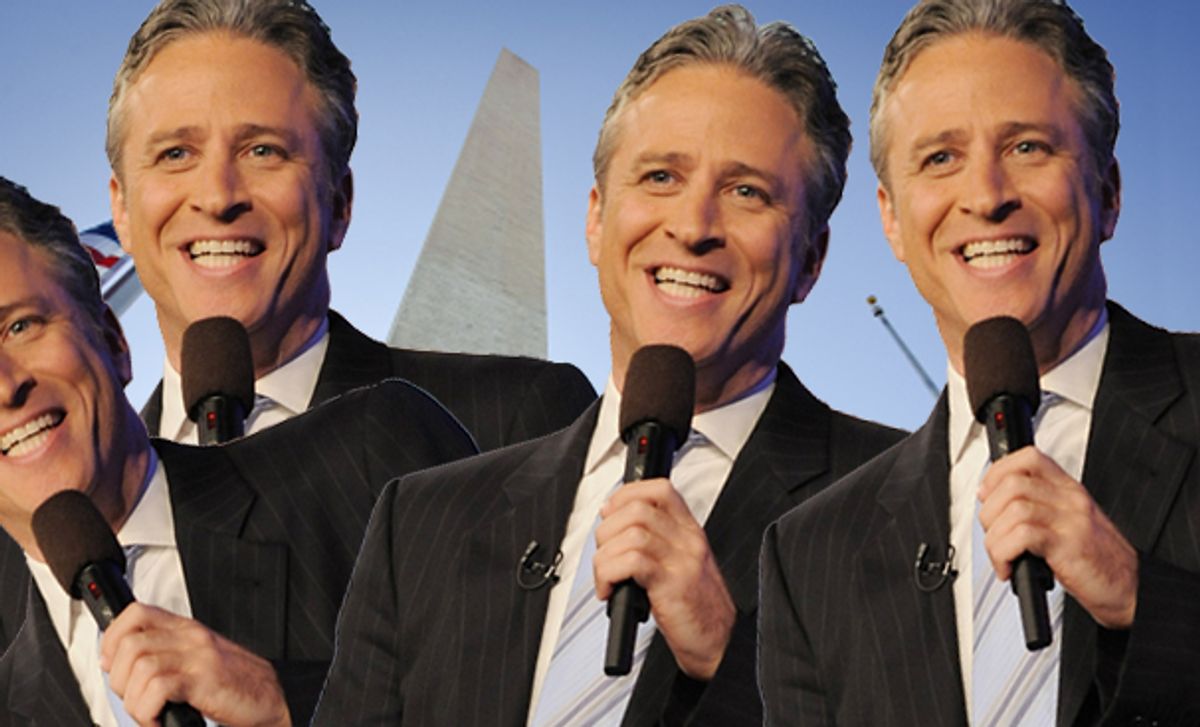 Jon Stewart's announcement last Thursday of his "Rally to Restore Sanity" on Oct. 30 has, not surprisingly, generated significant interest from "Daily Show" fans. (The current number of people signed up on the rally's Facebook page is 140,000). But it also prompted some confusion, even from longtime fans. What is Stewart trying to achieve? Does this mark a more formal embrace of politics? Will this change the way he's perceived?

Salon spoke to Taylor Branch, Pulitzer Prize-winning civil rights historian and scholar of mass political movements, about Stewart's role in popular culture and politics and what benefits and risks the rally holds for him. (We also asked Branch about the controversial New York Times Op-Ed he recently penned expressing sympathy for Glenn Beck's 8/28 "Restoring Honor" rally.)

What do you think the goal of Stewart's rally is?

Well, I don't know. He always says his job is straightforwardly to entertain and poke fun at the news.

Do you think that's true?

Do I believe him? I don't know. He has stepped out of that role a couple of times. Years and years ago he went on "Crossfire," on CNN, and scolded them, saying that they were just entertaining people with emotional argument for argument's sake, without any interest whatsoever in asking any questions or solving any problems. And that therefore it was just entertainment -- and that that was his job. That seemed to be a foray into serious politics, you know, saying, "I'm supposed to be the clown, not you guys." I don't know whether that's what he has in mind here or not, because he hasn't really said. But I think whenever people in a public position like that do things that are unexpected, that involve some sort of surprise and or risk, we need to pay attention to what they say, because maybe it'll provoke something new.

Well, [there is a risk] if he gets serious and goes out there and tries to be a politician himself, and recommend what needs to be done. He can afford to do that only in small doses, because otherwise he'll become one of the politicians that other people are lampooning.

One of the major themes of Stewart's announcement was his desire to attract "reasonable" people. Is there any historical precedent for this -- for an event that sells itself as something primarily for moderates?

On the face of it, yes. Politics, when you're actually trying to do something, is about moderates. Extremists can push things and raise new questions, but what made [King's] march on Washington significant in 1963 was that a proposition to change the power relations of the entire South, which had seemed preposterous and hopeless only a decade before, suddenly was in the range of passage in the Congress, because a bill to do so had been introduced by the president. On the one hand, the country was scared to death, because it was totally unfamiliar with the idea of black people on the main stage of national politics; on the other hand, they were rallying to support a bill that had been introduced by the president -- a bill that did pass the next year. So it's obviously moderate. Things that are political on the Mall are often about things that are moderate, because they're trying to direct people's attention to things that are important. They're not all fringe groups; they're not all George Lincoln Rockwell and the Nazis. I really don't know why Jon Stewart did this -- to one degree, he might be at risk of overplaying Glenn Beck's rally rather than dismissing it. If he's trying to respond to it by answering it, that elevates it.

Some suggest Stewart is not "answering" Beck's rally at all, but rather that he is trying to take the media to task for magnifying the voice of a tiny minority of the population (in publicizing events like Glenn Beck's rally and Tea Party meetings), by showing that he can succeed in gathering however many thousand self-proclaimed moderates, just for an afternoon of anything but political polemic.

Well, that's a very, very political ambition. I don't know whether it will work -- it might be very boring. To the degree that he's complaining about the level of public discourse that is guided and shaped by the media, I think he's right. He's lived off of that on his show forever, but his show is his self-proclaimed medium, and he's never proclaimed a serious purpose -- or very, very seldom -- on his show. People have to guess what that purpose is, because he's an entertainer. So this is a different kind of thing. If he goes down there and says moderate things at his rally, he'll bore people to death.

In terms of comedy, I think Stephen Colbert is also toeing a fine line with his "Rally to Keep Fear Alive," because to me the politics of fear-mongering is very unhealthy. It's old and it's been around forever, but we seem to be in a pretty severe patch of it. On the other hand, if you ridicule fear in a blanket way you risk overlooking the fact that there are a lot of people who are genuinely afraid in this economy and in this political world. They're afraid, and they're confused. You know, some of the people at the Glenn Beck rally may be fearful and confused as much as they're hateful, which is what people's image of them is. Fear-mongering is a bad thing, and it really has driven a lot of our political discourse, and it's good to make fun of it. But a lot of the fear in today's world is real.

I suppose the real question might be: Even though Stewart is painting his rally as a comic event, might this, in its own way, be as earnest as a rally held by Glenn Beck?

[Laughs.] Well, I think it's a big venture and I don't really know. I will say this about the media. In my view, the biggest change in the media, which is not healthy, since the civil rights era, is how comfortable we are today in presuming in advance what people's motives are, and writing about people's motives rather than what they actually say and do. I don't really know what Stewart's motives are, but since he does have a following and this [rally] is very unusual, I recommend listening to what he actually says, and then forming a judgment about whether this was primarily for entertainment, or whether he's tired of just being a comedian and wants to actively try to influence the political world.

So we have to wait and see?

I think so. The only way we can divine his motives is on the basis of our own preconceptions about the world. And that's not a good formula for politics, I don't think. But we'll see. I'm looking forward to it.

Some people who are familiar with your work were a little bit surprised to read your piece about Glenn Beck's "Restoring Honor" rally in the New York Times.

Yes, my goodness, I've been pilloried by all of my old friends.

When somebody does something surprising, I think at the very least we should listen to what they say. I think most of the people that reacted to my column about Beck didn't listen to what Beck actually said at the rally. We're all very comfortable in the labels that we apply to everybody else right now; [most of my critics] didn't see the label "Glenn Beck" and the label "Martin Luther King biographer" as going together, so they were shocked when I said, you know, listen to what he actually said, he's talking about nonviolence, he's talking about going to any church, mosque or synagogue where they're not preaching hatred. It's not what you expect from Glenn Beck.

So you stand by everything you wrote in the New York Times?

Oh, absolutely. My mom's been upset, because she said she tuned in to some of his shows afterward, and he said such hateful things that she had to turn it off. But then she called back the other day to say he had the head of the American Alliance for Jews and Christians on there talking about bigotry, and some relative of Gandhi talking about nonviolence. She said, "I don't know what to make of this stuff."

I knew I was going to get in trouble with a lot of people when I wrote that piece, but nothing good comes without a risk. I don't even know when [Beck's] show is on -- quite frankly, the irony is, the only Glenn Beck I've ever seen other than that rally, which I felt a duty to sit down and not only watch but to transcribe and to study and that sort of thing, was on Jon Stewart's show! Because [Stewart] has clips of Beck all the time. That is literally the only place where I've ever seen Glenn Beck. I haven't watched his show even once. I've only heard a report from my mom.

Is there a possibility, then, that since you hadn't watched any of Glenn Beck's shows before the rally, you might have taken the rally out of context?

I don't know that his previous shows set a context for the rally. The rally was a three-hour event on its own. It was a surprise to me that he wanted to do this; I wanted to find out about it, but I didn't feel that I needed to go back and listen to every Glenn Beck show. I do feel that, if Beck were to say that he was going to have another show about Martin Luther King or King's legacy, I have a responsibility, having to some degree vouched for what he said on one day, to look at it and to report on whether or not he's being consistent. But I haven't heard of anything like that to investigate, and I don't feel that I bought in to have to monitor him every day. My mom says he says pretty outrageous things at least two-thirds of the time.