How we made it through my husband's affair

When he told me he was sleeping with someone else, I thought divorce was a no-brainer. Turns out, I was wrong 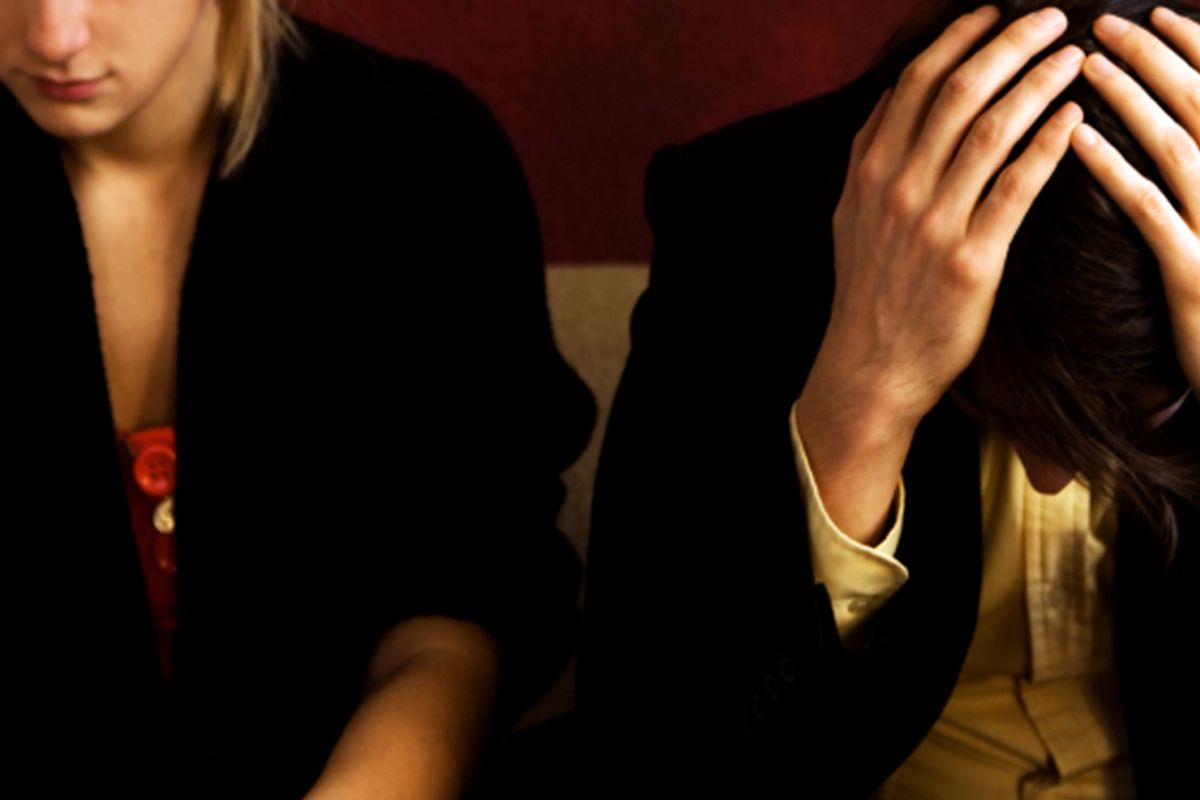 When I first found out about my husband's affair, I wondered if he'd been wearing clean underwear.

My husband is a veterinarian, and his work can be so messy that blood and other fluids seep through his jeans, right down to his skivvies. Was the woman who was trying to steal my husband also judging my ability to get my whites their whitest? That might be more humiliation than I could take.

When Robert told me about the affair, we were walking from marriage counseling through the arboretum near campus. We'd been in therapy for a couple of months, but we'd been fighting much longer than that.

"I have to be honest with you," he said, slumping onto a park bench, looking ill. "I'm sleeping with someone else."

There it was: the simple truth, the boil lanced. The air was still and calm, and I thought, but he wears that old scruffy underwear to work, and they never look clean.

I always imagined an affair would be more like James Bond, a heated tryst on high-thread-count sheets. Here was my husband banging his vet tech in the front seat of his truck on a country road.

"We should get a divorce," I said.

He put his head in his hands. "That's the last thing I want."

I didn't get it: Why would you risk your marriage to be with someone else, then change your mind as soon as you were free to have her, reverting back to your boring, bossy wife?

I told him to move out. He asked to stay, telling me he wanted to be near me and our son till we figured things out.

I didn't realize how literally he meant that: He borrowed a camp trailer and parked in the alley behind our house. Turns out our separation, like his infidelity, wasn't what I anticipated. He left, sort of -- but dammit, I was still on the hook for the laundry.

My sister told me the only wise thing to do when a woman learns her husband is having an affair is to divorce him. The house would sell for a profit, I had a great job and he would pay child support and stay involved in our son's life. He'd broken his vows and therefore I was now eligible for a single-use get-out-of-marriage-free card. It was a no-brainer.

So I went for a meeting with a divorce mediator. Ours wasn't going to be an ugly split; his guilt and sorrow and my shock and ambivalence were the perfect ingredients for a fair settlement.

I walked in the door of a brick building (ironically located in the same building as our marriage counselor) and began crying as soon as I gave the receptionist my name. Moments later a lovely woman at a wooden desk told me my options, explained the pricing, then left me with this advice: "You don't have to rush this. Make the decision when you're ready."

I left the building still sobbing into a wad of soggy Kleenex.

For the next several days, I took a one-day-at-a-time approach toward working through the hurricane that had made landfall on our marriage. For one day I'd live with him living in the trailer out back. One more time we'd go to counseling. Just for one day I'd try, mainly for the sake of our son, to see if there was any part of our marriage that was salvageable.

When an affair takes place in a big city, like New York or Los Angeles, I imagine there is some armor of anonymity. The body blow of those words -- I'm sleeping with someone else -- might disappear into the rumble of the subway or melt like a popsicle on the sizzling pavement. Not so in a small town. My parents live four houses away and couldn't help noticing the addition of a large borrowed camp trailer in the alley behind our house. Secrecy wasn't an option, even if we wanted it.

My mom, when I told her, cried with me. She cried for me, for our son, and she cried for my husband, too. "He's like a son to me," she said. And then, one day when I wasn't home, she marched herself down to talk to my husband alone, like a son. She told him how disappointed she was with him, she told him she loved him and that he had a long road ahead of him. Robert listened.

I knew telling our friends was next. But then, tragedy struck. A childhood friend who was at long last pregnant with multiple babies lost three of them, and the remaining tiny infant survived on life support in a nearby hospital. After the funeral service my other friends and I sat in a big SUV at the cemetery awaiting the arrival of the rest of the mourners.

I burst into tears.

The emotion of the funeral, coupled with the love of my childhood friends gathered in one place, was overwhelming. So, despite the inappropriate timing, I told them the story. We sat in the SUV, holding hands from our various seats, shoulders shaking with sobs.

Bystanders never knew how much loss we mourned that day.

The process of reconciliation was laborious, but Robert threw his heart into fundamental change. He started seeing an individual counselor and began to dig deep into the reasons for his infidelity. I made changes too: I learned that I had to work to better express my wants and needs to Robert. I learned that my confidence and self-sufficiency could shut him out. Then Rob, who grew up a Jehovah's Witness but left the church as a teenager, made good on a decade-long commitment to himself to become a Catholic. He asked me to be his adult sponsor on this year-long spiritual journey and together we grew closer studying the meaning of the Mass and the church we'd long attended together.

The reconciliation hasn't come without costs. I started having panic attacks after Rob's affair that I've tried to manage with counseling and medication. I've always prided myself on being able to predict change, but being clueless about the affair, being so naive as to believe my husband would never lie to me, threw everything else into question. If I couldn't trust my partner to be faithful, how could I expect a bridge to hold me up, or a plane to stay in the sky?

Robert moved back into the house from the camp trailer after about three months, but five years later I'm still taking our marriage day by day. In many ways, I believe that is the way any marriage should be lived. Each day I work at my marriage a little. Each day I find value in my marriage. Each day I go to sleep glad he's by my side.

We celebrated our 15th wedding anniversary recently at a lovely dinner overlooking the ocean. Rob reached across the table and held my hand. "Thanks for sticking with me," he said, as my eyes filled with tears and an astute waiter wisely waited in the wings.

My marriage to Rob is not the same marriage we started with when, doe-eyed, we said our vows at the church in front of our family and friends 15 years ago. No, I'm not glad the affair happened, but I'm glad to have survived it. The hurricane didn't tear us apart. Improbably, it made us stronger.

Clare Hunter is a pen name for a writer who lives in Northern California.