The Larry Summers hall of shame

His tenure in the Obama White House was just like the rest of his career: Full of controversy 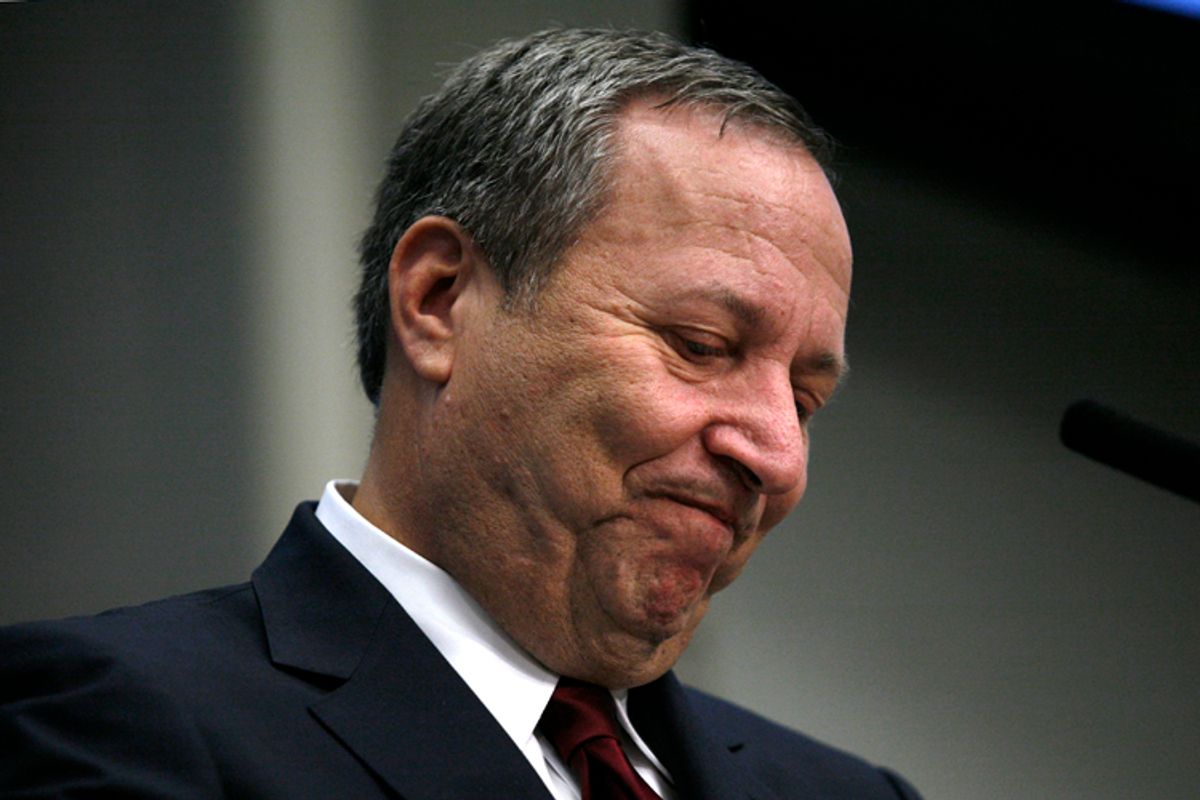 Note: This piece has been updated since its original publication.

This week's announcement that Larry Summers will be stepping down as director of President Obama’s National Economic Council may have been most notable for the passionate reaction it prompted from his critics. "Good riddance," wrote the Progressive's Matthew Rothschild, adding that "Summers has a resume of disaster."

The outpouring shouldn't have been surprising. If nothing else, Summers, in his stints at Harvard, the World Bank and in two presidential administrations, has emerged as an accomplished lightning rod for controversy. As he prepares to decamp Washington for Harvard Yard -- he's going to be a professor -- we remember the 10 most shameful moments that Larry has brought us.

10. Asking Chris Dodd to remove post-recession caps on executive pay: Summers ran into a bit of trouble after it leaked last year that he had received free rides on Citigroup’s corporate jet while months before working for the Obama White House. More appalling, however, was his subsequent decision effort to exempt Citigroup, a stimulus TARP recipient,  from caps on executive pay.

9. Gambling away $1 billion of Harvard’s money:  Sure, it was unlucky that Summers' stint as president of Harvard from 2001 to 2006 overlapped with the derivative craze of the mid-2000s, but he pushed to invest $3.5 billion in the complicated financial instruments -- even though he knew the risks better than most. Only after Summers was fired did the market crash, taking $1 billion of Harvard’s money with it.

7. Joking about dumping first-world waste in third-world countries: During his tenure as chief economist of the World Bank from 1991-93, Summers came under fire when a memo leaked that explained the "impeccable" economic logic of "dumping a load of toxic waste in the lowest wage country." Another employee took the blame, and Summers defended the memo’s tone as sarcastic, but the world now knew: World Bank economists were joking about dumping waste on people whose lives they viewed as useless.

6. Bailing out white-collar criminals:  In 2000, Andrei Shleifer found himself accused of insider trading. The Harvard economist had been in the process of overseeing the privatization of Russia when the U.S. government slapped him with a $26.5 million conflict-of-interest lawsuit for illegally purchasing Russian stocks. Luckily for him, his close friend Larry Summers soon became Harvard's president. The university picked up Shleifer's tab and allowed him to  return to his position at the school, successfully completing one of the first corporate bailouts of the decade!

5. Blaming the California energy crisis on excessive regulation: In 2000, Summers and Alan Greenspan improperly identified the government, not Enron, as the main culprit in the California energy crisis. Together, they argued that only through deregulation and unconditional support for energy companies would the state possibly curb rapidly rising energy costs. They were wrong -- it was Enron, of course -- but the larger problem was Summers' unwillingness to question the cure-all powers of the market.

4. Opposing regulation of the derivatives markets: No one could have foreseen the havoc that would unfold when the derivatives market -- and Wall Street -- imploded in 2008. What's remarkable is that Summers somehow predicted the exact opposite. While a member of Clinton's Working Group on Financial Markets in the late 1990s, Summers helped to fend off repeated attempts to regulate derivatives in Congress, at one point even alleging that proposed regulations would likely lead to the "worst financial crisis since the end of World War II," according to an account by Michael Greenberger. He had it the wrong way around.

3. Ragging on unemployment insurance: Early in his career, Summers made a name for himself by denouncing the unemployment insurance that is today keeping millions of families afloat. Many of the claims remain familiar talking points 20 years later, the most famous of which states that unemployment insurance "extends the time a person stays off the job" -- i.e., makes you lazy. Somehow, Summers forgot to take into account that structural changes in an economy can periodically leave workers without any work at all.

2. Advising Bill Clinton against signing the Kyoto Protocol: In retrospect, the 1990s was the perfect time to pass climate change legislation. The economy was booming, the country was nearing full employment, and there were no serious wars to wage. But as Clinton's Treasury secretary, Summers wanted to keep the party going, and fought hard against any and all attempts to cap fossil fuel emissions. Clinton listened and declined to sign the Kyoto agreement.

1. Lobbying for the repeal of the Glass-Steagall Act: Ironically, Summers' greatest miscalculation might also have been his most forgivable. It came in 1999, when he celebrated the repeal of certain key provisions of the 1933 Glass-Steagall Act, which had served as a safeguard against financial speculation. Summers called the decision "historic," and applauded as investment banks reunited with their commercial companions for the first time since the Great Depression. Whoops. If anything, maybe Summers' real problem was simply naiveté. You want to think people will play by the rules; it's hard to work the numbers when they don't.

Maxwell Strachan is an editorial intern at Salon.com. You can e-mail him at mstrachan@salon.com.