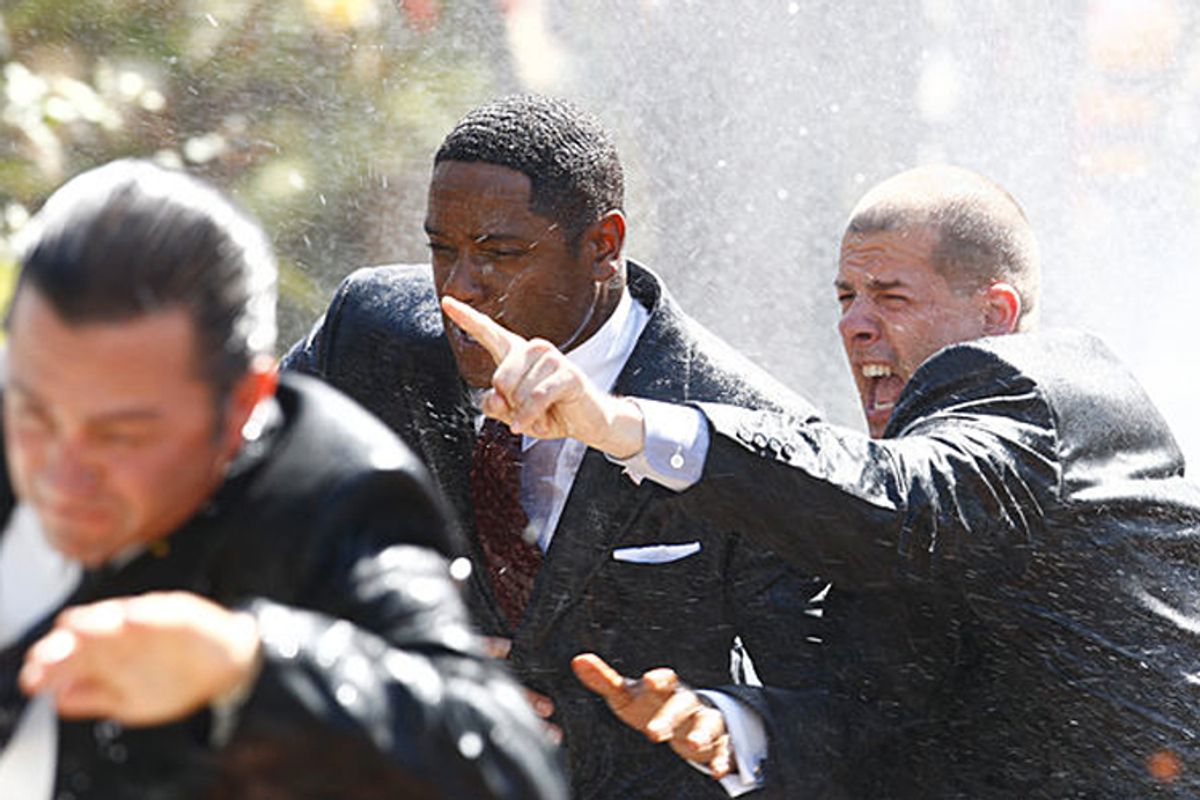 Blair Underwood (center) in "The Event"
--

Within the first few minutes of NBC's new serial drama "The Event" (Mondays at 9 p.m.), we're besieged by a rapid succession of cliffhangers: A hijacked plane is barreling out of the sky, toward the president's compound! A young woman disappears from her room on a cruise ship without a trace! Her family is attacked by a masked team firing guns! Her father turns out to be the pilot of the hijacked plane! Prisoners in a secret government facility talk in hushed tones about the consequences of the public finding out about … the event!

And through it all, we're treated to a steady flow of breathless dialogue the likes of which is aimed at keeping this serial drama in motion:

"They have a hidden agenda. I know it in my bones."

"You are my only conduit to the outside!"

"We have to protect ourselves. Can I count on you?"

"I haven't told you everything!"

These mysterious statements, obscure confessions and creepy generalities tend to fall into the same categories as those offered week after week on "Lost": 1) What's going on? 2) Who's in charge here? 3) What aren't they telling us? 4) Who is lying? 5) Why should I join/trust you? 6) How do we stop this catastrophe from happening?

But can you keep audiences intrigued using a formula already well honed by "Lost," particularly when that show didn't exactly end with a gratifying slew of answers to the million and one mysteries thrown out like cookie crumbs over the course of several years, but rather devolved into a hazy heavenly conclusion filled with hugging and learning? Consider the late-night haiku my friend Jon Grotenstein e-mailed to me during the waning minutes of the "Lost" series finale:

Gave us "The Love Boat"

Casting aside the oddness of friends who write haikus about television shows (or people like me, who fancy such prose worthy of "Ploughshares"), the looming question for even the most fervent serial-drama lover today is: Will any of this add up to anything? Will I invest my precious nighttime hours each week, only to discover that they're all really giant garden slugs, it's all been one big dream, or that they all wind up in some pre-heaven way station, smiling warmly at each other, embracing, shedding some tears, and then walking peacefully toward the light? Because if that's the case, I'd rather flip over to the sitcom about the wisecracking couple who met at Overeaters Anonymous (you know, the one that treats overweight people like human beings, mostly by showing them inadvertently destroying furniture and prattling on about hating exercising and wanting dessert so bad they could kill for it).

Similarly, though, pretty much every single character on "The Event" seems to want something so bad they could kill for it, from the mysterious lady locked in the government facility at Mount Inostranka in Alaska to the scared pilot who hijacks a plane because he's afraid some masked strangers are going to execute his two daughters. The big trouble with "The Event" isn't that the stakes aren't high enough (they're sky-high) or that the characters don't have clear motives for taking the desperate measures that they take. The real problem is, we don't care because there clearly isn't any larger meaning guiding the action, and the only thing we know about each character is that he/she totally loves his/her fiancé/wife/husband/children sooo much that he/she would do anything to keep them safe.

In a country where many viewers don't have a lot of thoughtful or idealistic notions outside of a "love of family" -- worthy though this love obviously is -- this is what passes for character development and premise, over and over again. Even on the most popular TV shows and movies out there, this is often the one humanizing factor, the one guiding principle, the one very simple central thrust of the entire narrative. Even in a smart psychological thriller like "Inception," what do you ever know about Leo DiCaprio's character, other than that he loves his wife and wants to get back to his kids? What should merely be a character's motive stands in for almost everything else, so that all we get is an enormous layer cake of action, all balancing on the faces of two young children. By the time we see the kids' faces, I half expect them to be hideous monsters or extraterrestrials. (If only.)

Despite a promising and popular premiere -- almost 11 million viewers tuned in last Monday night to watch -- not only does "The Event" strain credulity over and over again in the next two episodes, but we don't learn anything new about the characters themselves. In fact, they appear to be lifted whole-cloth from other sources and plopped down in the middle of the action without any extra flourishes or quirks. Sean Walker (Jason Ritter) is an earnest guy who just wants to save his pretty fiancée's life. Sophia Maguire (Laura Innes) is a world-weary prisoner doing whatever she can to fight for her own freedom -- or stick it to The Man, or take over the universe, it's hard to tell which. President Elias Martinez (Blair Underwood) is an idealist who sometimes lets his principles (whatever they are) prevent him from making pragmatic decisions as a leader. Even in an action-suspense series that's not character-driven, these aren't actually characters at all, they're cardboard cutouts who repeatedly growl lines like, "We can't trust anyone!" and "You still might have time to save her, but you have to go now!" In one flashback of Sean Walker's life before the world went mad, which presented a rare chance to teach us something about him beyond the fact that he speaks in a nasally garble and neglects to shave his patchy facial hair, we watch him go goo-goo-eyed for his fiancée back in college. She's cute, he's cute, they like each other, end scene. If we really wanted to watch simple-minded teenagers flirt, wouldn't we be tuned in to the sassy gaggles of catalog models on the CW instead?

In fact, after three full hours of "The Event," it's easy to suspect that we'll spend the rest of the season watching President Martinez argue his principles to the head of the CIA (who we know is evil, because he's played by Zeljko Ivanek), while Sean runs through crowded hospitals as half a dozen cops make chase, stopping occasionally to plead with others to help him find his lady!

Whether or not there are glowing clouds in the sky that can beam hijacked airliners to the middle of the desert, whether or not the CIA is populated by bad guys or those earnest detainees are evil or Sean's fiancée is not who she says she is, whether or not it's all a dream or they're all part of a government experiment or a corporate conspiracy or they're all secretly lizardy alien predators underneath their skin, it hardly matters. We've learned from our experience with "Lost" that all the Dharma Initiatives and Hanso Foundations and black smoke clouds in the world won't save us from an endless trek through a jungly island maze as the same minor chords slowly increase their tempo.

But as repetitive and endless a Möbius strip as "Lost" proved itself to be in its final seasons, at least it was provocative for the first three -- and at a minimum mildly intriguing after the writers started to resort to a steady flow of gun-wielding thugs and acts of God. At least we knew who Jack and Sawyer and Kate and Locke were before and after they landed on the island. Thanks to some great character-driven flashbacks during the first few seasons, we knew their backgrounds, their fatal flaws, their philosophies, their soft underbellies. Throw in The Hatch and those numbers counting down and Ben Linus held hostage but still spinning lies and those old Dharma Initiative films, plus some genuinely unnerving twists (that often turned on complex character motivations), and you've got a damn good TV show. Taken alone, the first three seasons of "Lost" were a smashing success on almost every level, and the last three were intermittently intriguing.

After its flashy premiere, which seemed to suggest that we'd learn more about these characters in weeks to come, all "The Event" has for us in the next two episodes is a few bizarre revelations that feel at once underwhelming and premature, and some explosions and car crashes. In an obvious attempt to give us enough clues and answers along the way, the show's writers only prove that every path here leads to implausibility, clichés, empty moodiness and things that go "boom." Maybe this is what will ultimately redeem "Lost," in the wake of its "Love Boat" ending: a steady procession of serial dramas with far less brains and flair, unraveling over the course of six episodes instead of six seasons. Suddenly it feels more than a little impressive that the "Lost" writers kept that crazy house of cards from falling for so long.

If NBC really wants "The Event" to be its big hit of the season, it should ditch its expensive marketing plans in favor of calling in some heavy hitters to spice up these characters and make the central plot far more compelling. Because as long as the characters aren't interesting and the story looks destined to go nowhere (fast!), then "The Event" will hardly rise to the level of either "Fantasy Island" or "The Love Boat," let alone touch "Lost." Instead, it might as well be just another episode of "CHiPs." "Look, honey, here comes the part where the Pinto careens across three lanes of traffic and causes a 15-car pileup." A fascination with the supernatural may have replaced a fascination with superhighways, but the wreckage remains the same.