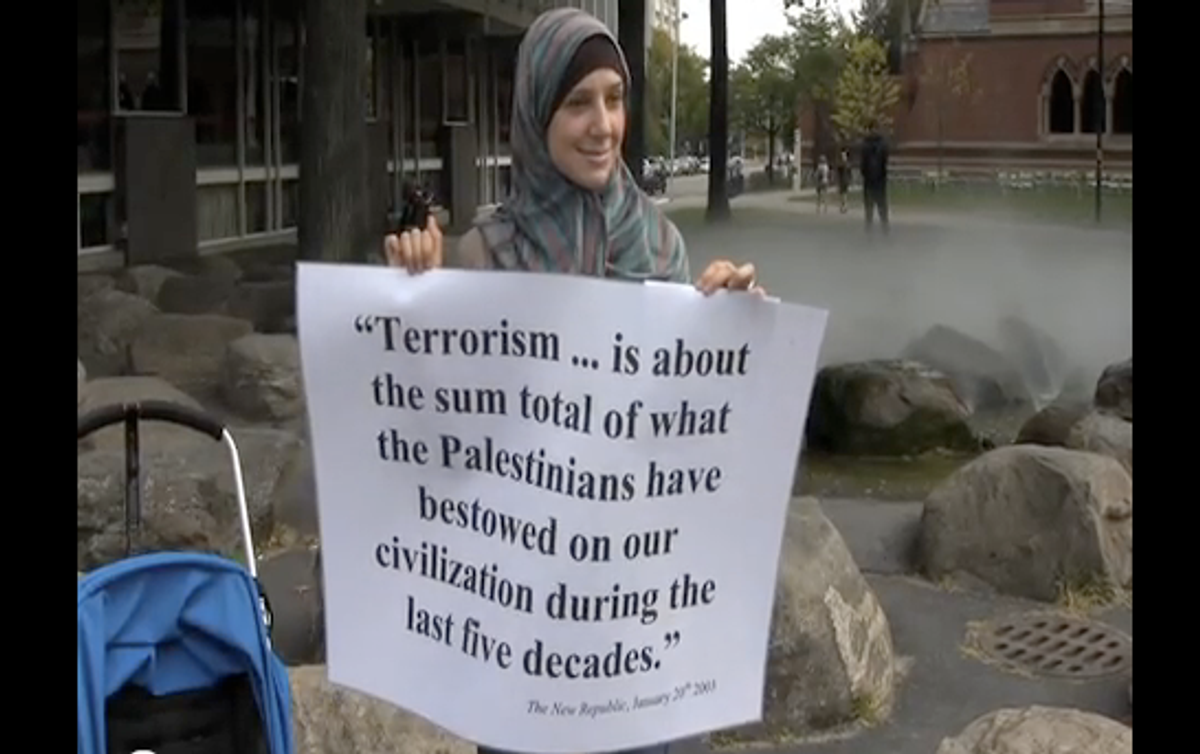 At an event on Saturday in Cambridge, Harvard University accepted a new research fund in honor of New Republic editor-in-chief and former Harvard teacher Marty Peretz (full back story here).

A sizable group of students upset by Peretz's writings over the years -- most recently his assertion that Muslim life is cheap and that followers of Islam should not be protected by the First Amendment, for which he later partially apologized -- was on hand to protest Peretz and the university.

Usefully, the protesters carried signs quoting Peretz's own words as they followed him and his entourage through Harvard Yard.

Here is the must-see video of the protest:

Here is James Fallows' take on why what happened today was an acceptable outcome.

And here is the press release put out by the protest organizers:

CAMBRIDGE, Sept. 25—Over 100 members of the Harvard community and others "welcomed" New Republic editor and the university administration's favorite racist, Martin Peretz, at the 50th anniversary of Harvard's Social Studies program with a combination of protests, walk-outs, and probing questions.

Demonstrators at the event confronted Peretz outside Harvard's Science Center—which was held in part to launch a $650,000 research fund in his name—and followed him for several minutes while chanting slogans rejecting his racist stances.

"Just because President Faust wants to honor a longtime public bigot doesn't mean that the Harvard community does," said senior Abdelnasser Rashid, a social studies concentrator. "We've billed this demonstration as a 'Party for Marty' to show how absurd Harvard's decision to celebrate Peretz is."

Peretz attempted to sneak out of the Science Center's back entrance around noontime but was quickly spotted and surrounded by Harvard students chanting "Harvard University will not stand bigotry" and "Harvard Harvard shame on you, for honoring a racist fool" as he walked aross campus.

The protest continued outside of the Adams House dining hall, where Peretz was honored at a Social Studies luncheon. During his talk, around 10 faculty and staff walked out in protest.

"It's Marty's party and he can cry if he wants to," said Maryam Monalisa Gharavi, a graduate student in comparative literature. "But the rest of us are here to remind him that we're not going to stand by while the Harvard administration overlooks his 25-year career in spewing hatred and bigotry. He has a right to free speech, not a right to be honored."

Protesters had gathered in the morning outside the Science Center, brandishing signs with some of Peretz' most memorable quotes from his long career of spouting racism. Peretz has described "Arab society" as "hidebound and backward"; declared that "many in the black population are afflicted by cultural deficiencies"; and described Latin American societies as "congenitally corrupt" with "near-tropical work habits."

Peretz was roundly criticized during the Social Studies celebration itself. During the event's morning panel, Berkeley economist Brad DeLong cited Peretz's recent statements about Muslims and argued that the only "appropriate response" was "What the frackity frack is going on here?"

During the afternoon panel, several Social Studies alumni and current students challenged Washington Post columnist E.J. Dionne, former deputy attorney general Jamie Gorelick and Princeton professor Michael Walzer over their support for the Peretz Fund during a question and answer period. Students remarked on the irony of the session's title, "Social Studies and Social change," and asked the panelists how they managed to overlook a career of bigotry spanning decades.

The demonstrators joined the over 600 people, nearly all Harvard affiliates or alumni, who signed an open letter this week calling upon Harvard to reverse its decision to honor Peretz and establish a fund in his name. Separately, several Harvard student groups representing Arab, African-American, Muslim, and Latino students jointly signed letters condemning the decision to honor Peretz.

Harvard administrators have cited Peretz' recent attempt to apologize for a few of his most recent remarks after they drew nationwide condemnation; but these half-hearted and belated remarks do not address the many racist statements he has made over the past few decades.

"The Harvard administration has no right to accept to absolve Martin Peretz of his racism on behalf of students of color and others who oppose racism," Rashid said.