Say it ain't so, Joe

Vice President Biden knows better than to tell the Democratic base to "stop whining." Doesn't he? 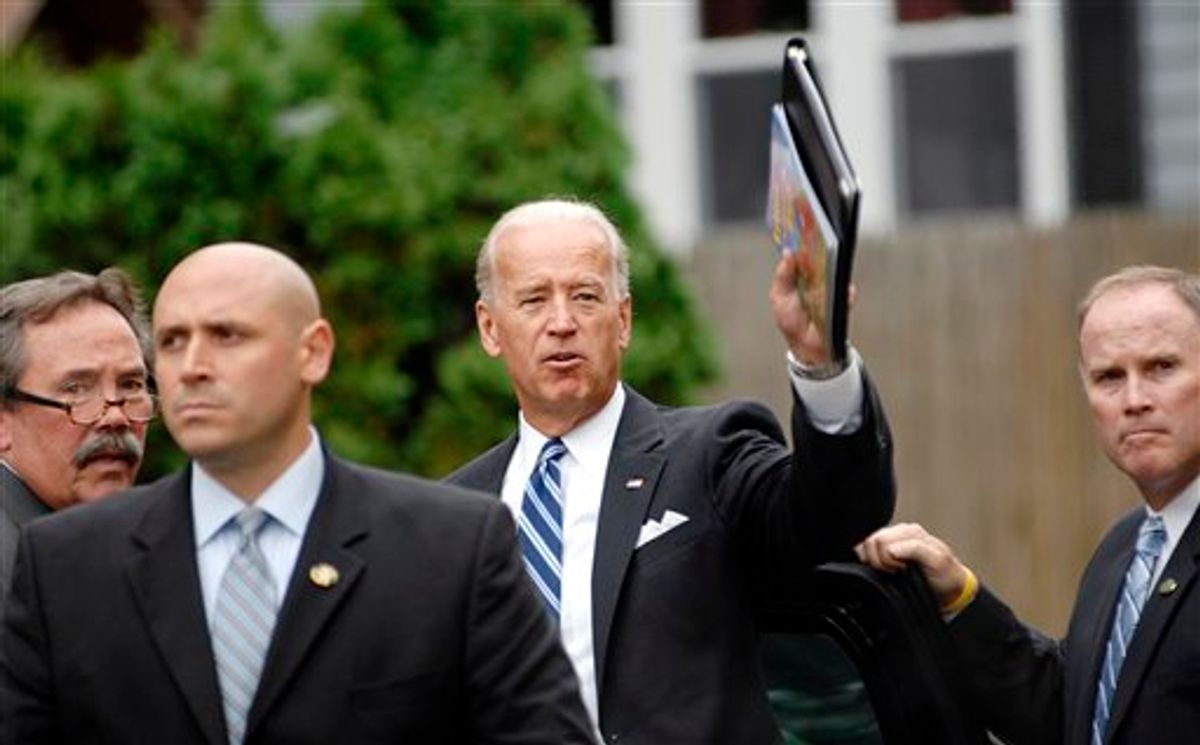 It's been clear for a couple of weeks that Vice President Joe Biden was hitting the campaign trail with an assignment to rally the Democratic base. I watched his sit-down with Rachel Maddow Sept. 15, and he made a passionate appeal to the Maddow demographic, and Maddow herself. "One of the reasons I want to be on your show is to tell the progressives out there, you know, get in gear, man. Our progressive base…you should not stay home…you better get energized. Because the consequences are serious for the outcome of the things we care most about."

On Monday though, Biden went a little beyond that, telling a crowd in New Hampshire that he wanted to "remind our base constituency to stop whining and get out there and look at the alternatives. This President has done an incredible job. He’s kept his promises."

Now, I'm trying hard not to have a knee-jerk response to Biden's dig. After attacks on the "professional left" and the "fucking retarded" progressives trying to run primary campaigns against Blue Dogs, and Obama's own plea last week to "griping and groaning Democrats… Folks wake up! This is not some academic exercise. As Joe Biden put it, Don’t compare us to the Almighty, compare us to the alternative" – well, I understand that the administration isn't happy with the criticism from the base. I even sympathize with some of the frustration. It's true that the healthcare and financial reform bills were the most ambitious, far-reaching social legislation since the Great Society. You add in the $787 billion stimulus package, and it seems like a trifecta of social change that should have progressives ecstatic – especially when you consider that the right considers all of that legislation proof that Obama is a socialist.

Of course the problem is that all three of those accomplishments were the product of ugly, maybe even uglier-than-usual compromise, the first two with financial and insurance titans who caused the problems the bills were supposed to solve. The third, the stimulus, was crafted to win over Republicans, which made it a much less effective package than it needed to be – and then they still overwhelmingly voted against it. We are living with the inadequacy of the stimulus every day, politically and economically, as stubborn unemployment and financial insecurity make this a tougher election cycle for Democrats.

But that's the past. Even though I know a lot of cranky progressives – even though I am one, some of the time -- I don't know anyone personally who's saying, "I'm not voting, and you shouldn't either!"  There may be folks who feel they can't support conservative Democrats who are repudiating Obama and healthcare reform and supporting tax cuts for the wealthiest Americans, despite overwhelming polling showing Americans oppose those cuts. But that's a minority of progressives; I'm not sure why the administration seems to think it's helpful to trash all of us. Are their polls saying that insulting the base helps with independents? Is there a Democratic Frank Luntz with research showing progressives are masochists who actually enjoy being punished? And do you see Republicans trashing their Tea Party base, whose extremism makes progressives's ideas look like centrism?

Maybe Biden will come out tomorrow and say his "stop whining" order was another one of his loveable gaffes, and apologize. But probably not. Every administration insult to the base has been followed not by an apology, but by a doubling down on the criticism. I am on record chiding the left for being unrealistic about expectations and failing to realize that changing the country is more than a two-to-four year endeavor. But the administration's persistent impulse to insult the most loyal Democrats suggests they don't know how to organize for the long haul, either. Biden has to know that inspiring voters works better than scolding them. Let's hope he remembers that in the days to come.