The HBO show heats up as Jimmy tangles with Nucky, and has one strange reunion with his half-clothed mother 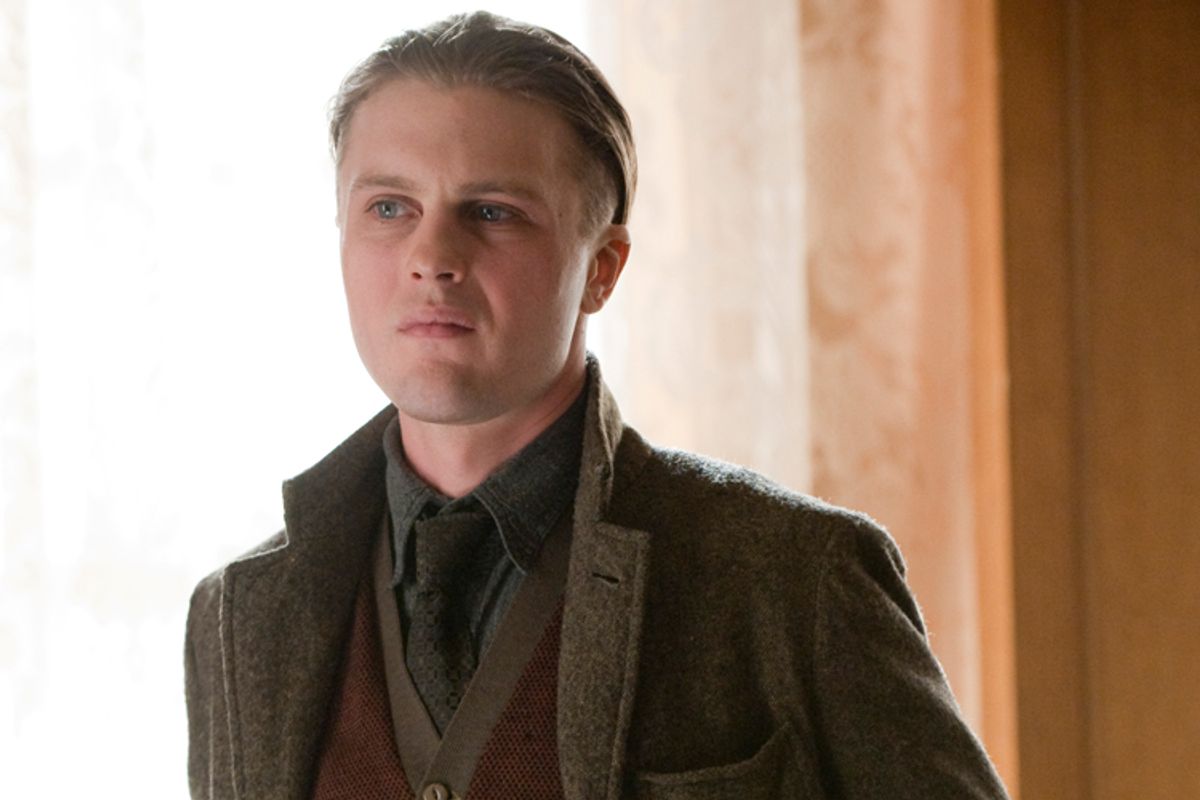 Last week's premiere opened with a bang — or at least a man getting decked with the wrong end of a shotgun — but this week, we begin with the tolling of church bells, setting the stage for an episode in which the chickens come home to roost. Big Jim Colosimo is dead, laid to rest in Chicago, while back in Atlantic City, agent Van Alden begins to poke around the ostensible solved murder of four — or is it five? — men by Jimmy and Al Capone. The ambiguity over just how many stiffs Jimmy and Al left in the woods outside Hammonton, the Blueberry Capital of the World, is neatly slipped into a confrontation between Jimmy and Nucky, which makes it clear Jimmy has no idea how much trouble he's gotten his erstwhile mentor into.

Jimmy tries to "clock in" as if nothing has happened, but Nucky angrily rebukes him; their business and personal relationships have been ended in one fell swoop. It doesn't help that, in spite of Nucky's attempt to pin the blame on Margaret Schroeder's late and unlamented husband, Van Alden has come knocking on Nucky's door, or that Arnold Rothstein, "Boardwalk Empire's" most chilling and cold-blooded villain, blames him as well, to the tune of demanding $100,000 in reparations. (Incidentally, I wonder how many people have watched thus far and have yet to connect Michael Stuhlbarg's gelid sociopath with the beleaguered college professor of "A Serious Man." The performances are polar opposites, but each equally convincing.) But it's clear that what angers Nucky most is the personal betrayal. We learn more about Jimmy's background this episode (more on that in a second), namely that he was either raised without a father or wishes he had been, and since he said last week that he'd been currying Nucky's favor "since the age of 12," it's likely he served as Jimmy's surrogate dad, which makes the wound even deeper. Nucky cuts Jimmy off at the knees, simultaneously terminating his employment and informing him that he owes Nucky $3,000, to offset the trouble he's caused. When Jimmy finally manages to scrape it together, Nucky takes the payment and immediately slaps it down on the roulette table, shrugging off the inevitable loss as if it's nothing — which of course, to him, it is. It's a naked display of superior power, a keen humiliation Jimmy will be nursing for some time.

You have to wonder, though, if Nucky knows who he's dealing with. As Jimmy tells anyone who will listen, fighting in the first World War changed him. Nucky may crack wise about the brutality of "Huns," but Jimmy has seen it firsthand. When he tells Nucky he and Al had no choice but to kill the men in the woods, it's in the "but mom ..." tones of a chastised teenager. Remorse doesn't enter into it, even with Nucky. "I said I was sorry," Jimmy whines. "Oh really?" Nucky shoots back. "When was that?"

We're only two episodes in, but it's worth noting that so far the writers (or rather creator Terence Winter, who's credited with both scripts) has put more effort into defining Jimmy than the show's ostensible protagonist. We know so far that Nucky's not to be trifled with, that he's a charmer when he needs to be, as when he boosts a visiting cutlery supplier's chances of scoring with a young chippie by fibbing that her date will be a judge in the city's upcoming beauty pageant. (The Miss America pageant began the following year.) But apart from the shots of him mooning over his dead wife's picture — and yes, that is "Deadwood" actress Molly Parker, whom we can no doubt count on showing up in a flashback somewhere down the road — we've got precious little idea what makes Nucky tick.

Compare Nucky's relative blank slate with Jimmy's back-to-back scenes this week. In the first, he and his wife are in bed and getting amorous, as their son sleeps in the corner. She tells him it's "not a good time" for sex, so he suggests that they do it "the French way," which means her going down on him. Jimmy's suggestion that this particular sex act is something he's only heard his fellow doughboys discuss probably strains credulity, but the way Pitt plays it, you at least half-believe it. He is, by his own token, a murderer, but he's also still a child.

A little fellatio has nothing on the perversion of the following scene, where we're introduced to Jimmy's mother, Gillian (Gretchen Mol). We first see her in rehearsal for a titillating revue, in a mesh bodysuit with her breasts barely covered by spangles. (The subject is Odysseus, and she is one of the sirens who nearly lured him to his doom. But that probably won't be significant.) When she sees Jimmy in the dressing room, she jumps into his arms and wraps her legs around his torso, smothering him with kisses and calling him "my baby" in a manner that deliberately evokes the passion of long-separated lovers rather than a semi-estranged mother and son. Assuming that we've not just been misled for the sake of a cheap gag, the incestuous subtext is so blatant that the writers will have to work hard to pay it off in future episodes.

Most of the rest of what happens this week still has the feel of pieces being moved into place. The enmity between Nucky and Rothstein deepens; Capone beats (and probably kills) a reporter asking questions about Big Jim's murder; Nucky's brother Eli warns Margaret Schroeder to protest less loudly about her husband's innocence, and offers her a payoff to smooth things over; and Van Alden tells his boss he thinks Nucky is a "bigger fish" than Arnold Rothstein. Oh, and that missing fifth body? He turns up in the woods, very much alive, and interrupts the long-delayed tryst between the cutlery salesman and his grudging mistress. Here again, the symbolism seems awfully thick; the sex-and-death juxtaposition is the stuff of sophomore theater workshops. But at least this time it's played for laughs, with the salesman's moans and his partner's grunts turning to frightened screams to match those of the half-dead man in front of them.

Sam Adams writes for the Los Angeles Times, the Philadelphia Inquirer, the Onion A.V. Club and the Philadelphia City Paper. Follow him on Twitter at SamuelAAdams or at his blog, Breaking the Line.