The New York Times misses the mark on Linda McMahon

An exhaustive magazine piece attempts to explain her rise, but presents some curious history instead 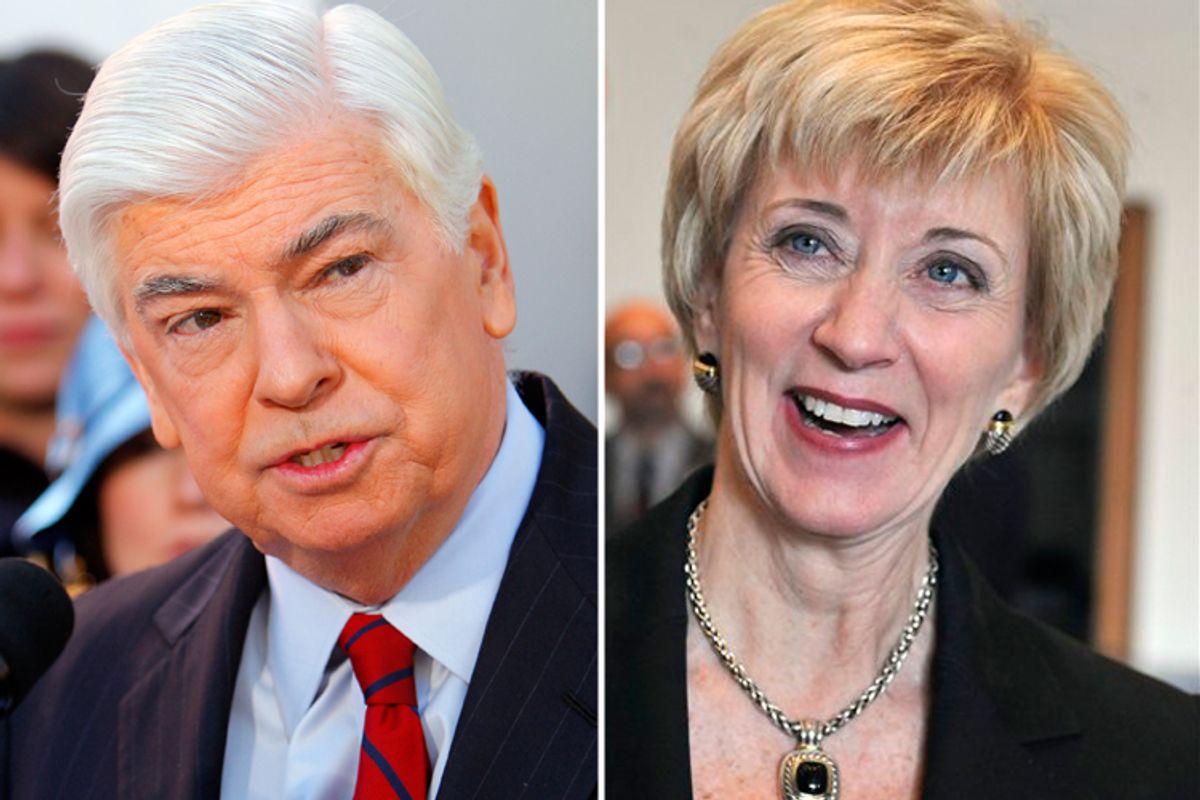 The rise of Linda McMahon, the wrestling executive who is pumping tens of millions of dollars into her own Republican Senate campaign in Connecticut, is certainly a fascinating story. McMahon has pulled within striking distance of Democrat Richard Blumenthal in recent polling, and the idea that she'll win in November -- and possibly deliver the Senate to the GOP in the process -- is no longer laughable.

But the New York Times magazine sure has a funny way of looking at the race. The premise of Matt Bai's exhaustive piece in Sunday's issue is that McMahon is succeeding in part because of the decline of powerful party institutions. There is, obviously, something to this, in the sense that party machines everywhere aren't what they used to be.

But Bai suggests that the unwillingness of state Democratic leaders to coax the scandalized Sen. Chris Dodd into seeking another term this year is a sign of that decline, and that in the day of John Bailey, the long-departed state party boss, there would have been a full-court press to get :

Specifically, [Democratic pol Paul] Timpanelli was talking about how state Democrats failed to rally behind Dodd earlier this year — how they seemingly did not know how to offer an endangered incumbent, a man who served for 30 years in the Senate and became a giant of state politics, any incentive to seek re-election.

“John Bailey would have offered him the world, and he would have given the world,” Timpanelli told me. When I mentioned this to Dodd, he agreed. “The party apparatus didn’t seem to be there or know how to handle this,” he said, speaking of the erosion in his standing.

This is just way off the mark. It's actually no surprise at all that Democrats didn't beg Dodd to run this year: His poll numbers were poisonous and he was a sure loser whose presence on the fall ballot would have threatened down-ballot Democratic candidates (the ones whose success is essential to the functioning of whatever is left of the machine). Just like New Jersey's Democratic machine wanted then-Sen. Robert Torricelli off of its line in 2002, Connecticut Democrats had every reason to hope and pray that Dodd would back out -- and to rejoice when he did.

More remarkable, though, is that Bai doesn't seem to realize that Bailey actually faced a nearly identical scenario when he ran the state party 40 years ago. Back then, the embattled and scandalized incumbent was also named Dodd -- Thomas Dodd, the father of Chris, who had just been censured by the Senate for using campaign funds for personal expenses. Heading into the '70 campaign, Thomas Dodd represented the same electoral liability to his party that Chris Dodd did entering this year's race. And did Bailey offer Dodd the world to run? Of course not. He worked to stop him, ultimately prompting Dodd to leave the party rather than face a humiliating defeat at the state convention or in the primary. Instead, Dodd waged a futile third party effort, one that is most notable for draining just enough votes from Joseph Duffey, his replacement as the Democratic nominee, to elect a Republican congressman named Lowell Weicker.

If anything, today's Democratic leaders handled the situation better than Bailey did because they took  pains not to antagonize Chris Dodd. And even though Blumenthal is in danger of losing, he's still a far stronger candidate than Dodd would have been: long-term incumbent senators with the toxic poll numbers that Dodd enjoyed just don't win reelection, particularly in years like 2010. To the extent it eased Dodd out of the race, then, the Democratic machine actually made McMahon's campaign more difficult, not less so.

Moreover, her rise is hardly unprecedented. It was 20 years ago that Weicker won the governorship as an independent, his victory keyed by defections from traditional Democratic voters. In that race, the Democratic nominee, then-Rep. Bruce Morrison, finished with just 20 percent of the vote, despite strong establishment support. Given that experience, it's hardly shocking that in an anti-Democratic climate like this year's, a fantastically wealthy businesswoman could spend her way into contention while running on the Republican line.

Bai's piece also seems to treat McMahon as a poor cultural fit with the state's "patrician" Republicans. But again, the GOP embraced a decidedly blue-collar, non-country club candidate 20 years ago in John Rowland, who lost the '90 race to Weicker by two points (and then won the seat four years later, though with a smaller share of the vote). Rowland was a product of Waterbury, a hard luck city with a deep culturally conservative streak -- hardly a fit with the Fair field County bluebloods.

The real story of McMahon's surge is pretty easy to understand: She's spending a ton of money, she caught a break when Blumenthal's Vietnam exaggerations were revealed, and she's running in a year when the Republican Party exists to swing voters almost exclusively as a protest vehicle. If this same race had been held in 2008, she'd be hopelessly behind and no one outside the state would be saying much about it. Her success doesn't really say anything about the decline of party machines or the demographic evolution of Connecticut. It's simply another illustration of how toxic the political climate is for Democrats in 2010.