From accused murderer to member of Congress? 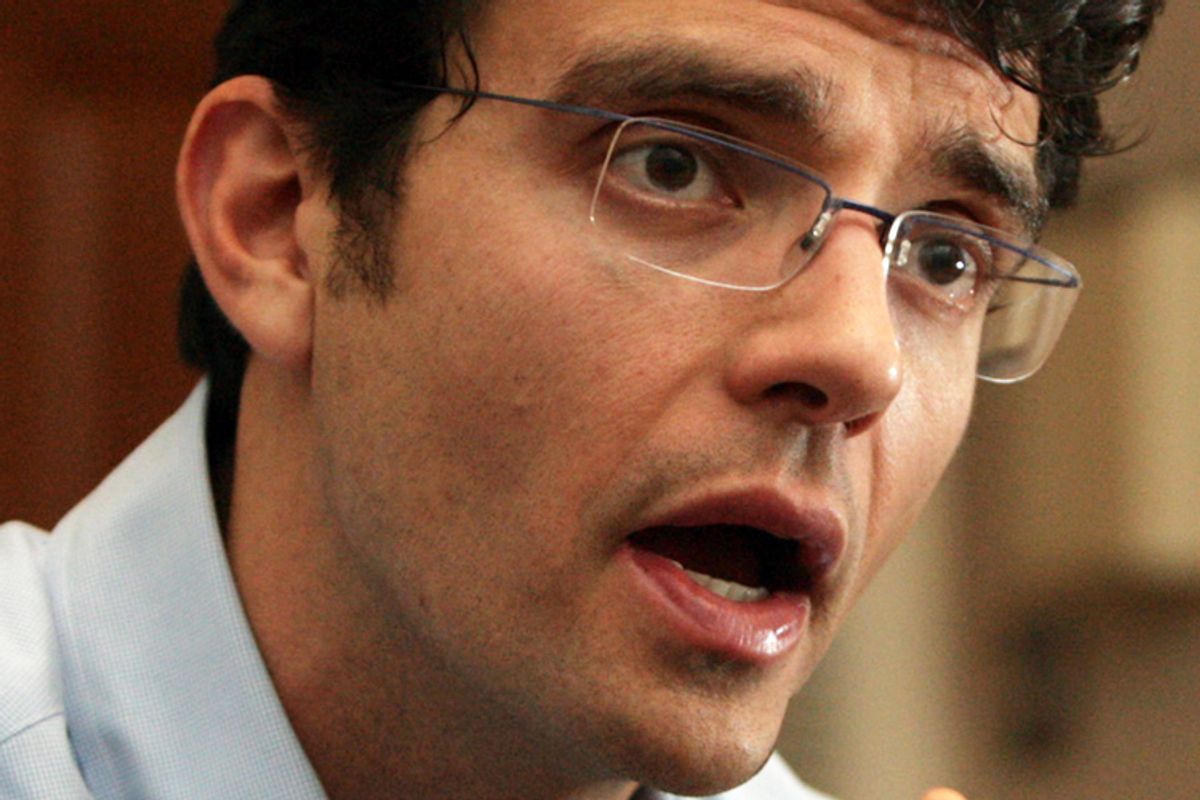 In a race that has largely been flying under the national radar, a former Marine who killed two unarmed Iraqi prisoners in 2004 and who has made the threat of Islam and the "ground zero mosque" centerpieces of his campaign has a real shot at being elected to Congress.

Republican Ilario Pantano, 39, is taking on incumbent Mike McIntyre, a seven-term conservative Democrat, in North Carolina's 7th District, which takes in the state's southeast corner. If Pantano wins, he would surely be one of the most compelling -- and right-wing -- members of Congress. He told Salon in an interview Friday, for example, that he welcomes the endorsement of the far-right blogger and anti-Islam activist Pamela Geller.

Though there haven't been recent polls on the race, two local political analysts told Salon that Pantano has a real shot, and the National Republican Congressional Committee recently started buying ads in the race after naming Pantano one of its top-tier "Young Guns." While McIntyre has represented it since 1997, the 7th District actually voted for John McCain by 5 points in 2008.

Pantano's biography has made him an irresistible subject for newspaper and magazine profiles even before this campaign (see, for example, this New York magazine cover story) and would almost certainly make him a darling of the neoconservative wing of the GOP if he is elected.

Pantano, who describes himself as a "born-again Christian and a born-again Southerner," grew up in Manhattan, where he went to a fancy private high school on scholarship and then on to the Marines during the first Gulf War. When he got back, he went to NYU and worked as a trader at Goldman Sachs for a few years before becoming a consultant. He was in the city on Sept. 11, and that's when he decided to rejoin the Marines. He was sent to Iraq.

It was there that, in a disputed April 2004 incident south of Baghdad, Pantano killed two unarmed Iraqi prisoners, Hamaady Kareem and Tahah Ahmead Hanjil. The incident occurred after the two men had been arrested as suspected insurgents and Pantano directed them to search their own car. According to Pantano's version of events, the men moved toward him in a threatening way and he opened fire in self-defense, shooting up to 60 rounds and killing both of them. He then put a sign next to the bodies with a Marine slogan: "No better friend, no worse enemy." Pantano told New York magazine: "I believed that by firing the number of rounds that I did, I was sending a message" to other potential insurgents.

In 2005, Pantano was formally accused of premeditated murder, partly on the strength of testimony of other Marines present during the incident who believed it was not justified. But after a series of hearings, the military brass agreed with Pantano's version of events and he was cleared of the murder charges.

By that time, Pantano's ordeal had became a cause célèbre among conservative media like the Washington Times, which reported on the ins and outs of the trial. His cause was championed by talk radio host Michael Savage and others who felt the U.S. military had no business prosecuting one of its own over the killings of Iraqis. Capitalizing on that publicity, Pantano wrote with a co-author a book on his experiences, "Warlord: No Better Friend, No Worse Enemy." On the ensuing book tour, he charmed many of his interviewers, including Jon Stewart.

Pantano took some criticism last week for editing a reference to the killings out of news clips he was using in a campaign ad. But one of the remarkable things about the campaign in North Carolina this year is that the murder charges are not only not an issue, but have barely even been talked about.

David McLennan, a political scientist at North Carolina's Peace College, told Salon that the issue could backfire for McIntyre, the Democratic incumbent, particularly in a district with a large ex-military population.

"There are some people in the district who consider Pantano to be a hero. For McIntyre to raise that issue is just way too delicate," McLennan says.

Some of the only criticism of Pantano's past has ironically come from the man he beat in the GOP primary, fellow Iraq war vet Will Breazeale. He told the Daily Beast after his primary loss that he considers Pantano "dangerous," adding: "I’ve taken prisoners in Iraq and there’s no excuse for what he did."

Asked by Salon if he is surprised that his critics have largely ignored the Iraq incident, Pantano was defiant. "If they want to question my war effort -- if they think that's prudent, they can go ahead ... I've served my country proudly in two wars."

His campaign has focused to an unusual extent on opposing the Park51 Islamic community center project in New York, which he refers to as a "Martyr Marker" that's really about "territorial conquest."

"If they think that the threat of inflaming the Muslim street is enough for Americans to back down, they're deluding themselves," he said. "We have our own street to worry about being inflamed."

Or as he wrote in a Daily Caller Op-Ed over the summer that connected the mosque organizers to the threat from Iran and the Gaza flotilla:

If Mosques go up like mushrooms everywhere there is a bombing or a shooting we will create a perverse incentive, not a deterrent. This mosque at Ground Zero will serve as a big Trojan trophy; and we are welcoming it?

This kind of rhetoric has attracted the enthusiastic support of Pamela Geller, the blogger who leads a group called Stop the Islamization of America and who played a key role in creating the "ground zero mosque" controversy. Most candidates might tread carefully when dealing with a Geller (among the conspiracies she subscribes to is a theory that Malcolm X is President Obama's real father).

He said he had no qualms about speaking at an anti-mosque rally on Sept. 11 near ground zero earlier this month with Geller and other controversial figures like Geert Wilders, a Dutch parliamentarian who advocates restricting civil liberties for Muslims.

Says Pantano of the mosque issue and his campaign: "I see this as a war for the heart of our country."

Here he is speaking at ground zero, introduced by Geller: