As major disasters loom around every corner, characters run for cover -- at the cost of their souls 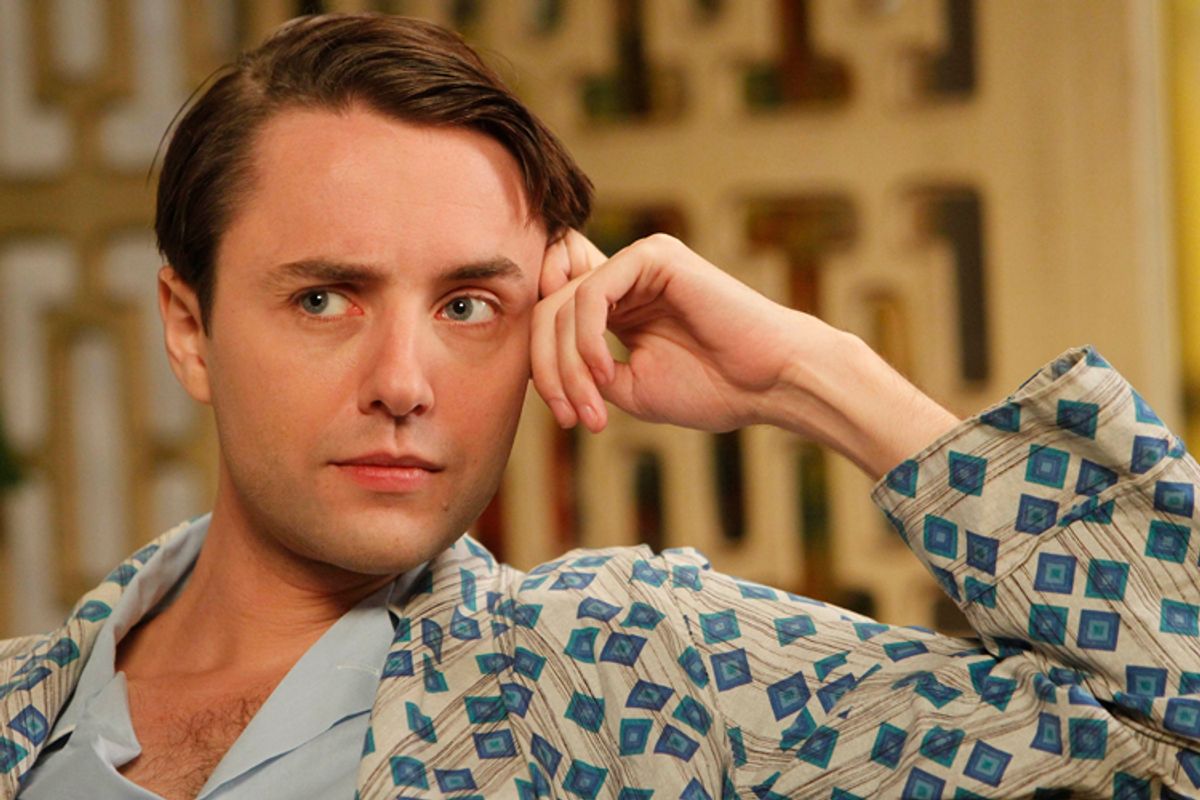 "No hard feelings." "Life goes on." "These things happen." "We avoided a tragedy." These are the lies people tell each other when everything falls apart, lies that depend on the common American notion that whatever catastrophe has befallen us, it's all for the best. As Don, Lane, Roger, Joan and Pete all face crises in Sunday night's "Mad Men," the thread running between them isn't a possibility of new growth and enlightenment (as we've seen in previous episodes in this fourth season), but the impossibility of just those things. Although these characters struggle to follow their most heartfelt desires to a more satisfying life, they're each petrified of the consequences of leaving their old ways behind. Roger professes his love for Joan but makes it clear that having their kid would only screw up his life and his romantic notions about her. Don comes clean to Faye and is supported by her, but even as they reach a new level of intimacy that's healthier than anything he's experienced so far, he's already halfway out the door. Lane makes awkward attempts to start a whole new life, but ultimately he's incapable of disobeying his father (and you would be, too, if your daddy struck you in the head with a cane every time you said the wrong thing).

While some romantic solutions might occur to us -- Roger should marry Joan and have her child, Don should go back to being Dick Whitman and settle down with Faye, Lane should divorce his wife and live happily ever after in America -- these men, like most of us, are too attached to the forces that oppress them to ever break free.

As "Hands and Knees" presents the challenges of living authentically and representing your truest self unapologetically, the central characters demonstrate that authenticity is often easily overshadowed by a driving compulsion to maintain the status quo. As disappointingly unwilling to take leaps of faith as these characters can be, week after week, the unique genius of "Mad Men" lies in its ability to dramatize conservatism, conformity, repression and regression in ways that make the act of refusing to take action feel like the most dramatic choice of all.

As always, Joan remains the paragon of keeping up appearances at the cost of her own happiness. It's incredible how, even when she's not letting down her guard, we know what Joan really wants, and we can see how far she is from getting it. Even with so many crises in the mix, Joan's scene with Roger at lunch may be the most devastating of them all.

Roger: I hate his. I wouldn't change anything. But I hate that it happened.

Roger: Don't you feel the same way? I haven't stopped thinking about you. Maybe I'm in love with you.

Joan: So you want to keep it?

Roger: No, of course not. It's just … if there's gonna be something between us, I don't want it to start this way. Do you? With a scandal?

Roger: I guess you could keep it -- it wouldn't be my child, let's make that clear.

Here we are, back to Roger the child and Joan the adult. Even as she refuses to show her cards ("I understand," "I see"), she gives Roger an opportunity to surprise her. Naturally, though, all he cares about is not messing up whatever sordid affair or "something between us" he happens to want at that moment. It's hard not to pity Roger, seeing how completely blind he is to himself. He has no idea that the words "Maybe I'm in love with you" are utterly undermined, to a woman, by the words "It wouldn't be my child, let's make that clear." When he says, "I hate this," all he means is that he hates that his chances at a fiery affair have been blown out of the water.

As sad as it is to see Roger sputtering through life like a confused infant, it's even sadder to witness how cleanly and smoothly Joan eliminates tragic experiences from her story. After her initial panic, she becomes calm and distant and goes to the abortion doctor alone. Even when the woman in the waiting room says, "There's no one to talk to" and Joan agrees, Joan responds with a lie. The impossibility of her ever having a real friend outside of Greg and Roger has never been clearer. But Joan has her story and she's sticking to it. "We avoided a tragedy," she tells Roger, as if the pregnancy were just an obstacle in the road that they swerved to miss, as if the baby and the promise of something transcendent between them were just figments of their imagination. "You're so beautiful," Roger replies, entranced this time not by Joan's real self, but by her ability to cast all of her needs aside for the sake of her winning narrative.

Meanwhile, Don finally has a chance to throw his own winning narrative aside. After weeks of confronting his problems and evolving, he encounters a rare opportunity to escape his elaborate house of cards: the feds are investigating him, and his secretary Megan has submitted background information that includes obvious lies. Even though he's been a sour drunk for most of the season, we've never seen Don unravel as completely as he does when he discovers Megan's mistake (which, of course, she had no reason to know was a mistake). Then Don does what he's never done before: He puts himself before work. Instead of sallying forth with a knot in his gut, he retreats to his apartment with Faye and has a panic attack. He tries to shoo Faye away, but she tells him (in stark contrast to Betty), "I'm not going anywhere. I'm not leaving you like this." Even more surprisingly, Don doesn't start swilling liquor, and instead comes clean to Faye about his past, saying, "I'm tired of running." For Faye, who's more excited by the truth than anything else, this confession is far from a deal breaker, and may be the most romantic moment of their entire relationship. Even though Faye can play along with the straight world, wearing her fake wedding ring and murmuring the same professional dulcimer tones that Joan does as she leaves Don's office, beneath it all Faye is all about the truth and nothing but the truth.

But see how Don begins each encounter with Faye with the words "I really should've called, I apologize"? He's being held to a higher standard than ever, and it's bringing out an unfamiliar honesty (and discomfort) in him. Even though this is his big chance to be with someone who'll see him for who he really is and treat him as a friend and partner instead of a provider and Daddy figure, he's not completely up to the task. We can see the strain in his face in his scenes with Faye now, from the time she cried about not having children to the scene in "Hands and Knees" when she tells him, "We'll figure out what to do."

In contrast to Faye, who gives men who've wronged her the what-for (and tells them what they can go do in the ocean when they ask too much of her), Don's secretary Megan is as obedient and loyal as a lap dog. Even though she had no way of knowing that Don's personal information couldn't be revealed to the feds, she takes all of the blame like a naughty child, telling him, "Oh my god, I'm so embarrassed. You're right, you're absolutely right. If you want to fire me, I'd understand completely." This is the fumbling baby version of Joan's more deliberate, controlled, "I understand, I see," and it's the kind of talk that sets Don at ease and plays into his constructed, ego-driven view of himself. Even though Faye says they'll figure out what to do together, Don already knows what he's going to do, alone. Faye (mature, supportive woman) walks out, replaced by Megan (obsequious little girl) who says she "messed so many things up," then mentions that she has a date, the same way Don's former secretary Allison asked about taking a date to the Christmas party right before Don slept with her.

Apologetic childishness and fawning may be salve to the narcissist's soul, but Megan obviously embodies the impoverished future that lies ahead for Don if he simply refuses to evolve. When he gazes at her putting on lipstick in that last scene, she might as well be striking him over the head with a cane, then grinding his hand into the carpet with her high heel.

Even as we watch Don or the other characters of "Mad Men" take baby steps to a more fulfilling life, ultimately the hurdles are too daunting, and they're forced to face the future with passive resignation. ("We'll see," is how Don responds to Faye's impassioned call to action, to figure it out as a team.) By sidestepping "hard feelings," by averting their eyes from tragedy, by reducing catastrophes to "things" that just "happen," these sad souls block off every path to their own salvation. But without any hope of emancipation from such a passive, inauthentic existence, they reduce themselves to shadows, moving across the wall at night. Every chance to change the future is already in the past. "There's nothing you can do. Nothing you could do. That's just the way it is," Lee Garner Jr. of Lucky Strike tells Roger, and Roger replies, "We're dead, you know that? The question is when."