Leading from "the center" isn't the answer for Obama 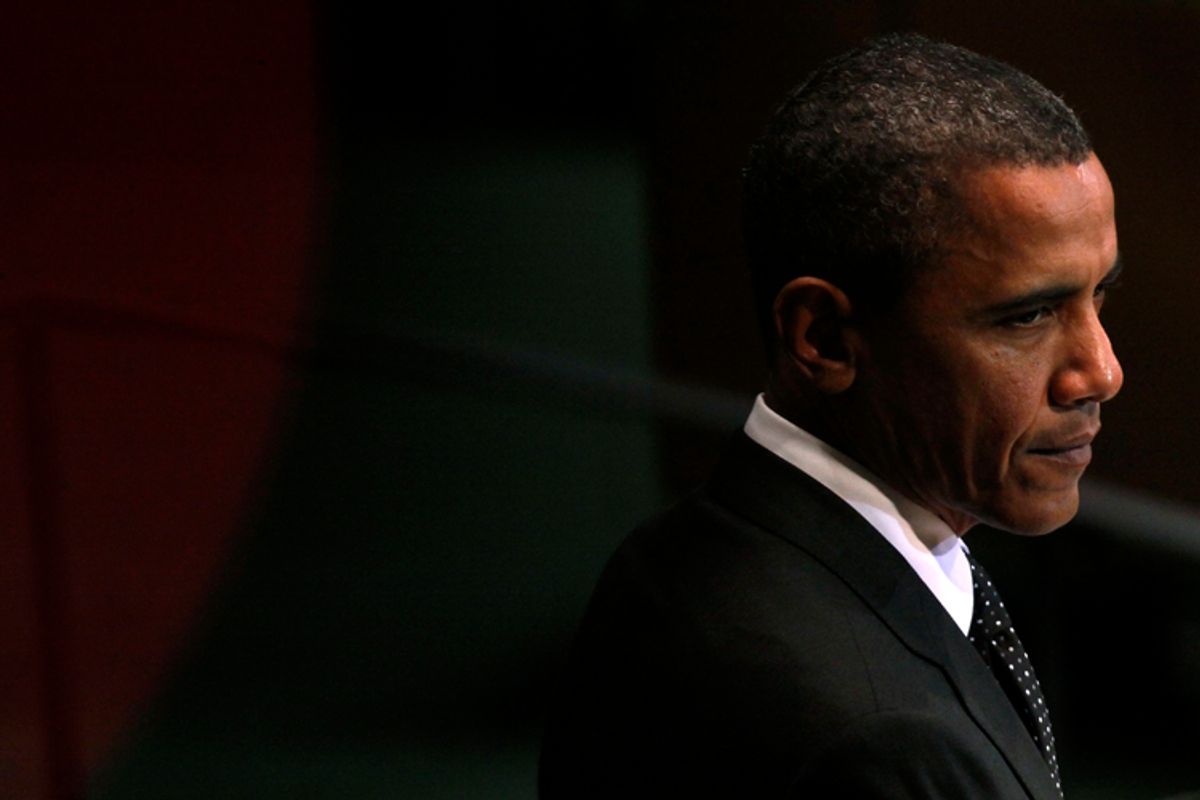 In the matter of Barack Obama's completely explainable and largely unremarkable poll numbers, we have yet another bogus theory: His policies are just about right, but his messaging just isn't moderate enough.

This one comes to us from Clive Crook, who writes in today's Financial Times that Obama's sin is one of salesmanship:

The key policies of Mr Obama’s presidency so far have been the fiscal stimulus and healthcare reform. Both were needed and to begin with voters were on board. The policies that emerged were less than perfect but vastly better than nothing. Yet voters have soured. The reason is not the substance of the policies, but how they were pitched.

In Crook's telling, the president's poll numbers (and, by extension, his party's midterm prospects) have dimmed because he's too often flirted with "leftist solutions" before giving in to the watering down demands of conservative Democrats. Had he simply started out in the middle, the voter revolt would be far more subdued.

This doesn't make much sense, though.

First, Crook seems oblivious to the basic nature of compromise. If you're a homeowner and you want to sell for $750,000, you start by asking for a million; if you're a president and you want a stimulus of $787 billion, you start by asking for a lot more. If Obama had opened the bidding on the stimulus and healthcare where both issues ended up, he would have settled for far less than what he got -- even though what he got, according to Crook, was just about right.

Plus, it's not like Obama was ever pushing for "leftist solutions" on either of these issues. Crooks notes that he initially backed a public option on healthcare, but that doesn't exactly put Obama in Bernie Sanders-land. In fact, a strong case can be made (and has been made) from the left that Obama started out much too close to the center on healthcare, ruling out a push for single payer before any negotiations began. The story is roughly the same on the stimulus: When negotiations began, there was lots of room to Obama's left, both in terms of the overall size of the package and the role that tax cuts would play in it.

But the biggest problem with Crook's analysis is simple: We already know why Obama is struggling in the polls, and why his party is on the verge of a bloody midterm -- and it has everything to do with the economy. While Obama's numbers have declined markedly since he took office, they are also exactly where you'd expect them to be in the face of near-10 percent joblessness and stalled growth. If he adopted a more "moderate" salesmanship strategy, whatever that means, he'd be doing no better. As much as he's struggling, there's nothing extraordinary about Obama's current political position.

Ironically, this points to one step that Obama actually could have taken as president to avoid -- or lessen -- his current woes: Insist on a bigger stimulus from the get-go. A stimulus twice as large as the one that was enacted last year would have meant lower unemployment and more growth today -- which would have meant higher approval ratings for Obama, and fewer House and Senate losses in November. Of course, this would have required him to do something that Crook considers a sacrilege and to position himself much farther on the left at the start of stimulus negotiations. But if Obama had done that and succeeded in scoring a bigger stimulus, it would have done far, far more for his party's prospects than the "lead from the center" advice Crook is peddling.

Granted, it's easy to say Obama should have pushed for a bigger stimulus. It's entirely possible that he actually did get the most he could have out of Congress in early 2009, something that can be blamed more on Senate centrists than the administration. Still, the fact is that a bigger stimulus would have helped Obama politically, and playing the role of reasonable moderate was no way to get one.