In GOP civil war, it's RINOs vs. EIPOs

The ideological purists have the upper hand today, but the long-term cost to Republicans could be substantial 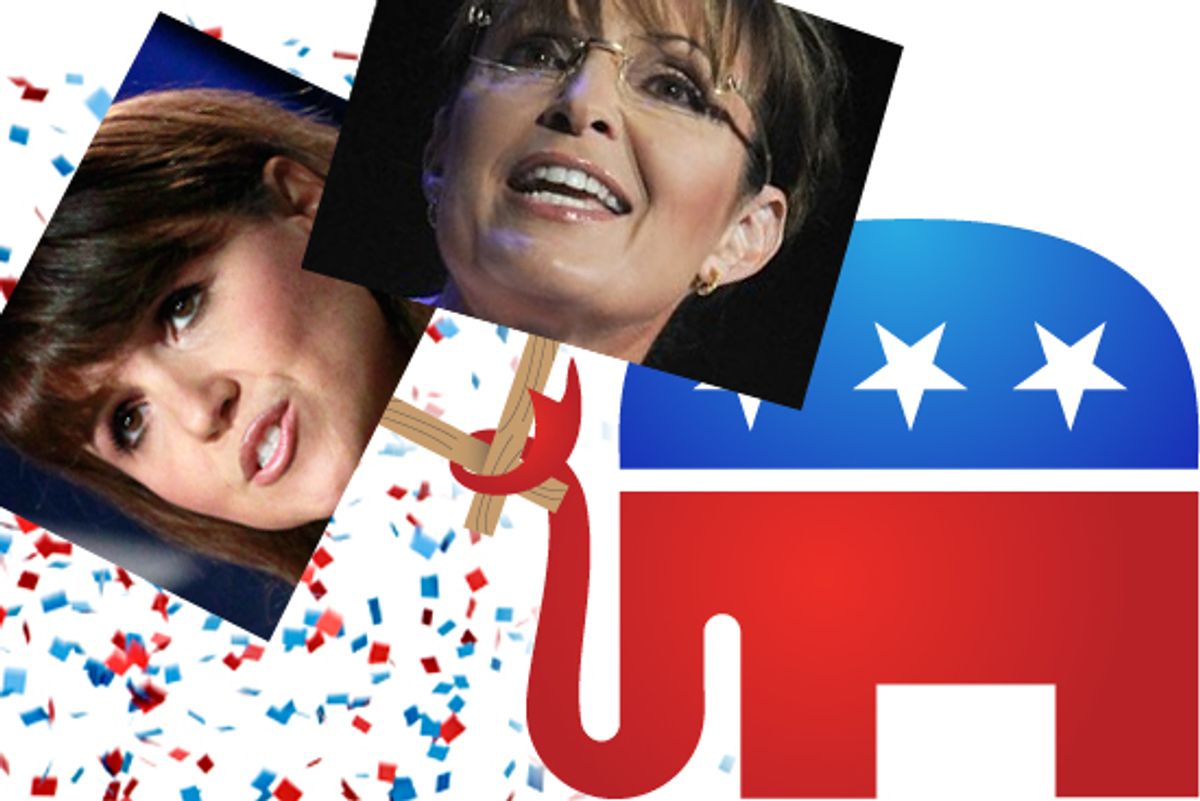 It sounds like something out of science fiction. A battle for the Planet GOP is currently underway, pitting the RINOs against the EIPOs. Cue Orson Welles.

As the RINOs appear headed for extinction, (political) scientists are left wondering if Planet GOP is itself doomed if its landscape is left only to the EIPOs.

The RINOs -- Republicans in name only -- evolved from the likes of H. John Heinz and John Chafee. Until recently, their ranks included Arlen Specter, Mike Castle and, well, me. They were registered in the Republican Party, but not because of a purely ideological connection. Consequently, they were vulnerable in primaries -- where the most passionate (usually conservative) voters determine the outcome. Now they're on the verge of being wiped out.

They can trace their lineage to an era when they were not so few in number. When Sen. Specter first arrived in the U.S. Senate in 1980, the Wednesday Lunch Club, a weekly meeting of moderate legislators, included: Mark Hatfield and Bob Packwood of Oregon, Bob Stafford of Vermont, Lowell Weicker of Connecticut, Bill Cohen of Maine, Warren Rudman of New Hampshire, Alan Simpson of Wyoming, Jack Danforth of Missouri, Charles Percy of Illinois, and Charles Mathias of Maryland.

Since then, however, natural selection has seen the elimination of RINOs in favor of EIPOs.

EIPOs -- electable in primaries only -- are a relatively new political species. Their ranks include Christine O'Donnell, Sarah Palin, Mike Huckabee and Newt Gingrich. They are rooted in the GOP for ideological reasons, and engender the support of the most passionate conservatives. Because of their ideological purity, they are eminently nominatable, but they are not electable come November.

Palin is the EIPO in chief. Nobody whips the right into a frenzy like Alaska’s former governor. She's a prolific fundraiser, a cash cow, and after a largely successful year of endorsing candidates across the country, a kingmaker. All of which puts her in a solid position to win the Republican presidential nomination in 2012, should she decide to run.

But beyond that, it's a brave new world. A recent 60 Minutes/Vanity Fair poll found that 59 percent of respondents don't think Palin is capable of being an effective commander in chief. Seven out of 10 moderates feel the same way. As do 63 percent of independents. In fact, just 41 percent of conservatives deem her capable -- compared to 40 percent who don’t.

O’Donnell, Palin's latest beneficiary, became an EIPO prodigy this month when she devoured RINO Mike Castle -- a former governor and Delaware institution -- by 6 points. But her victory also pushed Chris Coons, the Democratic nominee, from afterthought to outlier -- a Democrat poised to win in what is shaping up to be a Republican watershed year. A CNN/Time Magazine poll released on Wednesday found Coons leading O’Donnell by 16 points. Polling in the month leading up to the primary had Castle soundly defeating Coons in a hypothetical matchup.

The Delaware contest is shaping up much like last year's special election for New York's 23rd Congressional District. In that race, the district's various party elders selected longtime state Assemblywoman (and RINO) Dede Scozzafava to be the GOP standard-bearer after examining eight potential candidates in four district-wide forums.

Soon thereafter, Scozzafava came under fire from the right, and national conservatives parachuted in to support the more ideological EIPO Doug Hoffman as a third-party candidate. Palin endorsed Hoffman. Huckabee called Scozzafava's nomination a "train wreck." Rush Limbaugh called her a "liberal woman" and Michelle Malkin deemed her a "radical leftist." Days before the election, Scozzafava dropped out, and Bill Owens defeated Hoffman to become the first Democrat to represent the district in decades.

I asked Scozzafava soon thereafter if she recognized the woman that so many on the right had so willingly maligned. "Absolutely not," she told me. "I know who I am. I’m not sure where they received a lot of the misinformation that they have on me. But I voted with my Republican leader 95 percent of the time in the state Assembly. I think that's a pretty good percentage."

Apparently not good enough in the Age of the EIPO. Why? Because the war for Planet GOP is dictated by one evolutionary principle more than anything else.

It's survival of the fringes.

Sen. Specter, Rep. Castle, Assemblywoman Scozzafava and others have learned the hard way. In Arizona, John McCain -- less than two years removed from being his party's presidential standard-bearer -- was forced to tack so far to the right that he disavowed his "maverick" label. He was a RINO turned EIPO.

So jarring is the climate of conservatism during primary season that Mitt Romney has already been forced to distance himself from his signature achievement as governor of Massachusetts -- statewide healthcare reform. No doubt his EIPO rivals are salivating at the thought of running television ads featuring pictures of then-Gov. Romney alongside Ted Kennedy at the signing ceremony.

The irony (frustration is more like it) is that Romney is no EIPO. He should be the Republicans’ best hope in 2012. If central casting called looking for someone to play an American president, he would get the part. He has executive experience in both the private and public sectors and a command of economics that few, if any, Republicans on the national stage can rival.

Unfortunately, candidates on Planet GOP are mined for ideological purity. And the same set of ideals must reign from Alabama to Albany. No leeway. No divergence. No individuality. So the moderate former Massachusetts governor has tried morphing into a family values conservative.

That's what it takes to reach the constituency that votes in Republican primaries today -- a group increasingly unwilling to think critically about the candidates in front of them so long as what the candidate says passes the litmus test. Even if the rigors of that litmus test alienate the independents and moderate Democrats needed to actually win in November.

For now, the EIPOs have the edge. But Planet GOP cannot survive with EIPOs alone.

Michael Smerconish is a nationally syndicated radio host, a columnist for both the Philadelphia Daily News and the Philadelphia Inquirer, and an analyst on MSNBC. He is the author of five books, the most recent of which, "Instinct: The Man Who Stopped the 20th Hijacker," was released in September 2009.