America is losing the trade war 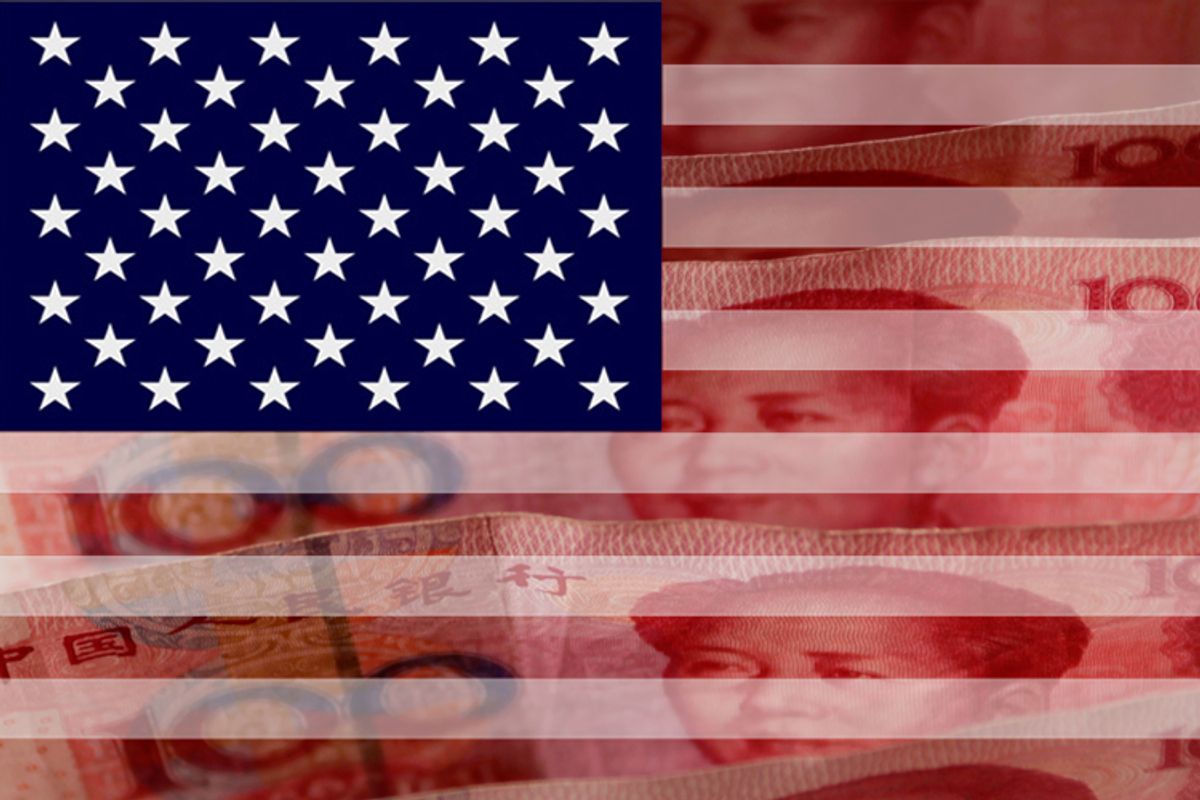 Is a U.S.-Chinese trade war brewing? Congress seems likely to vote on a bill condemning China’s practice of manipulating its currency to subsidize Chinese exports to America while imposing a virtual tariff on American exports to China. Meanwhile, in retaliation for the Obama administration’s decision to punish Chinese market manipulation by imposing tariffs on Chinese tires, the Chinese government has announced that it will impose tariffs on chicken exported to China from the U.S.

In the last decade, China replaced the European Union and Mexico as the largest exporter to the U.S. of computers, consumer electronics and other high-tech products. They want to sell us industrial goods, including high-tech manufactures. In return, they want us to supply them with cheap food like chicken. That is the classic policy of "mercantilism" -- the strategy of using trade as a weapon to maximize a nation’s industrial power relative to that of its rivals.

According to mercantilist theory, trade policy should serve domestic manufacturing. Duties should be low on the raw materials used in factories. Duties should also be low on cheap food imports from abroad that are used to feed factory workers. At the same time, there should be high tariffs or other barriers on imports of manufactured goods from rival countries. The purpose is to encourage other countries to specialize in raw material and agricultural exports. Their competition with each other will then drive down the prices for the inputs needed by the industrial nation, even as they allow the industrial country’s exports to monopolize their own consumer markets.

Britain successfully used sophisticated mercantilist policies to become the world’s leading manufacturing nation by the 1840s. At that point the British switched to free trade because they no longer feared foreign industrial competition. As Britain had done earlier, the U.S. followed a protectionist industrial policy from the 1870s to the 1930s. High tariffs kept British and other foreign manufactured goods out of the American market. At the same time, the U.S. government encouraged exports of metals, foodstuffs, and other commodities from Latin America and Asia, and kept the labor costs of American manufacturers low by importing low-wage workers to the industrial states from Europe and the American South. To keep wages low, American manufacturers also relied on the federal courts and the National Guard to crush organized labor. Like Britain, the protectionist U.S. practiced and preached free trade only when it feared no industrial rivals, thanks to the temporary devastation of Europe and Japan by World War II. Mercantilism is as American as domestically sourced apple pie.

A Japanese participant in U.S.-Japanese trade negotiations in 1955 named K. Otabe reminded the American delegation that "if the theory of international trade were pursued to its ultimate conclusions, the United States would specialize in the production of automobiles and Japan in the production of tuna ... such a division of labor does not take place ... because each government encourages and protects those industries which it believes important for reasons of national policy." Following the 1955 negotiations with Japan, the U.S. granted $37.2 million in trade concessions and received only $6.4 million from Japan. While Japan, following the classic mercantilist strategy used by 18th century Britain and the 19th century U.S., reduced its duties on raw materials and foodstuffs, the U.S. reduced its duties on Japanese manufactured imports like electrical products, apparel and glassware.

In recent decades, by using a variety of devices in addition to currency manipulation, the Japanese and Chinese governments have exploited one-way access to the American consumer market while keeping American products out of their markets. Here, too, they are simply doing to us what we did to the British empire a century ago. Between the 1840s and the 1920s, the British foolishly allowed the U.S. to sell in its domestic and colonial markets, even as the U.S. used tariffs to keep British goods out of American markets.

China’s version of mercantilism, however, is novel in some ways. The U.S., Germany and Japan became the world’s leading industrial nations by protecting their own markets for giant domestic corporations that could then expand abroad, like Ford, Daimler-Benz and Toyota. China is following a different strategy, by inviting Japanese, American and European multinationals to use it as a low-wage, low-regulation assembly and export platform. In particular, China is the center of a regional East Asian system of manufacturing for export. China and Hong Kong have had trade deficits with Japan, South Korea and Taiwan, even as they enjoyed a growing surplus with the U.S.

As soon as foreign multinationals have built up China’s manufacturing and R&D capability, China may thank them for their services, drive them out or buy them out and replace them with its own national champions, staffed by Chinese executives and employing Chinese workers. By that time, many of the executives of U.S. multinationals that have offshored jobs and production will be dead or retired and living off the huge bonuses they received for shutting down factories in the U.S. and building up the military-industrial base of China.

What should be done? We should begin by ignoring theoretical economists who treat all trade as mutually beneficial. The U.S. became the world’s leading economy between 1776 and the 1870s by ignoring 19th century free trade theory. We can remain at the summit longer if we ignore 19th century trade fallacies again.

We should also ignore those who minimize the role of foreign mercantilist trade practices in the loss of American manufacturing jobs. It is true that the industrial sector is shedding labor everywhere, but Asian mercantilism has accelerated that trend in the U.S. While manufacturing as a share of employment declined in all OECD countries from around a third in 1974 to an average of 18 percent in 2000, it has declined least in countries with export trade surpluses like Germany (24 percent) and most in countries running large merchandise trade deficits like the U.S., where manufacturing shrank to 11 percent by 2009. The decline of the U.S. employment share in manufacturing closely tracks America's huge trade deficits in the last decade, which peaked at 5.66 percent of GDP in 2006.

The members of the commentariat who claim that American protectionism is the greatest threat to the world economy are wrong. The greatest threat to a liberal trading system is the economic mercantilism of China, Japan and other East Asian countries. Unless North America, Europe and other regions are willing to play the semi-colonial roles of raw material and food suppliers assigned to them by the technocrats of Beijing and Tokyo, the U.S. and other liberal economies must abandon the policy of economic appeasement.

The solution is not an endless tit-for-tat trade war, in which we slap tariffs on Chinese tires and they retaliate against American chicken. The solution -- unpopular as it may be with the anonymous gnomes of the editorial pages -- is to abandon the idea of a rule-governed global market as a utopian fantasy. Market fundamentalism has never had much appeal beyond the North Atlantic trading nations like the Dutch, the British and the Americans. Not only China and Japan but also Germany are societies that lack the extreme individualism of the English-speaking world. They may liberalize their systems somewhat, but it is almost certain that there will continue to be a China Inc., a Japan Inc. and a Germany Inc. In time there may be an India Inc. and a Brazil Inc., as well.

Instead of hoping that other industrial societies will undergo a religious conversion to Anglo-American libertarianism, we should scrap a rule-based global trading system for a result-based global trading system. That means treating the world economy as a mix of free trade in some areas and various kinds of managed trade in industries that every major country wants to have -- computers, biotech, aerospace, automobiles. Trade in strategic industries should be treated the same as armaments. All arms negotiations begin by accepting that it is legitimate for countries to want to have their own armies, navies and defense industrial capabilities. We need to apply the same logic to strategic civilian industries. In some cases this may mean negotiating market shares in industries that every leading country insists upon having, in the same way that levels of armament are negotiated among military rivals. The right of every sovereign country, rich and poor, to its own national industrial development policy should be recognized. A useful, realistic global trading system would reinforce, rather than undermine, that right. The alternative to trade war is peaceful coexistence.

There is nothing wrong with the U.S. exporting energy, raw materials and agricultural products to other nations -- as long as the U.S. also exports high value-added manufactured goods. And there is nothing wrong with China, Japan and other mercantilist Asian states supporting their own industries and exporting advanced technology and manufactured goods -- as long as they import our products in those categories as well.

In the 1980s and 1990s, not only Reaganite conservatives but also Clintonite neoliberals, many of them now staffing the Obama administration, insisted that the U.S. must not under any circumstances have an "industrial policy." Well, the U.S. does have an industrial policy, whether the Reaganites and Clintonites like it or not. America’s industrial policy is being made at the expense of America’s interests, in China and other mercantilist countries -- and in the executive suites of many American multinationals. East Asian governments and the American CEOs who collude with them have assigned the U.S. economy the role of supplying raw materials and consumers for East Asian factories.

The time has come for America’s industrial policy to be made in America once again, rather than in foreign capitals.