Why my kids watched me give birth

I wanted them to witness the pain and emotion of life. Then I started screaming -- and my daughter started crying 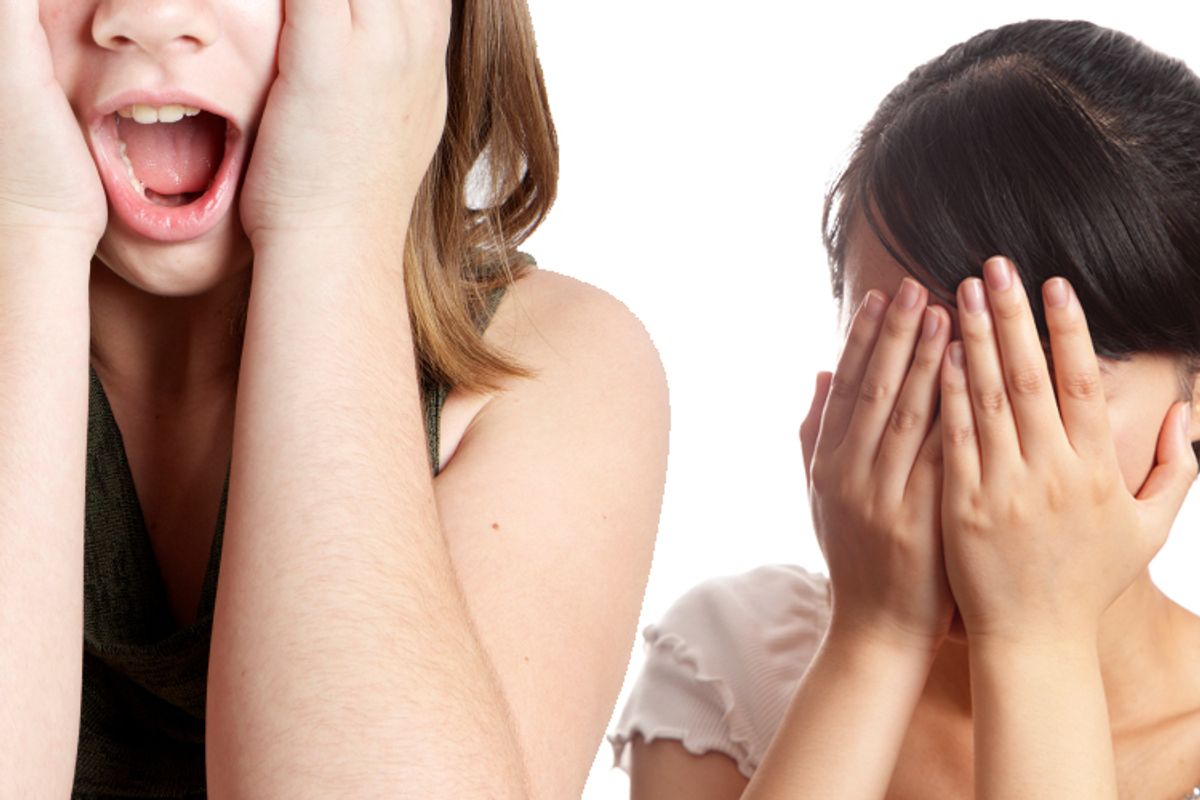 Deep into my third pregnancy -- days and days past my due date -- I asked my two daughters whether they wanted to be at home for the birth.

"No," echoed her 3-year-old sister, Frances. Frances would chew glass if Beatrice said she thought it was a good idea. I knew she was just going along.

"Fine, but will you be OK if you have to be home while I have the baby?" I asked. "You know, if we can't get ahold of someone to come get you?"

"Well, we'll figure it out." That's my mantra when I'm faced with too many or too few choices. I tucked my daughters in and closed the door.

That night, I went into labor.

I'm not exactly Type-A and planning doesn't come naturally to me. Added to that, this was my second home birth. It was easy not to get worked up over the details. It wasn't until two weeks before my due date that I finally requested the results of a first-trimester sonogram and genetics test be sent to my midwife. I had to pay rush shipping for my birth kit -- all the sterilized gauze pads, alcohol swabs, gloves and goop the midwife needs at the birth. We had only just picked names. Where to send the girls while I labored and birthed their younger sibling was even lower on my list of urgent tasks.

Ideally, I thought, I'd shoot this baby out during school hours and we wouldn't need a plan. Everything was falling into place.

Between the short, regular contractions that morning, I helped the girls get ready for school. Once they left, I called my midwife.

"No big deal," I told her, "but I'm definitely in labor." Then I updated my Facebook status, "… is in labor!" And I watched TV. In labor.

After the 30-minute school/preschool dropoff circuit, my husband came home, where he would conduct his workday. Between checking e-mails, he rearranged furniture. After editing a manuscript, he set up the labor tub, an inflatable plastic kiddie pool with a noticeable off-gas. I sipped coffee. I contracted. I sipped water. I contracted. "Still having contractions," I told my midwife around lunchtime. "Still no big deal."

My husband, Wayne, asked for the plan. "Where are we taking the girls?"

"Not sure," I said to him. But, at that point, I was. I wanted them with me, the image of their brother's birth burned in their brains. Not at all for sentimental reasons, though. No, quite the opposite.

Here's what happens once you've given birth at home, which I had, nearly four years before: You're called a hero, told you're brave, held up as the opposite of your best friend who had a planned C-section. You're now the spokesperson for all things "crunchy" (including Waldorf education, which makes you giggle, and vegetarianism, which makes you crave pork chops). Your e-mail address gets forwarded to pregnant sisters/friends/co-workers who want to talk to you about "natural birth." It's all a part of the home-birther package.

But the praise isn't true (like hell, I was a hero), crunchiness gets exaggerated, and the conversations, encouragement and reading lists for the "natural birth" hopefuls, in my experience, mostly led to the operating room. By this third pregnancy, I had grown weary of assumptions people made about me, my lifestyle, my parenting. Just mentioning a home birth was interpreted as judging women who prefer hospitals. I sensed moms offering me excuses for their epidurals when, really? I just wanted to sniff their newborns' heads. During this pregnancy, I avoided talking casually about the politics and practices of modern-day childbirth. Unless it was with my two daughters.

Them, I wanted to know everything. And they did.

I told and retold their birth stories, I read them other people's birth stories. We looked at books, talked mechanics. I described the pain, the emotions, the little things (like Beatrice's hangnail at her birth) and the big things (like crapping on the floor during Frances').

So it was with education in mind -- education with a whiff of indoctrination -- that I wanted them to see a woman give birth. Sort of a health class video meant to supplement the textbook and lectures. After all their excitement and knowledge, I was sure they'd enjoy being a part of it.

Three o'clock. No baby yet. Time to pick the girls up from school. My husband filled up the pool with warm water before heading out. Then he left me.

And that's when I started having the baby.

Contractions came on hard and, oh, so frequently.

I called my midwife, who could get to our place in 20 minutes. I called my husband, who hadn't been gone more than 10.

"Where are you?" I whimpered.

In the background, I heard Beatrice's worried voice: "Is Mommy OK?"

"Was that Mommy?" She was scared. I knew that soon she'd be crying.

"Should I come home?" Wayne asked. He had just started the cross-town trip to Frances' preschool. "What do you want me to do about the kids?"

"Just get everyone and come back," I said. "We'll figure it out."

Another contraction. I hadn't figured it out. It was too late for a Plan B.

The contractions were suddenly hard. And coming really, really fast. Again, I called my midwife.

"The tub ... should I get in the tub or stay out?" I asked. I couldn't remember if the tub slowed things down or sped them up.

I stayed out. Every fact I had ever learned about birth shuffled through my mind like flashcards. Lights trigger adrenalin, which slows or stops labor.

I turned on lights.

Noise, voices, talking ... takes you out of the zone, gets you thinking, which triggers labor-slowing adrenalin. I turned on NPR. I listened. I thought. So many thoughts! I repeated what I heard, out loud, to the fish spray-painted on the pool. Another contraction. When that was over, I thought some more.

Wine. I was once at meeting of home-birth moms, years before, and I overheard one woman telling her birth story. "I drank a glass of wine to slow things down," she said. "But my labor wound up totally stalled."

Totally stalled, totally stalled. I uncorked. I poured. I concentrated on closing-bell stock reports and the Dow.

Now I was groaning. Contracting and groaning. And guzzling wine.

Finally, my midwife arrived, along with her daughter.

Then Wayne arrived, along with ours.

"Hey, guys," I said before moaning as they walked through the door. My voice was shaky, and I gritted my teeth. Beatrice wouldn't look at me.

I couldn't hug her because I needed my arms to tear off my pants, I was so desperate to get into the pool. "Don't worry, sweetie," I called out, half-naked and stepping into a pool where our coffee table had been. "This is all very, very normal."

Frances asked if she could stick her hand in the water, but Beatrice walked straight to her room. She was crying. She was scared.

How could I have not figured something else out?

Beatrice is a sensitive girl, especially when it comes to her mother's emotional state. She can tell from just a slight change in my breathing that a movie has me choked up. In general, she's fine with physical pain and sadness -- splinters, saying goodbye to grandparents. But she's not fine with the idea of pain -- tweezers with which to extract the splinter, a car ride to the airport.

Knowing this, we had talked about the noise I might make while in labor. We had also talked about possible emergency scenarios. Perhaps I had underplayed the former and overplayed the latter. Either way, each sound I made took her further away from the idea of a sweet baby and closer to the idea of losing her mother.

There was no way to stop and no way to muffle the noise. Our house is small. Less than 700 square feet. She heard every sound I couldn't stifle. I heard her every stressed-out whimper my groaning triggered.

"Go tell her I'm fine," I barked to Wayne. "Tell her it only hurts during the contractions."

Another contraction. I was really loud and couldn't help it.

Wayne was back at the pool. "She said she's going to faint."

"Mommy's OK," I yelled. "Come out and talk to ..." An agonizing groan finished my sentence. Another contraction.

"Here," I said, handing my husband the digital camera. "Take a picture."

I grabbed my full glass of water ... moaned through another contraction ... then smiled holding the glass up high as if saying a toast. Click!

"Now go show her I'm smiling," I growled. Another contraction. Another moan.

A few minutes later, Beatrice came out of her room.

"I don't want to be here," she said, crying. I squeezed her hand. And then grimaced.

"Remember what we talked about?" I asked her after the contraction ended. "How it hurts but then it stops?"

"No," she said. "You said you wouldn't be very loud." True. This was definitely my most vocal labor.

An hour later, my midwife tried unsuccessfully to coax me out of the tub. Shortly after that, I felt the urge to push.

That's when I got really noisy. My half-minute moans turned to deep growls and sometimes ecstatic-sounding pants, which made me self-conscious but apparently Beatrice less worried. Eventually, she and her sister came out and gathered around the pool.

"Reach down and feel the baby," the midwife urged me. After that, the head was out.

I shut out the noise, pushed through the pain and squeezed my son out the rest of the way. I reached for him while still on my knees and then turned to rest my back against the side of the tub.

Happy, relieved and a little overwhelmed, I threw my head back against the side of the pool to look at Wayne. My cheek brushed against Beatrice as she reached over to touch her brother's back. I pushed my head into her side, an armless hug, a reassuring nudge. I felt her solid body and her softness next to me.

After the cord was cut each sister took turns with their brother. In the meantime, we chatted, I answered the midwife's questions, remembered to actually nurse the little guy.

"So what did you think?" I asked the girls, the adrenalin rush making me extra-effusive. "Aren't you glad you were here?"

Madeline Holler is a writer and mother of three living in Long Beach, Calif. She is a regular contributor to Babble.com's Strollerderby blog.