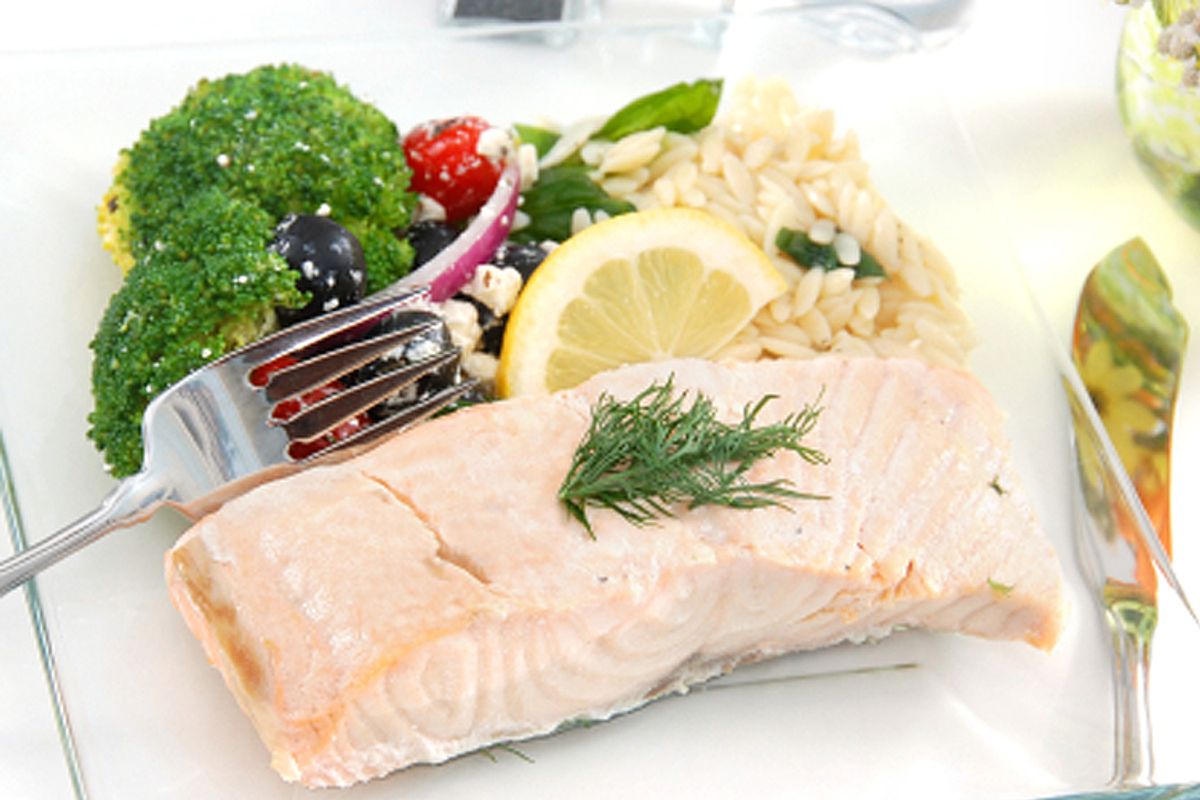 Trout is delicious but always a minefield of tiny bones. Tuna is too redolent of the tuna sandwiches in my school lunches. You have to fight a cracked crab, and lobster disagrees with me. But I can't remember a time when I didn't love salmon. It has never let me down. Salmon is so delicious in and of itself and is such a pretty color when cooked, that I believe it benefits most from being cooked simply and allowed to shine as an entrée in its own right. So, sorry, no salmon mousse, soufflé, pasta or croquettes from me.

My two favorite ways to prepare salmon are broiling or poaching. To broil it, all I do to it is squeeze some lemon over each piece, sprinkle it with salt and pepper and then push it under the broiler for about seven to 10 minutes on a side -- an easy dinner even for a weeknight. I confess, I usually have some mayonnaise right out of the jar with this, along with some lemon juice, salt and pepper.

For this kitchen challenge, I decided I'd buy a good bottle of white wine and make a real court bouillon for poaching my salmon. Thus, I invested in a bottle of Vouvray, delicious, clean and mellow enough to slip right down my throat. It's under $20 a bottle -- an indulgence, yes, but not to the tune of "We're drinking Junior's college fund."

Until I started researching recipes, I'd thought the "court" in court bouillon referred to a method of poaching employed at the French royal court. Turns out the "court" is French for "short," as in "boiled for a short period of time." Shame on me for having forgotten so much of my high school French. I did like the image of some King Louis the Umteenth enjoying his poached salmon, though. I think even the pampered crowd at Versailles would have enjoyed a nice piece of poached fresh salmon on their golden plates.

When one poaches fish in a bouillon, it's a low-heat but fairly quick cooking method that renders the salmon very moist and tender and infuses it with flavor. You really pamper that fish. Court bouillons start with a combined base of water and white wine, into which you put aromatic vegetables such as carrots, onions and celery -- aka mirepoix, the Holy Trinity of French cooking -- salt, whole peppercorns, lemon juice or vinegar, and the herbs and seasonings of your choice, and simmer it for less than an hour. Making the bouillon itself is the longest phase, but not at all difficult. And once you poach the salmon in it, it quickly becomes a richly flavored sauce.

(If you're cooking a whole salmon in a fish poacher, you'll want to multiply all of these quantities until you get enough liquid to cover the fish)