But that doesn't make it smart politics for him to say so -- in an election year, no less! 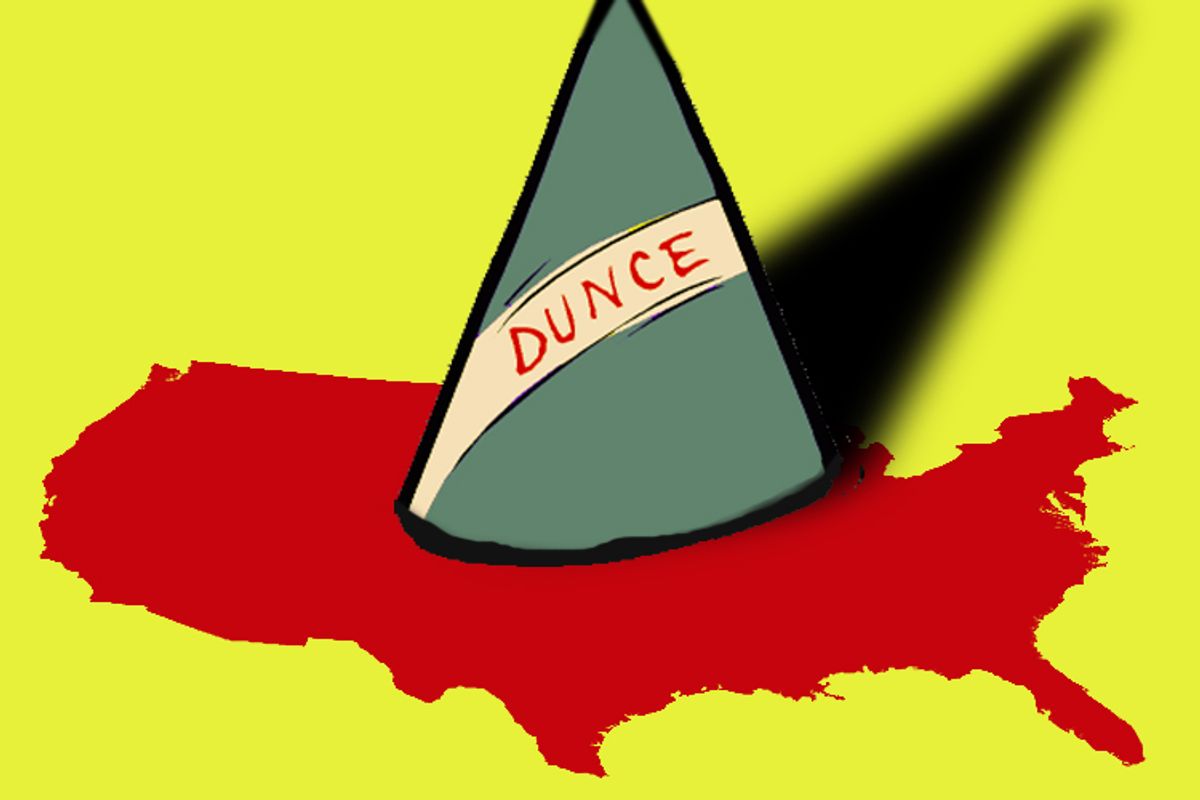 John Kerry isn't usually someone many people get that riled up about, so I was shocked to discover that the right wing has decided this week to claim to take offense at his statement during a tour of the Boston Medical Center that the electorate "doesn't always pay that much attention to what's going on so people are influenced by a simple slogan."

A quick check turned up citations of the senator's remark by Michelle Malkin, NewsBusters, Tucker Carlson's The Daily Caller, and the right-wing blog Legal Insurrection, which apparently started the ruckus.

Are the conservatives that desperate? It occurred to me that if there really is no better target than Kerry for their angry arrows their quiver must be close to empty. Happy thought: Maybe the Democrats have a chance in November, after all.

Alas, I fear not. Kerry was merely the innocent victim of a classic conservative drive-by shooting. It wasn't Kerry they were aiming at. It was the Democrats' presumed elitist pretenses. He was merely a convenient target of opportunity.

In Kerry's defense it should be noted that nothing he said was actually the least bit controversial -- if one takes into account the facts, something admittedly that is not terribly popular in American politics. Studies since the 1940s have consistently shown that Americans by and large don't pay much attention to politics, and when they do it is apt to be because somebody has nicely captured their feelings about the times in a reductionist bumper sticker slogan.

Just how ignorant are Americans? Three facts. Only one out of two know the Constitution was drafted in Philadelphia. Only one in five know there are a hundred U.S. senators. Only two in five can name the three branches of government. Please note that in each case the part of the electorate that has been found to be knowledgeable about our history and our government is in the minority.

Poor John Kerry. He has the facts on his side and thinks that matters. Does the man not understand how politics is played these days? How it has been played for going on 40 years, ever since George Wallace denounced pointy-headed intellectuals and Richard Nixon discovered the virtues of the Silent Majority?

Does he not remember being demonized as an effete, wine-swilling, French-speaking, surfer boy-man who hunts in clean clothes and resides in a mansion?

I have some news for Mr. Kerry. Nothing's changed since 2004. We are the same country we were then, Barack Obama's election notwithstanding. Even Obama had to sing about hope and change and Yes, we can as if those were more than empty slogans. (His biographer tells us Obama was embarrassed by the latter slogan. Good for him.)

If the senator wants to join the nascent movement to restore civics to the school curricula -- a movement I heartily embrace -- by all means let him do so by giving a serious address on the subject from the floor of the Senate and then rallying his fellow solons to provide the necessary funding. But he should not be tossing off bons mots in passing about ignorant voters. That plays right into the hands of the Republicans, who are all too ready to rally voters by appealing to faux cultural populist motifs.

John -- may I call you John? Voters don't like being told they are ignorant. Telling them they are in the middle of an election inspires, well, a negative reaction. This comment I found on a conservative blog in response to your statement is representative: "Halp us, Jon Carry, were to stoopid! Pleeze tell us the facks!" Or as the Boston Herald put it in a caption to the story the paper ran, you seem to believe "clueless voters are to blame for Democrats' uphill fight against Republicans." Am I getting through, John? This is no way to win votes.

As for Republicans. Please! Just because you can play the populist card to great effect doesn't mean you should. Let me pretend to be Jon Stewart for a moment. Aside. Camera two ... Can't we agree that it's cheeky to claim to be on the side of the little guy while favoring tax breaks for the wealthy, as you guys keep doing? Isn't that a bit rich? You can't play the race card anymore because racism is now politically incorrect, but it's OK to play the populist card? Shouldn't that be politically incorrect, too?

Back to camera one. Folks of both left and right: We can do better, can't we? Don't we have to? If only we put as much effort into arming voters with the facts as we do manipulating them, might we not have smarter politics? Don't smarter voters equal smarter politics? Hey, it's just a thought. But don't we want to live in a country with smart voters?

Maybe some of us don't.

Rick Shenkman is the author of "Just How Stupid Are We? Facing the Truth About the American Voter" (Basic Books), and vice president of VoteiQ.