The most depressing hot dog stand in America

A classic Chicago dive sells the world's greatest franks, but turns into a boiled-over hate fest every weekend 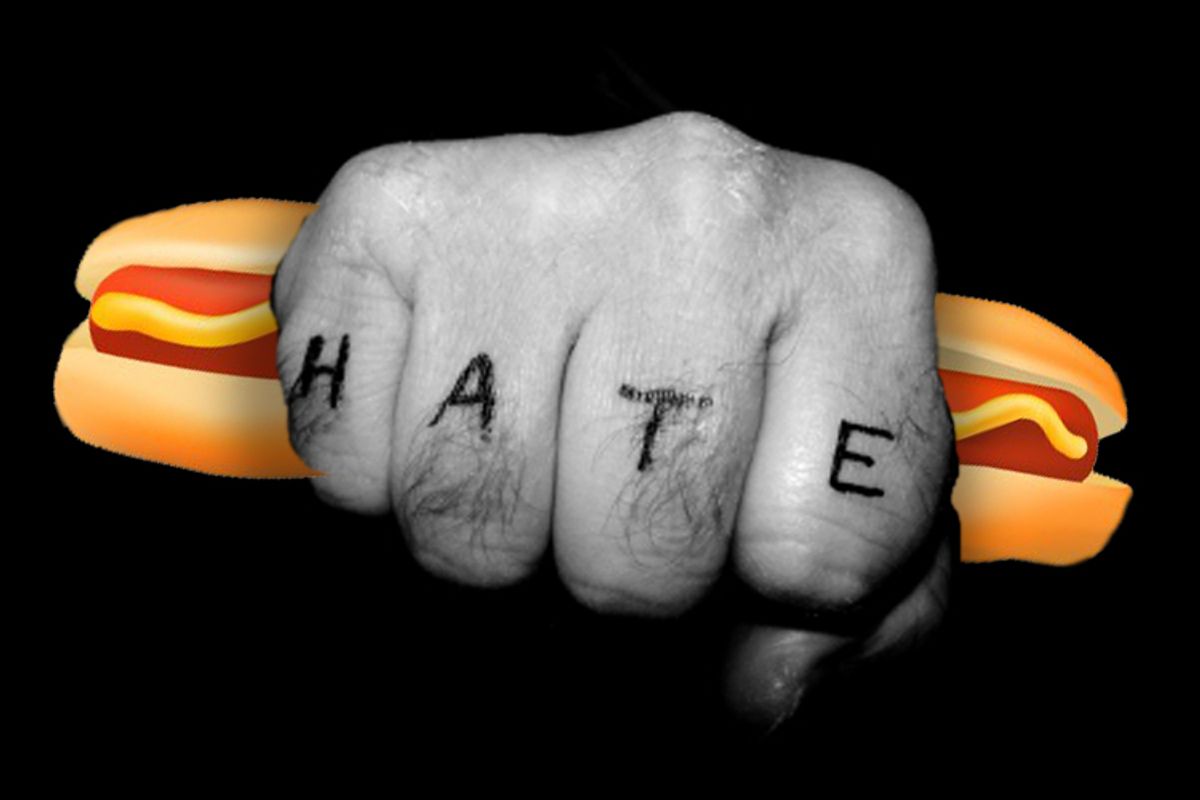 Here is what you can expect in a good Chicago hot dog: an absurdly juicy frank (most likely from the excellently logoed Vienna Beef), a luxuriously smushy bun, and a cavalcade of condiments: yellow mustard, chopped onions, a wedge of pickle, tomato slices, hot sport peppers, a few dashes of celery salt, and an otherworldly neon green relish, so bright you can read by it. These are hot dogs in their highest form. The flavors combine and recombine in endless variation as you eat, and the textures are all there: crunch, snap, chew, squish. This is a sandwich that inflames Midwestern passions.

And so it was no surprise when my friend Emily told me about the Wiener's Circle, a classic dog dive famous for its hot-tempered service. "It's just people screamin' and cussin'," she said. "And women taking their shirts off. I grew up going there, but then I had to stop."

Emily is a sweet soul, good-natured and kind, and so I just chalked up her resistance to prudishness. After all, Chicago is a town filled with colorful dogs, and even the gentle of tongue can have their fill of tube-steak fun. Take Chubby Wiener, which, even aside from the more-than-you-wanted-to-know name, offers a special called the Capitalist Pig: $250 for one of their superlative dogs and a bottle of Johnnie Walker Blue Label Scotch. Or the appropriately named SuperDawg, which works under the watchful eye of a 20-foot frank, broad-chested and strapping in his yellow Tarzan loincloth, impressing the females of his species with flexed muscles.

So I head over to the Wiener's Circle, decades-old and looking like it in a long-gentrified upper-middle-class neighborhood. The dogs were fantastic, classic and perfect, with the slight tweak of an optional char on the grill (purists like them steamed). I marveled at the kitchen, where the cooks' main activity seemed to be yelling unintelligibly at one another, despite the fact that it was the middle of the afternoon and there was hardly anyone to make hot dogs for. Still what orders that did come in -- additions, substitutions and all -- got filled swiftly and exactly, from memory and maybe telepathy. Where people extend their arms to take the food from the counter window, there was an empty mayonnaise container, on which there was a message: "YOU WILL TIP THE JAR, BITCHES!" You won't see that at an Applebee's.

I didn't know how to feel, then, for a young woman, roughly the size of a fire hydrant, who came back to the window with a complaint about her lunch. "It's ..." she started, then, more softly, "a little burnt." The man behind the counter, thin and bony and all hard angles, looked down at her. "Burnt? Huh?" he said with a menacing drawl, taking her hot dog in his hand.

"Next time, go with the steamed," I prayed for her.

"Burnt?" he said again. She looked straight ahead, as if nothing was happening. "F*@# burnt! That motherf#$@*er CRISPY!" he yells, pointing her coal-black dog in the face of one of the cooks. He turns to smile at the woman with a tinge of flirtation. "We'll get another one for you," he says.

"See?" I told Emily after seeing that random act of, er, kindness. "It's cool! It's all a joke!" She shook her head. "At night is when it gets bad."

Suddenly, you hear women get called the names of various domestic and wild animals, and you get all kinds of lessons in human anatomy from both the kitchen and the customers, hurling invective on the attack and in defense. It's possible, for a while, to think it's all good theater, that everyone is just letting off steam, but the tell is in people's faces when they're not open-mouthed and screaming. The crowd is laughing, having fun, and you hear people comment, titillated, on the quality of the show. But the staff look tired, and maybe a little bit sick to their stomachs. This is their job.

At some point, the room becomes a chorus of curses and racial epithets, and it becomes impossible not to notice that the staff, the battle-hardened staff, are all black, and the crowd nearly entirely white, male and drunk. Some of the cracks are funny, especially from the people who work there, who have had plenty of time to sharpen their tongue and their wit. But it becomes hard to laugh when you can feel how hard that clever crack is working as a shield, trying to defend against all the rage in the room.

Chants of "Chocolate milkshake" stir in the crowd. Rhythmic, pulsing, the voices calling for the chocolate shake get louder, with people banging on things, even in the kitchen. The place is in an utterly warlike state. A server, a woman, looks uninterested and annoyed, and then, exasperated, starts demanding money. When she gets enough, her shirt comes up, and the crowd cheers, victoriously, at the sight of her enormous, quivering breasts. They got their chocolate shake. I hear the tips are great. I hate this place.