Is my nanny a better mother than I am?

We're both Latinas in our 40s. Yet she relates to my son in ways I couldn't dream of 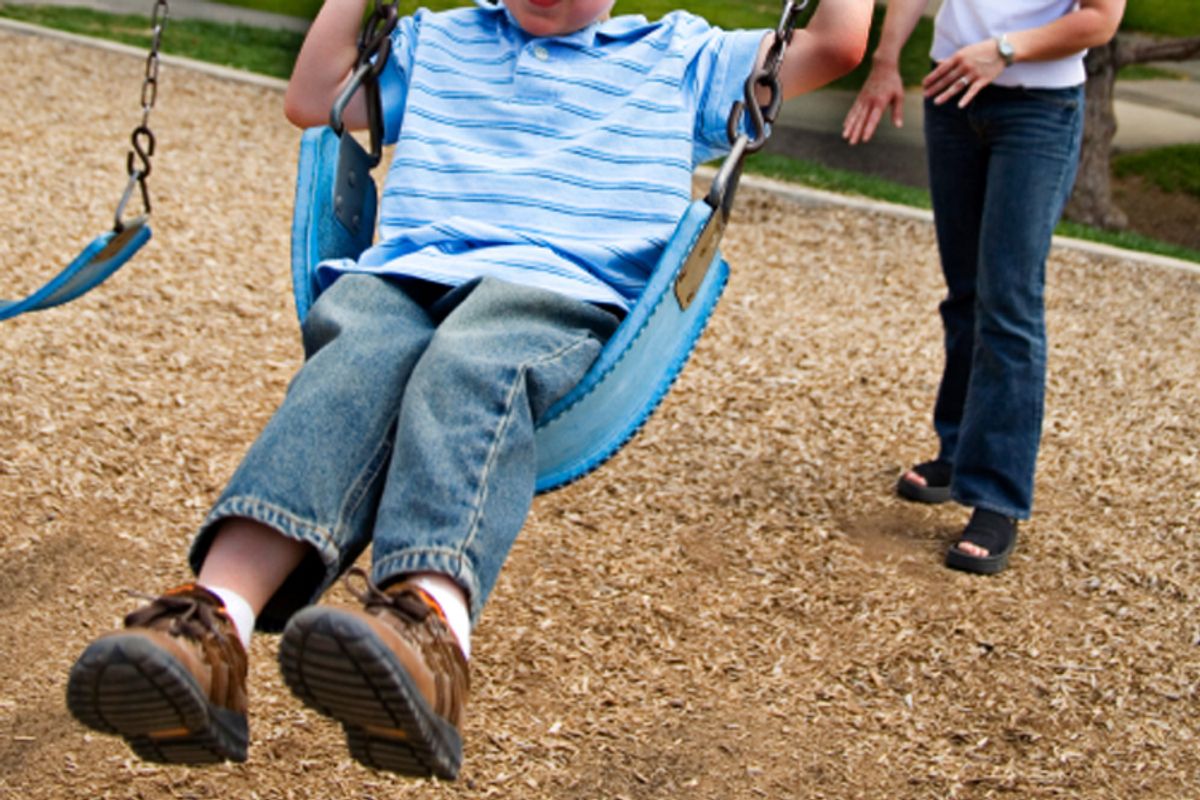 As the first woman in my family to go to college, I never thought I'd become a mother. While my relatives pumped out babies at 16, 17 and 18 years old, I studied for finals, got my degree and launched myself into the corporate world. A family was for those other women, the ones with no vision beyond their own kitchen. Not me. And my conviction held, unshaken, for more than 20 years, even through a first marriage and divorce.

But then I met my second husband. He was a rare breed, a retrosexual with motor grease under his fingernails and a garage stuffed with tools, but who also wept unashamedly and wasn't threatened by a mouthy New York-Puerto Rican with an Ivy League degree and a weight-lifting hobby.

And then I had a fateful visit with a gynecologist who asked me why at 40 I was bothering with birth control. "Either get the tubal or get pregnant now. You are officially out of time."

So I went home and told my husband. And two months later I was pregnant.

If I was extraordinarily lucky to get pregnant so quickly at 40, I didn't get off easy on the rest of the pregnancy. Three weeks of bed rest, then what thankfully turned out to be a minor bleed in my pituitary gland at Aaron's birth, which nonetheless qualified as a stroke and ended my chances of having more children. Breast-feeding was a disaster that ended with my nipples looking like raw hamburger. Two weeks in and even with my healthy, beautiful boy in my arms and my husband frantically working overtime to help take care of him, I was floored by bone-crushing depression.

And then there were the visits from my mother and sister. They were thrilled with the baby, but I couldn't stop myself from reading judgment in their eyes over the way I fumbled in taking care of Aaron. Simply holding him and looking comfortable while doing it felt beyond me. When they left I sobbed for a week and I was gripped by a terrible fear that I'd made a mistake, that I wasn't made for motherhood and here was this beautiful boy with the mysterious dark eyes and I'd already failed him and he was only a month old.

That's when Graciela came into our lives. We'd always planned on hiring a nanny since my husband owns his own business and I work full-time, but now I felt desperate to call in a professional. It was obvious that Graciela was the one from the moment she picked up Aaron. As she cradled him in her arms, he visibly relaxed, his rigid arms loosening and coming to a rest on his tummy. My husband and I joked after the interview that she was the Baby Whisperer, and we learned just how true that was.

Graciela was from Guatemala and a year younger than me. When she came to work for us, her eldest son's girlfriend had just given birth to a boy who was a 24-week preemie -- her first grandchild. They lived out of state, so as her grandson fought for his life in a neonatal intensive-care unit, Graciela cradled my son in her arms, changed his diapers, fed him and waited for texts and photos to appear on the cellphone. I think she channeled her grief and worry into taking spectacularly good care of Aaron. No one could soothe him the way she did. She dressed him beautifully every day. The minute he spit up into a bib, it was whisked away and replaced with a clean one. She sang to him and took him for walks every day. One of my neighbors remarked that she'd seen Graciela and Aaron and she'd "treated your son very lovingly. I thought you'd want to know."

Graciela never read a book or watched the news. The only topics of conversation she ever broached were of her children, her grandchild, her sisters, nieces and nephews, and the children she'd cared for. Her whole world, seemingly. Or at least all of it she ever revealed to me.

And I was grateful, of course. She was the dream nanny, the person everyone hopes they'll find to take care of their child. But she was the embodiment of Latina Motherhood, the example I'd grown up with, the all-sacrificing, never-complaining, edging-over-into-martyrdom ideal. The ideal I'd spent my whole life rejecting, but which now felt like a rebuke. I was a failure, and every point of that failure was made obvious to me every time I saw Graciela with Aaron.

It was really brought home to me the first time my mother met Graciela. I left them at home together and when I returned, they were drinking rum and cokes poured out by my mom and chatting in Spanish like old friends. They got each other. They were standing on the same ground. The ground I'd never been able to inhabit.

I tried to find my own way to mother Aaron. But it felt impossible. Like I couldn't get to him, somehow. I felt usurped, and angry about it, and then guilty for feeling angry. Because if I'd been a proper mother, a natural mother, no one could ever have usurped me. I tried talking to my husband about it but he didn't understand. He was a fantastic father, took to it instantly and absolutely loved it, and he never felt a wall. It should've been a clue to me that something else was going on. But I was too busy ripping myself to pieces to understand it then.

About the time Aaron turned 18 months old, I began to notice that something was wrong. He'd learned his first words a few months before, but suddenly he stopped speaking or making any sounds at all, not even babbling. And he was engaging in some odd behaviors. He refused to touch sand or grass or anything wet, and clung to me in fear at the playground. He wept when he heard loud noises. And was fascinated by spinning objects. Aaron was a friendly kid, affectionate, always smiling and waving hello to people on the street. But something wasn't right. And I, the shut-out mom, the one on the outside, could see it.

I asked Graciela about it, and she pooh-poohed it, saying he was fine, perfect, a perfect boy. And my husband, the proud daddy, also didn't see anything wrong. It made me feel like a particularly shriveled bitch: You don't even know how to take proper care of your son without help and now you're seeing things wrong with him that no one else sees. But I had him evaluated anyway. The diagnoses: apraxia, sensory integration disorder, at risk for autism.

Suddenly, I had a lot to do, a whole lot to do. Therapists to find, and one therapist to fire when I didn't like her. Research, of course, endless research. And crying. I did a lot of that. Staying up all night with grief and worry.

But the diagnosis also gave me more confidence in a weird way. My life, my skills, my experiences -- my degrees, my geekiness, my ability to read and understand research papers, to ask questions of doctors, to probe, to identify useful vs. useless therapies -- all of that was of value now. All of that counted toward being a good mother. It wasn't just about the example I'd grown up with. It wasn't just about what Graciela had to give to Aaron. I had something to give too.

That was the first step. The second was preschool. As part of Aaron's therapy, the early intervention program recommended that we enroll him in preschool, paid for by the state. That meant we were able to keep Graciela full-time while Aaron began his program. And it turned out that preschool was fantastic for Aaron. He began to speak, made friends, and, the best news of all, his therapists were no longer worried about autism. So when the Educational Incentive Program stopped paying after a few months, we knew we had to keep Aaron in preschool. Which meant cutting Graciela's hours to one day a week.

We gave Graciela five months' notice of the job switch. I put ads on online boards and gave people my cellphone number to call me for references. I told them the truth, which was that Graciela was an incredibly loving and attentive person and they'd be lucky to have her care for their kids.

But then it got weird. Graciela didn't seem to be trying very hard to get another job. She wasn't putting her own ads up, she was slow to return calls to people I'd referred to her. And her behavior at home got strange. When I came home from work, instead of coming out of Aaron's room to greet me, she stayed behind when he ran out and shouted, "Mama," and threw his arms around me. If they sat on the floor playing a game and I tried to join in, I could feel her resentment. For the first time, it dawned on me that I felt shut out not only because of my own insecurities but because I was actually being shut out.

I wonder what it's like for her, working for a Latina her age. Does she judge me more harshly? Does she think of me differently than the white women she's worked for? Maybe she doesn't expect much of them. But she's met my mom. She knows where I come from. She knows our families aren't that different. She knows the kind of woman I was brought up to be and the woman I actually am. Does she feel like she's giving Aaron the childhood I should be giving him? Or am I unfairly projecting all this baggage onto her? Truly, I don't know.

In May, Graciela found another job the same week we ended her full-time hours with our family. She now takes care of Aaron one day a week. It was a rough transition for him and I feel badly about that because he loves her and she loves him and I want Aaron to have as much love in his life as possible. Graciela seems upset every time I see her now, to the point where even my husband has noticed it, and that truly sucks. I didn't want it to get here. Aaron is the important person in this equation and as long as she continues to be a loving force in his life, I want her to be a part of it.

But the truth is that now that she doesn't work for us full-time, I don't feel like I have to reach around anyone to get to my son. We spent the summer playing games (I'm Spider-Man! Mama is Spider-Man! Let's Spider-Man up the wall together!) and going to the park to kick around a soccer ball, eating pizza, reading books and having a great time. I take Aaron to preschool and just walking down the street in the morning with his little hand cradled in mine is one of the joys of my life. I'm not the mother I was raised to be, not by a long shot, but I think Aaron is getting the mother he needs.