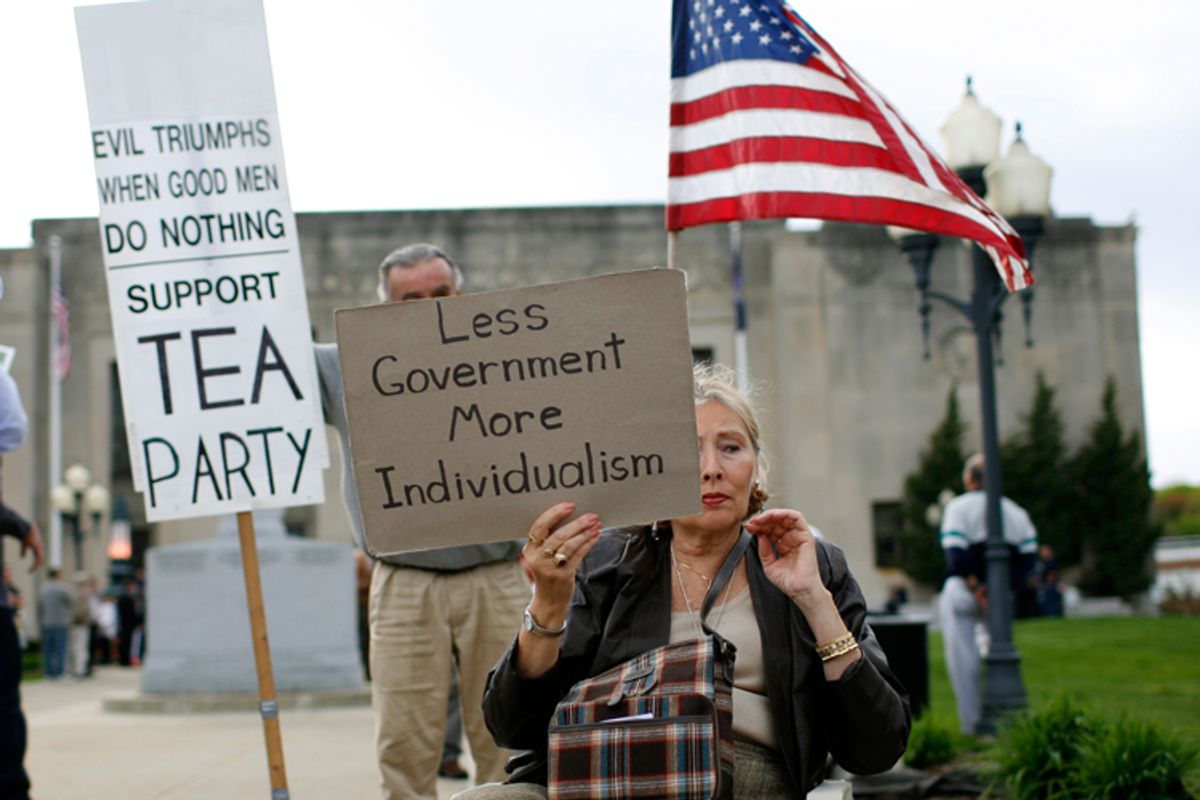 At its heart, I've been arguing, the Tea Party movement is an utterly predictable consequence of the 2006 and 2008 elections, which put Democrats in charge of the White House and both chambers of Congress. When it's locked out of power in Washington, the conservative Republican base tends to adopt a siege mentality, treating Democratic leaders as illegitimate and borderline treasonous and trafficking in irrational hysteria and conspiracy theories.

This is the exact phenomenon we witnessed back in 1993 and 1994, the last time before now that Democrats enjoyed a monopoly on power. Just like Barack Obama today, the right convinced itself that Bill Clinton was a far-left, anti-American usurper. They demanded -- and got -- the same blanket opposition from Republicans in Congress to his agenda, and used the same overheated rhetoric to describe his programs. Everything that's been said and shouted about "ObamaCare" was said and shouted about Clinton's healthcare plan in 1993 and '94. And they were just as personally vicious: Remember the howls when Clinton had the audacity to mark Memorial Day 1993 at the Vietnam Veterans Memorial? Or the videotapes that circulated accusing him of orchestrating the murder of Vince Foster? Or Jesse Helms warning that, if Clinton went to North Carolina, he'd "better watch out ... He'd better have a bodyguard."

The main difference between then and now, I've been saying, is that the GOP base's backlash didn't have a catchy name when Clinton was president. But today, it does: the Tea Party.

And now there's even more proof that the terms "Tea Party movement" and "Republican Party base" are interchangeable. A new poll conducted for NBC News and the Wall Street Journal finds that 27 percent of voters describe themselves as Tea Party supporters. And what do we know about the people that make up that 27 percent? Here's how NBC's First Read put it:

These folks, it turns out, are more conservative and bigger watchers of FOX News than your typical Republican. Per [Bill] McInturff, Tea Party members are simply re-branded conservative GOP primary voters -- not something completely new. “These are conservative Republicans who watch FOX, and who are very ticked off,” he said.

Bill McInturff, by the way, is a longtime Republican pollster. Nor is this the first time the demographic similarities between the Tea Party movement and the GOP base have been documented; we've written about it here before.

But it's impossible to emphasize this crossover enough, given how willing the media has been to treat the Tea Party movement as some unique, nonpartisan uprising of the middle class against Obama's governing vision. In reality, it's just the modern (i.e., post-Rockefeller/Eastern Establishment era) Republican base doing what it always does when Democrats run the show in Washington.

We also saw this in the late 1970s, the last time before Clinton came to office that Democrats controlled everything in Washington. Just like today, the GOP base rallied behind a series of far-right candidates in the 1978 midterm elections, even targeting Republican officeholders deemed insufficiently conservative. Today we have Marco Rubio running Charlie Crist out of the GOP; in '78 we had Jeffrey Bell pushing Sen. Clifford Case aside. (It's true that the GOP base is more upset with its own party establishment today than it was in '93 and '94, but it's undeniable that Obama's election, like Clinton's in 1992, is what's driving the anger.)

There's plenty of middle-class anxiety in America today -- plenty of people who feel let down by, disappointed in, and enraged at their leaders. But that doesn't make them part of the Tea Party.