Don't be fooled by the GOP's sick healthcare rhetoric

Their promise to repeal "Obamacare" might have some appeal now, but just let them try to do it for real 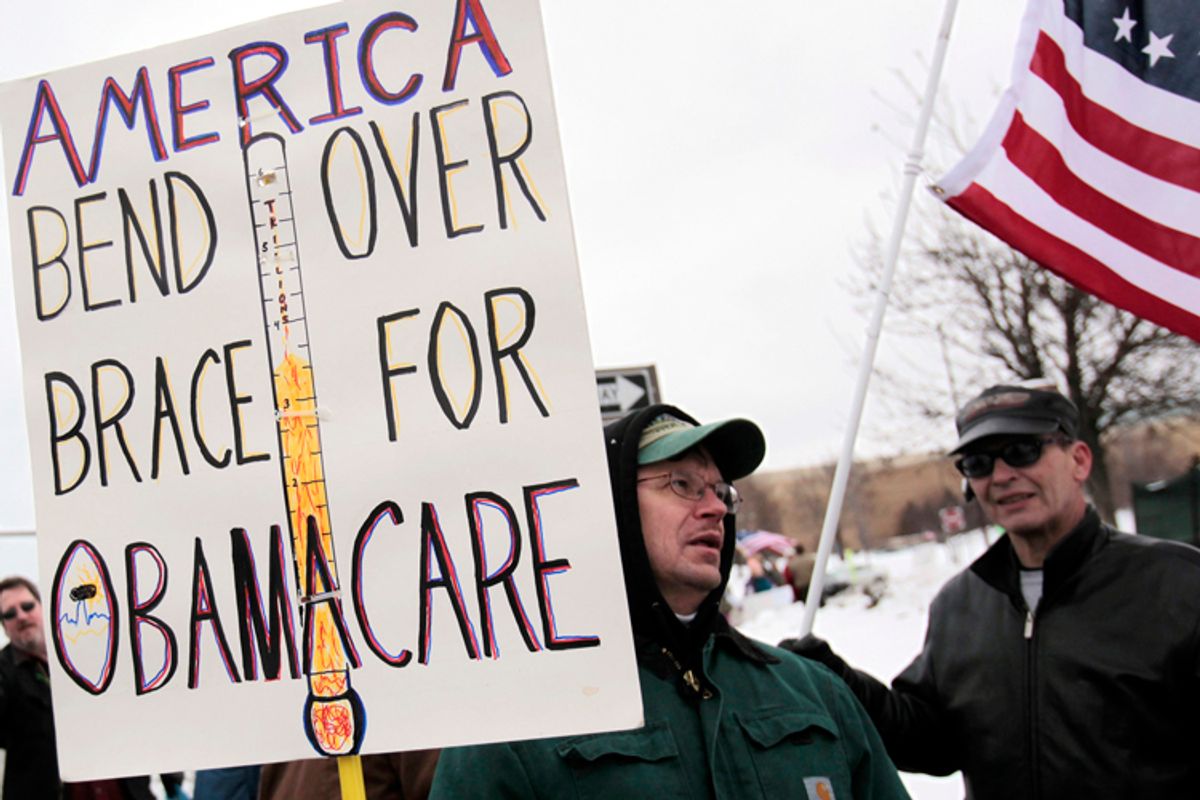 A Tea Party member carries a sign voicing his concern over "ObamaCare" during a rally marking the one-year anniversary of the movement in Troy, Michigan February 27, 2010. Some Tea Partiers say they can pinpoint the precise moment when they made it clear to the Republican Party they had no intention of being its lapdog. On a bright, brisk afternoon in mid-February, with snow still thick on the ground from storms that had battered Washington the week before, Republican National Committee Chairman Michael Steele met with more than 50 members of the Tea Party, the Twitter Age conservative movement that is reshaping the U.S. political landscape. Picture taken February 27, 2010. To match Special Report USA-POLITICS/TEAPARTY. REUTERS/Rebecca Cook (UNITED STATES - Tags: POLITICS CIVIL UNREST) (Â© Rebecca Cook / Reuters)
--

Just how gullible are you? Of the many absurdities in the Republican Party's "Pledge to America," the most problematic may be the GOP's vow to repeal the Affordable Health Care Act, colloquially called "Obamacare." Not the most ridiculous, mind you. That would have to be the vow to reinstate the expiring Bush tax cuts at a 10-year cost of $4 trillion, slashing government spending to 2008 levels while balancing the federal budget.

Is there anybody capable of filling out Form 1040 EZ who buys this latest Republican fantasy? Alas, yes. A clamorous minority remains captive to the GOP's decades-long War on Arithmetic. The more dramatically "conservative" economic dogma fails -- there's nothing conservative about believing in magic -- the greater their cultlike need to believe it.

Obamacare's problems, however, are somewhat of the White House's own making. Polls have shown that while the law's unpopular in the abstract, its constituent parts earn wide approval. That's partly because GOP propaganda, "government takeover," "death panels," etc., scared low-information voters; partly because the bill's so complex that few really understand how it works.

That needn't be an overwhelming obstacle. Few motorists know how their automobile works, but that doesn't stop them from driving. The White House hoped that as Obamacare's reforms took effect, public opinion would swing in its favor. Even people who succumb to dogma on an abstract issue like the federal budget often think more clearly about their personal well-being.

Anyway, regardless of how the 2010 elections go, there's zero chance of Republicans winning a veto-proof two-thirds majority. Hence, repealing Obamacare can't happen; it's a meaningless promise. Furthermore, regardless of what you hear from Fox News and talk-radio blowhards, universal health insurance hasn't "failed everywhere it's been tried"; quite the opposite: No country that's ever adopted it (basically every other advanced democracy in the world) has ever repealed it.

European conservatives don't promise to abolish universal healthcare, but to manage it more efficiently. Hence the longer-term odds definitely favor the White House. Moreover, recent polls, along with the sheer incoherence of GOP rhetoric, make it look as if Republican monkeyshines could end up backfiring badly.

"How would you like to be able to call your insurance agent for your car and say, 'I want you to insure my car,'" he said. "'Well, tell me about your car.' 'Well it was a pretty nice vehicle until my 16-year-old boy wrecked it yesterday. (He) totaled the thing out but I'd like to get it insurance so we can get it replaced.'

"Now how much would a policy cost if it covered everything? About as much as it's gonna cost for healthcare in this country."

Ha ha ha! News accounts say the audience of evangelical conservatives ate it up. To hell with sick people; they're defective. Off to the junkyard with them.

Now as Arkansas' governor, Huckabee presided over a generous expansion of Medicaid coverage for children, and the taxes to pay for it. He's not inhumane, just too glib for his own good.

Indeed, a recent New York Times/CBS News poll found that only 19 percent of the public would support repealing Obamacare if the "preexisting conditions" clause went with it. That's partly because although you'd never know it from watching television, much of the discontent with the law comes from liberals. Another survey by Stanford University and the Robert Wood Johnson Foundation documents that roughly four in 10 respondents dislike Obamacare because it doesn't go far enough. They'd presumably have preferred the government-run insurance option rejected by Blue Dog Democrats.

Therein lies the trap Republicans have set for themselves. How do we pay for fairer, more secure coverage so that people who experience misfortune don't end up forced to choose between healthcare and bankruptcy?

Obamacare does it through an insurance mandate to vastly expand the risk pool. Twenty GOP state attorneys general have filed a federal lawsuit calling that unconstitutional on the basis of a bogus libertarian argument that people can't be penalized for choosing not to participate in interstate commerce.

But this is childish. Courts have ruled repeatedly that people have no constitutional right to refuse appropriate medical treatment. It's a public health issue. Given the option of affordable insurance, such people aren't principled individualists. They're deadbeats, expecting the rest of us to fund hospitals, then sticking us with the bill should their gamble fail.

That doesn't mean the Roberts court might not buy it. But it definitely means there are no magical solutions; in practice, then, no Republican solutions at all.