An angry right-wing revolting against a Democratic president and "impure" Republicans: We've seen this before 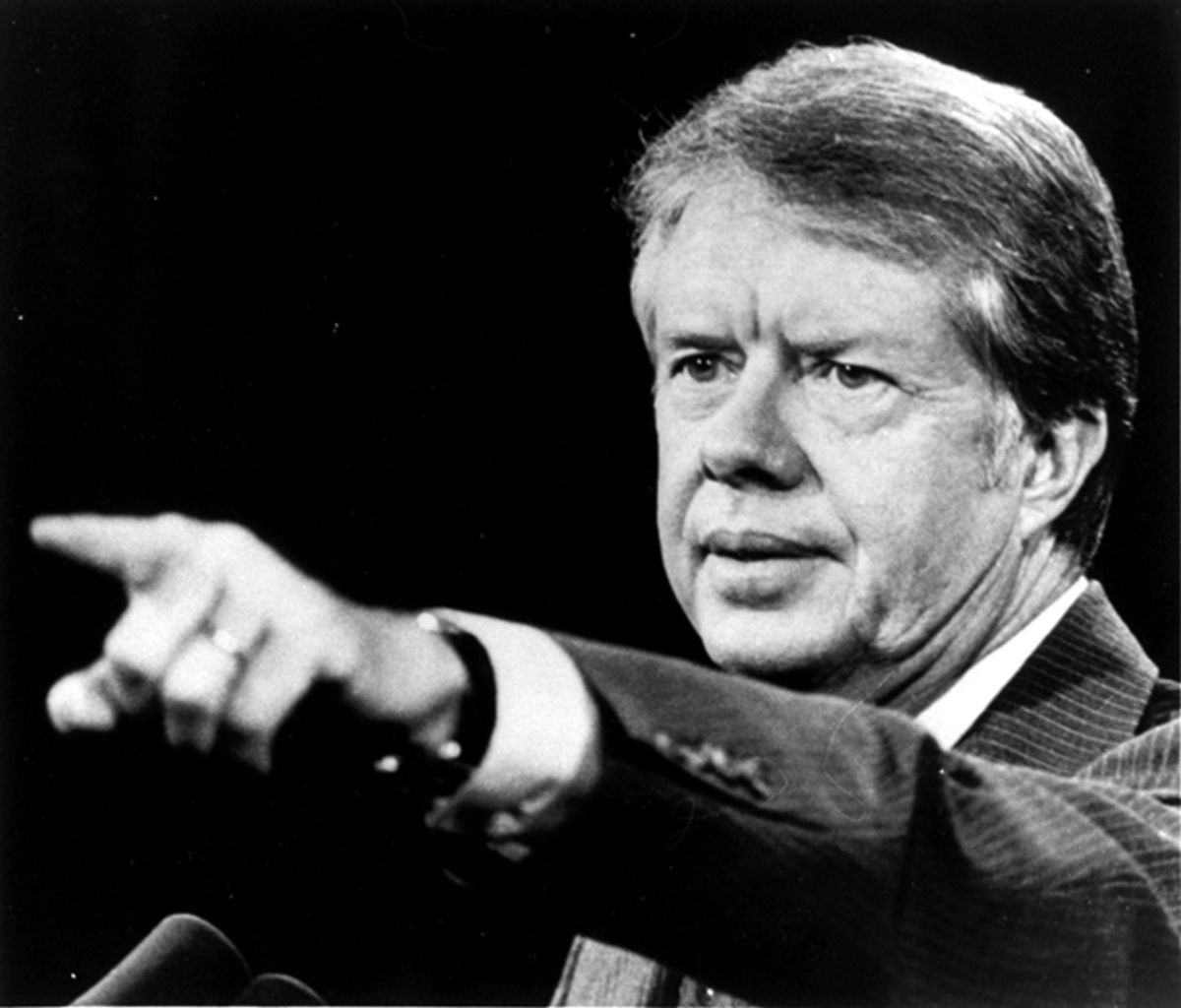 Jimmy Carter has an Op-Ed in the USA Today that makes an excellent point: The 1970s saw the development of a political movement very similar to the Tea Party of today. Unfortunately, he doesn't seem to quite understand the nature of that movement.

In Carter's telling, his dark horse 1976 presidential campaign became a vehicle for Tea Party-ish sentiments. "We capitalized on deep dissatisfaction with the policies and practices of government officials," he writes, "especially those who served in Washington." In reality, though, the Tea Party of his era sprang up from the same place and for the same basic reasons as the Tea Party of today. Then as now, the presence of a Democratic president with substantial Democratic majorities fed a conservative revolt (which was also directed at "establishment" Republicans deemed by the right to be too cooperative with Democrats).

When Carter came to office in 1977, Democrats controlled 62 seats in the Senate and 277 in the House. (This was the last time before last year that a Democratic president enjoyed a filibuster-proof majority, although filibusters weren't deployed nearly as commonly back then.)

Carter found himself on the wrong side of an emotional ideological divide when he began pushing for the Panama Canal Treaty in his first year. The New Right, a growing force within the GOP since Barry Goldwater's 1964 nomination, screamed that Carter was selling out American sovereignty and demanded that the Senate reject a treaty.

To the burgeoning conservative movement, the canal became a litmus test issue. Ronald Reagan, who had nearly stolen the presidential nomination from Gerald Ford in 1976, helped organize a national "caravan" against the treaty, one that attracted support from more than a dozen conservative members of Congress. But the GOP establishment resisted. Howard Baker, the Senate GOP leader, backed the treaty while Bill Brock, the Republican national chairman, refused to offer party money to Reagan's caravan. Finally, the treaty passed with one vote to spare -- and with Republicans offering the crucial support that put it over the top.

Enraged (and already emboldened by their near-miss with Reagan in '76), conservatives committed themselves to using the 1978 midterms to take out not just Democrats, but also Republicans who sold them out on the treaty. In this sense, the Panama Canal Treaty can be considered the Carter-era's equivalent of TARP, which seems to animate today's tea Party movement more than any other issue.

In the '78 primaries, conservative activists pulled off a shocking upset in New Jersey, ousting four-term Republican Sen. Clifford Case (a treaty backer) and replacing him with Jeffrey Bell, a former Reagan aide. And in Massachusetts, two-term liberal Republican Sen. Ed Brooke, another key treaty supporter, barely survived a primary challenge from Avi Nelson, a right-wing radio host. And in New Hampshire, Colorado, and Iowa, among other states, the right succeeded in nominating very conservative treaty foes to run against pro-treaty Democrats.

In November, Carter's Democrats ended up losing 15 seats in the House and 3 in the Senate. It wasn't a bloodbath like the one Obama's Democrats are expected to face this year, but this was partly because ideology and party label weren't so synced up back then. What was more notable was which Democrats lost, and whom they were replaced with. For instance, Sen. Floyd Haskell, a pro-treaty Democrat from Colorado, was ousted by the far-right William Armstrong. (How conservative was Armstrong? A few years later, he was actually touted by activists as an attractive prospect to challenge then-President Reagan from the right in 1984 primaries.) In New Hampshire, Gordon Humphrey took out Democratic Sen. Thomas McIntyre. And in Iowa, after upsetting a moderate establishment favorite in the GOP primary, Roger Jepsen unseated Sen. Dick Clark, who had enjoyed a 70 percent job approval rating just a year earlier.

The '78 midterms marked a key moment in the Republican Party's evolution into a cohesive, ideologically conservative party -- a transformation that would be sealed with Reagan's  nomination and election in 1980. Carter is long gone from the White House, but all these years later, we're seeing something similar at work, with conservatives simultaneously revolting against Democratic  control of Washington and "impure" Republicans. The biggest difference is that today we have a catchy name to describe this.