Red alert at Army base over Afghan corpse photos 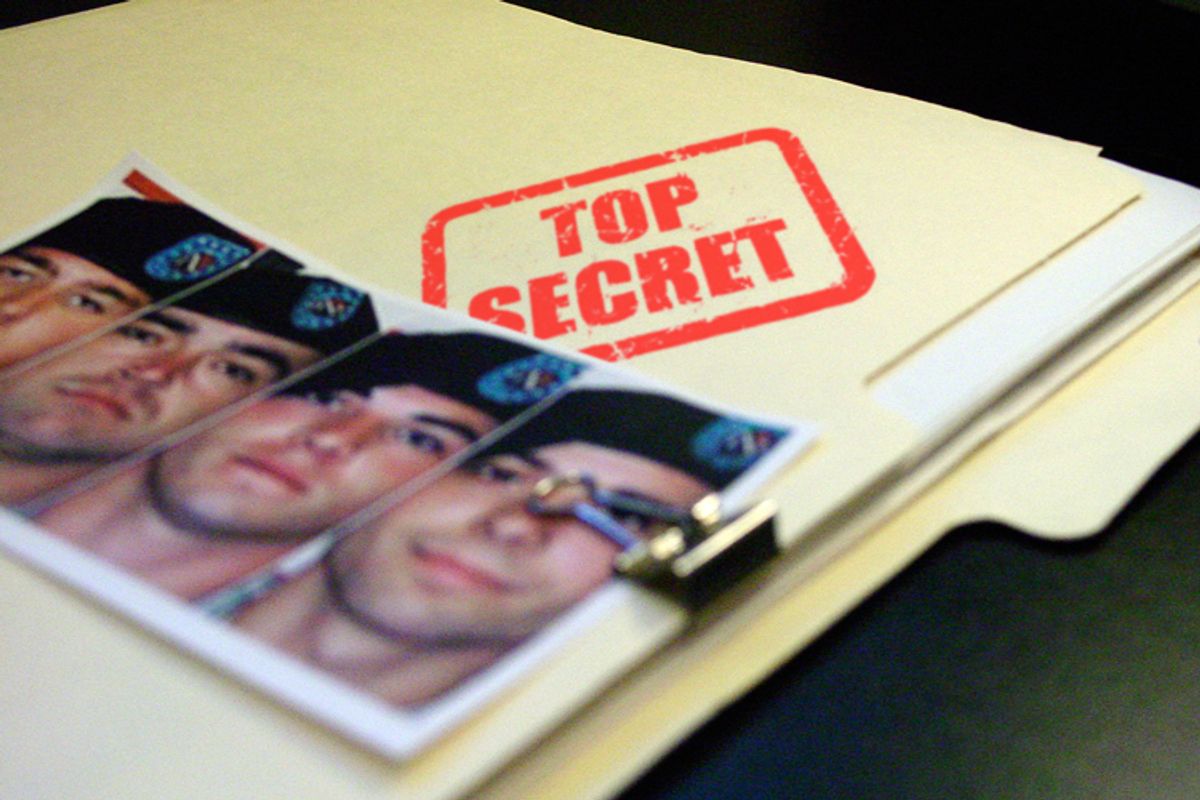 At one point during the Sept. 9 episode, goverment officials were even posted outside the building of the main defense attorneys' office on the base to stop one attorney from leaving with the pictures, according to a memo written by the senior defense counsel at the base and obtained by Salon.

Five soldiers from the 5th Stryker Brigade have been charged with murder in the case, and some are alleged to have killed for fun -- and while high -- and then kept body parts of dead Afghan civilians as souvenirs.

The pictures in question show "three dead Afghans with three different Soldiers posing, holding up the decedent's head. (Each photo was one Afghan, one Soldier)," according to an e-mail by Benjamin Grimes, senior defense counsel at Base Lewis-McChord. Others showed what appeared to be severed fingers and a bone.

According to an e-mail and memo by Grimes describing the Sept. 9 incident, this is what happened:

Thirteen CDs holding over 1,000 pages of discovery -- including the photos -- were given to the defense attorneys' office at the base, which is called Trial Defense Service, to be distributed to lawyers for the accused soldiers. But after realizing that the photos were on the CDs, prosecutors in the case quickly returned to Trial Defense Service and demanded they be given back. Grimes writes:

There followed an exchange of demands and refusals to return the photos. At one point, both the Chief of Justice, LTC Kevin Kercher, and the [Staff Judge Advocate], COL Walter Hudson, were in the [Trial Defense Service] office demanding return of the photos.

At one point during the standoff, "the Government had placed members of the Government outside of the [Trial Defense Service] office and had prevented" a lawyer who had one of the CDs from leaving the building. The government maintained this was a "misunderstanding."

One official told Grimes that "this 'was not a prosecution and defense thing,' meaning he did not believe the Government’s actions were procedural gamesmanship but rather reflected a belief that 'national security interests [were] at stake.'" The Army brass was concerned that lawyers for the soldiers would release the photos to the news media.

Ultimately, the photos were given back the next day, but only after they were ordered returned by Col. Barry Huggins, a commander at the base. (See the order here.) Defense attorneys believe the order to compel return of the photos was unlawful.

Access to the photos, even by defense attorneys, has now been strictly limited by the Army, though it's not clear that they can be kept from public release indefinitely.

Grimes, in an e-mail earlier this month to defense attorneys in the case, said he is "most concerned about two things: the Gov’t believes that it has the authority to retrieve already-provided discovery; and the Gov’t believes it has the authority ... to order Trial Defense Service counsel to do anything. I am sure you are concerned that this office is no longer a safe extension of your own places of business, but let me assure you that every member of this Trial Defense Service office is committed to ensuring all of your Severy benefit available under law, regulation, and ethical canon."

Grimes declined to comment for this story. A spokesperson for Base Lewis-McChord did not immediately respond to a request for comment.