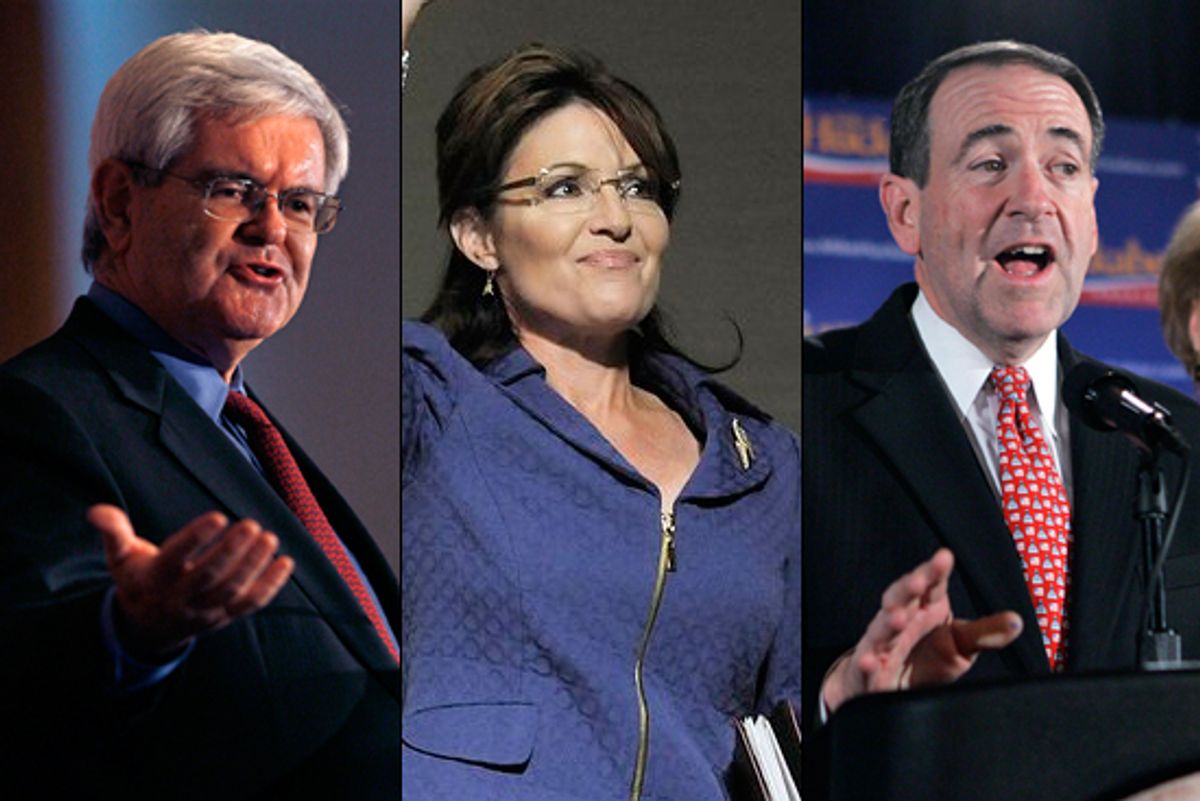 What may be most notable in the new Gallup poll on the 2012 Republican presidential race is the significant distance between Mitt Romney, who leads the crowded pack with 19 percent, and the next candidate without obvious and glaring general election liabilities.  Just consider the results:

With the disclaimer that anything is possible (and the obligatory acknowledgement that many Democrats didn't believe until the very end in 1980 that Ronald Reagan could ever actually win the Whitre House), it's hard to imagine Palin, Huckabee, Gingrich or Paul winning a general election in 2012, even if the economy hasn't improved significantly. They just carry too much baggage, and nominating one of them would likely produce something like what we're now seeing in Delaware, where a radioactive GOP nominee is about to cost the GOP a seat it would otherwise win.

I can't remember so many poiosnous general election prospects near the top of the GOP field at this stage in any recent contest. Last time around, John McCain, Rudy Giuliani and (sort of) Romney were all near the top of the pack early. All of them passed the November electability test. (Sure, McCain fell flat against Barack Obama, but that was more a testament to the political climate; that same race in the climate of, say, 2004, could well have produced a different result.) Back in the 2000 cycle, the big GOP fish included George W. Bush, Elizabeth Dole and McCain. For 1996, we had Bob Dole and Jack Kemp, and in 1988, George H.W. Bush, Dole and Kemp. Sure, there were some toxic prospects in these cycles (Dan Quayle figured prominently in '96 talk and actually ran -- briefly -- in '00), but in each race had more than one general election heavyweight out front early. Not so for 2012.

Moreover, as NBC's First Read noted this morning, Romney's grip on the frontrunner's slot is unusually tenuous. The GOP's conservative base is markedly cooler to him than it was to McCain at this point in the '08 cycle and Dole at this point in the '96 cycle, even as that same base seems to be warming up even more to Palin, Gingrich and Huckabee. Factor in the most alarming GOP Senate primary results this year -- a Republican electorate in Delaware that willfully committed political suicide, for instance -- and it's fair to questions the assumption that the GOP primary electorate of 2012 will be as pragamtic as it's been in the past. Don't forget: the last time the Republican base was as angry at its own establishment as it is now was in the late '70s. Back then, the favorite of the restive right for the next GOP nomination also happened to be the next-in-line guy: Reagan. But Romney, to borrow a tired expression, is no Ronald Reagan. To the New Right of the late '70s, Reagan was practically a god. To the Tea Party, though, Romney is just a somewhat likable, extremely ambitious office-seeker.

This should provide at least a little comfort to Barack Obama. I've written before that his 2012 fate will rest on the economy. If it improves significantly between now and then, he'll win, no matter whom the GOP nominates. And if it doesn't, he'll be in serious trouble. But the evolution of the GOP in the Obama era suggests a third possibility: that the economy will be weak enough to give the GOP a winnable race in 2012 -- but that they'll nominate a candidate who's incapable of taking advantage of it.