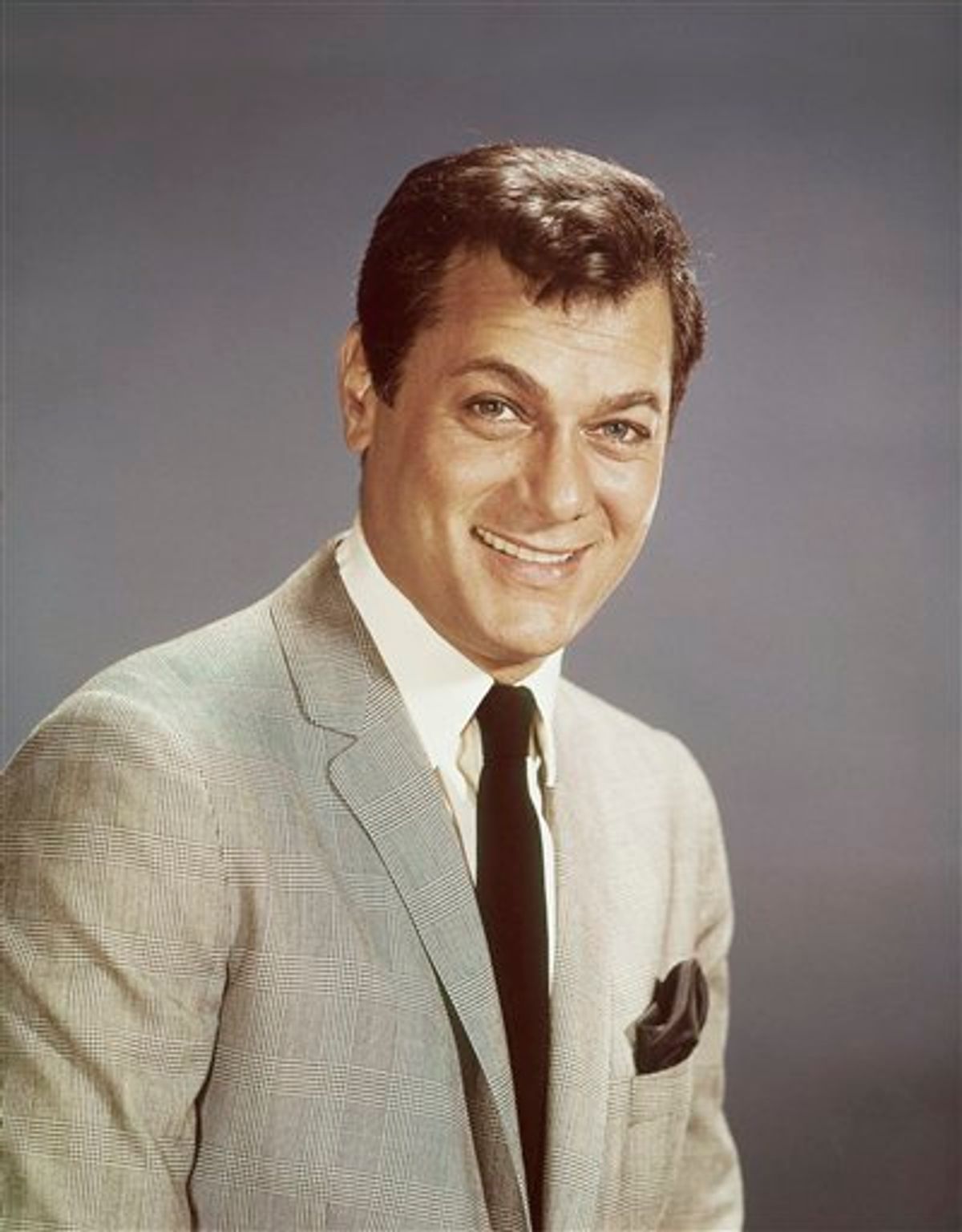 FILE - Actor Tony Curtis is shown in this 1965 file photo. Curtis, whose real name was Bernard Schwartz, was perhaps most known for his comedic turn in Billy Wilder's 'Some Like It Hot' with co-stars Marilyn Monroe and Jack Lemmon has died at 85 according to the Clark County, Nev. coroner. (AP Photo, File) (AP)
--

Tony Curtis, who defiantly worked to mold himself from a 1950s movie heartthrob to a respected actor with such films as "Sweet Smell of Success," "The Defiant Ones" and "Some Like It Hot," has died. He was 85.

Reflecting a determined streak that marked other areas of his life, Curtis began with frivolous movies that exploited his handsome physique and appealing personality but then steadily moved to more substantial roles, starting in 1957 in the harrowing show business tale "Sweet Smell of Success."

In 1958, "The Defiant Ones" brought him an Academy Award nomination as best actor for his portrayal of a white racist escaped convict handcuffed to a black escapee, Sidney Poitier. The following year, he donned women's clothing and sparred with Marilyn Monroe in one of the most acclaimed film comedies ever, Billy Wilder's "Some Like It Hot."

Curtis struggled against drug and alcohol abuse as starring roles became fewer, but then bounced back in film and television as a character actor.

His brash optimism returned, and he allowed his once-shiny black hair to turn silver.

Again he came back after even those opportunies began to wane, reinventing himself as a writer and painter whose canvasses sold for as much as $20,000.

"I'm not ready to settle down like an elderly Jewish gentleman, sitting on a bench and leaning on a cane," he said at 60. "I've got a helluva lot of living to do."

"He was a fine actor ... I shall miss him," said British actor Roger Moore, who starred alongside Curtis in TV's "The Persuaders."

"He was great fun to work with, a great sense of humour and wonderful ad libs," Moore told Sky News. "We had the best of times."

Curtis perfected his craft in forgettable films such as "Francis," "I Was a Shoplifter," "No Room for the Groom" and "Son of Ali Baba."

He first attracted critical notice as Sidney Falco, the press agent seeking favor with a sadistic columnist, played by Burt Lancaster, in the 1957 classic "Sweet Smell of Success."

In her book "Kiss Kiss Bang Bang," Pauline Kael wrote that in the film, "Curtis grew up into an actor and gave the best performance of his career."

Other prestigious films followed: Stanley Kubrick's "Spartacus," "Captain Newman, M.D.," "The Vikings," "Kings Go Forth," "Operation Petticoat" and "Some Like It Hot." He also found time to do a voice acting gig as his prehistoric lookalike, Stony Curtis, in an episode of "The Flintstones."

"The Defiant Ones" remained his only Oscar-nominated role.

"I think it has nothing to do with good performances or bad performances," he told The Washington Post in 2002. "After the number of movies I made where I thought there should be some acknowledgment, there was nothing from the Academy."

"My happiness and privilege is that my audience around the world is supportive of me, so I don't need the Academy."

In 2000, an American Film Institute survey of the funniest films in history ranked "Some Like It Hot" at No. 1. Curtis -- famously imitating Cary Grant's accent -- and Jack Lemmon play jazz musicians who dress up as women to escape retribution after witnessing a gangland massacre.

Monroe was their co-star, and he and Lemmon were repeatedly kept waiting as Monroe lingered in her dressing room out of fear and insecurity. Curtis fumed over her unprofessionalism. When someone remarked that it must be thrilling to kiss Monroe in the film's love scenes, the actor snapped, "It's like kissing Hitler." In later years, his opinion of Monroe softened, and in interviews he praised her unique talent.

In 2002, Curtis toured in "Some Like It Hot" -- a revised and retitled version of the 1972 Broadway musical "Sugar," which was based on the film. In the touring show, the actor graduated to the role of Osgood Fielding III, the part played in the movie by Joe E. Brown.

After his star faded in the late 1960s, Curtis shifted to lesser roles. With jobs harder to find, he fell into drug and alcohol addiction.

"From 22 to about 37, I was lucky," Curtis told Interview magazine in the 1980s, "but by the middle '60s, I wasn't getting the kind of parts I wanted, and it kind of soured me. ... But I had to go through the drug inundation before I was able to come to grips with it and realize that it had nothing to do with me, that people weren't picking on me."

He recovered in the early '80s after a 30-day treatment at the Betty Ford Center in Rancho Mirage.

"Mine was a textbook case," he said in a 1985 interview. "My life had become unmanageable because of booze and dope. Work became a strain and a struggle. Because I didn't want to face the challenge, I simply made myself unavailable."

One role during that era of struggle did bring him an Emmy nomination: his portrayal of David O. Selznick in the TV movie "The Scarlett O'Hara War," in 1980.

His health remained vigorous, though he did get heart bypass surgery in 1994.

Curtis took a fatherly pride in daughter Jamie's success. They were estranged for a long period, then reconciled. "I understand him better now," she said, "perhaps not as a father but as a man."

He also had five other children. Daughters Kelly, also with Leigh, and Allegra, with second wife Christine Kaufmann, also became actresses. His other wives were Leslie Allen, Lisa Deutsch and Jill VandenBerg, whom he married in 1998.

He had married Janet Leigh in 1951, when they were both rising young stars; they divorced in 1963.

"Tony and I had a wonderful time together; it was an exciting, glamorous period in Hollywood," Leigh, who died in 2004, once said. "A lot of great things happened, most of all, two beautiful children."

Curtis was born Bernard Schwartz in the Bronx in 1925, the son of Hungarian Jews who had emigrated to the United States after World War I. His father, Manny Schwartz, had yearned to be an actor, but work was hard to find with his heavy accent. He settled for tailoring jobs, moving the family repeatedly as he sought work.

His sidewalk histrionics helped avoid beatings and led to acting in plays at a settlement house. He also grew to love movies. "My whole culture as a boy was movies," he said. "For 11 cents, you could sit in the front row of a theater for 10 hours, which I did constantly."

After serving in the Pacific during World War II and being wounded at Guam, he returned to New York and studied acting under the G.I. Bill. He appeared in summer stock theater and on the Borscht Circuit in the Catskills. Then an agent lined up an audition with a Universal-International talent scout. In 1948, at 23, he signed a seven-year contract with the studio, starting at $100 a week.

Bernie Schwartz sounded too Jewish for a movie actor, so the studio gave him a new name: Anthony Curtis, taken from his favorite novel, "Anthony Adverse," and the Anglicized name of a favorite uncle. After his eighth film, he became Tony Curtis.

The studio helped smooth the rough edges off the ambitious young actor. The last to go was his street-tinged Bronx accent, which had become a Hollywood joke.

Curtis pursued another career as an artist, creating Matisse-like still lifes with astonishing speed. "I'm a recovering alcoholic," he said in 1990 as he concluded a painting in 40 minutes in the garden of the Bel-Air Hotel. "Painting has given me such a great pleasure in life, helped me to recover."

He also turned to writing, producing a 1977 novel, "Kid Cody and Julie Sparrow." In 1993, he wrote "Tony Curtis: The Autobiography."