The fast food chain is complaining about healthcare reform, reports the newspaper. That's a good thing 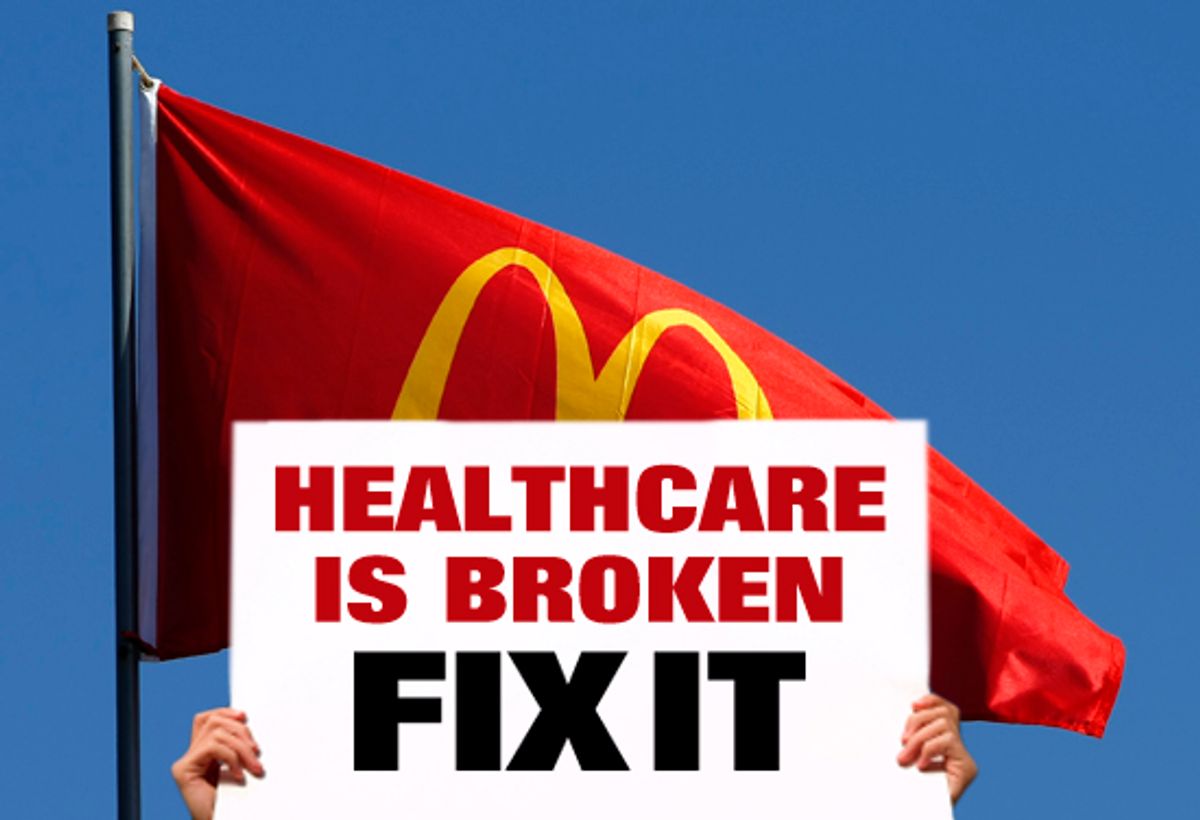 Another day, another big story in the Wall Street Journal warning of problems with health care reform, "McDonald's May Drop Health Plan." Where have we seen this before?

Never mind that McDonald's immediately labeled the story "completely wrong," the White House dismissed it as "overblown" and a score of bloggers raced each other to explain why the Journal was off-base. The damage has been done. The conservative blogosphere/twitterverse sprang into action with a simple message: Obamacare hurts workers. Legions of Republican candidates for office are no doubt incorporating new talking points into their stump speeches even as I write these words. My guess is most of the bloggers, tweeters, and politicians didn't even bother to read the entire Wall Street Journal story, and they certainly aren't going to waste their time on the rebuttals. Consider it a job well done by the Murdoch version of the Wall Street Journal, where the dividing line between editorial and news seems thinner by the day.

But what of the story itself?

The Affordable Care Act includes a regulation that requires insurers spend 80-85 percent of the cash raised by premiums on actual healthcare, rather than on cushy salaries for insurance company executives and other overhead. The Journal got its hands on a McDonald's memo sent to federal regulators asserting that it would be "economically prohibitive for our carrier to continue offering" one of its plans without an exemption from the rule.

And that's really it. A big corporation is trying to squeeze out of a new health care rule by threatening to drop coverage for its workers. It's hard to imagine a more predictable response to reform. Similar attempts are made every day by corporations powerful enough to lobby the government on any number of issues. In fact, you could argue that if McDonalds wasn't resisting healthcare reform that would be de facto proof that the new rules don't have teeth to make any difference. The Wall Street Journal, incidentally, notes that McDonalds refuses to say exactly what percentage of premiums in the plan in question do go to overhead currently, which should be red flag number one.

Jonathan Cohn, at the New Republic and Igor Volsky at Wonk Room have more detailed explanations of what's really going on here, for those interested in getting super-wonky. But here's the big picture.

The McDonald's plan in question, part of a class of plans referred to as "min-meds" is an example of the kind of broken healthcare insurance system that the Affordable Care Act is intended to fix. For 14 dollars a week, employees get about $2000 worth of coverage for a whole year. For $32 dollars, the plan maxxes out at $10,000. This is, of course, worthless for a worker who comes down with any kind of serious medical condition. One of the reasons we need a better healthcare insurance system is because underinsured workers end up costing society more than if they had adequate coverage -- and low paid McDonald's employees are exactly the kind of workers who are likely to be most devastated by the financial hit of a major health calamity.

By 2014, cheap-rate bottom-of-the-barrel health plans of this sort will cease to exist, as they will not meet the requirements of the Affordable Care Act. By that point, Americans will theoretically have the opportunity to buy more comprehensive healthcare through the ACA-mandated Health Care Exchanges.

It's a long way to 2014 from now, and the Wall Street Journal certainly isn't helping by spinning every bump in the road as proof that healthcare reform is fundamentally flawed. In the runup to 2014 it may even make total sense to provide waivers and other accommodations to companies and local governments to smooth the path forward -- and that, in fact, appears to be exactly the administration's plan. There will undoubtedly be unexpected costs incurred along the way. And the private sector will kick and scream at every opportunity. That's totally normal.