"Everyone just wants to kill people at any cost"

What Adam Winfield, one of the U.S. soldiers accused of killing civilians in Afghanistan, told his father 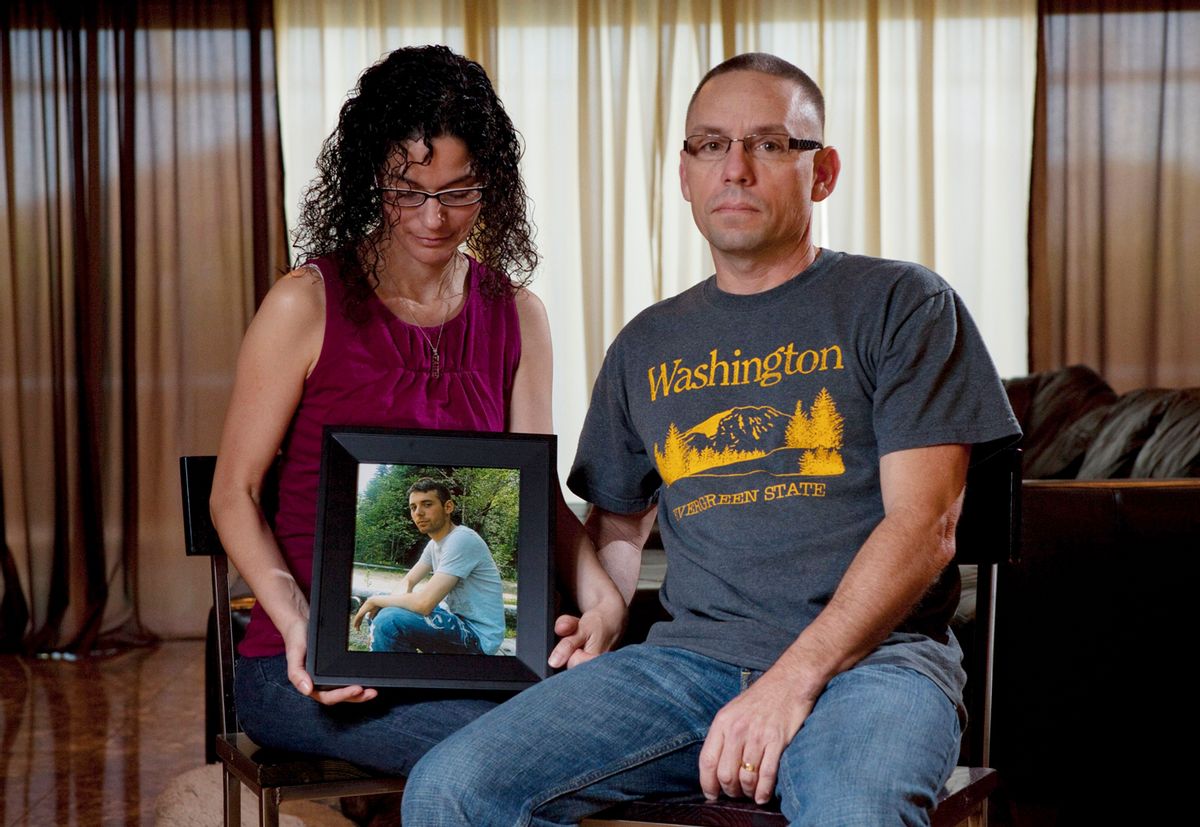 Emma and Christopher Winfield hold a photograph of their son, 22-year-old U.S. Army Spc. Adam Winfield, at their home in Cape Coral, Fla., Friday, Sept. 3, 2010. Adam is accused of murdering civilians during his deployment to Afghanistan, a charge he and his family firmly refute. (AP Photo/Erik Kellar) (Erik Kellar)
--

One of the five U.S. soldiers accused of murdering Afghan civilians in a grisly case now unfolding in Washington state sent Facebook messages to his father early this year in which he claimed to be mortified that his fellow soldiers had purposely killed a civilian. In the messages, Spc. Adam Winfield also indicated that the murder was an open secret among the members of his platoon, and that no one seemed to think it was a big deal.

Winfield wrote his father, Chris, on Feb. 14 about his concern that two members of his platoon had the previous month murdered "some innocent guy about my age just farming." The correspondence from that day illustrates the young soldier's horror at the murder, and also reveals a shocking indifference about the killing among the other troops in his platoon.

"Well, it was two guys who did it actually killed the dude (sic) but the whole platoon knew about it," Winfield wrote to his father. "Theres (sic) no one in this platoon that agrees this is wrong."

Winfield is one of five soldiers in an Army Stryker Brigade from Joint Base Lewis-McChord, near Tacoma, that the Army has accused of being involved in the murders of at least three civilians in Afghanistan between January and May. Details have emerged about rampant drug use in Winfield's platoon of around 30 soldiers, and of troops posing for photos with corpses. Soldiers in the unit say the alleged ringleader in the murders, Staff Sgt. Calvin Gibbs, severed and collected body parts, including teeth and fingers, apparently to make a necklace. Members of the platoon allegedly used drop weapons to cover up their crimes.

It's too early to blame what occurred in Winfield's platoon on soldiers' moral compasses spinning out of control after repeated, violent tours in Iraq and Afghanistan (Gibbs was on his third combat tour). But it is easy to imagine that seemingly endless wars contributed to the moral turpitude Winfield described to his father.

"There are no more good men left here," Winfield wrote in the Feb. 14 exchange released to Salon by Chris Winfield through his attorney, Neal Puckett. At one point, Winfield seemed to echo Sen. John Kerry's haunting 1971 testimony about Vietnam when Kerry asked rhetorically, "How do you ask a man to be the last man to die for a mistake?"

"I started to think whether I should quit and just give up because it’s stupid to get smoked in Afghanistan," Winfield wrote. "The Army really let me down when I thought I would come out here to do good maybe make some change in this country I find out that its all a lie (sic)."

Winfield said he raised concern about the January murder with someone there, but received a blasé response. "Well I talked to someone and they told me this stuff happens all the time and that when we get back there is always someone that spills the beans so it normally works its way out," he wrote.

Winfield claimed he gave up his position in the platoon as a team leader because of the murder. "I stepped down I cannot be a leader in a platoon that allows this to happen," he wrote.

In the correspondence from Feb. 14 Adam's father, Chris, expressed shock at the indifference to the killing. "No one else thought it was wrong?" he asked his son. "No," Adam wrote back. "Everyone just wants to kill people at any cost they don't care the Army is full of a bunch of scumbags I realized."

Adam Winfield also wrote that he feared for his own safety if he reported the murder, harkening back to the fragging incidents in Vietnam. "Pretty much the whole platoon knows about it," Winfield wrote about the January killing. "It's okay with all of them pretty much. Except me," he added. "I want to do something about it the only problem is I don't feel safe here telling anyone."

Chris Winfield has said that he made multiple calls to the Army (including at least four to various offices at Fort Lewis) in an effort to report the murder his son described to him. On Friday, the Army announced that it is investigating this claim.

Winfield's phone records, reviewed by Salon, show phone calls to those numbers taking place between 3:43 p.m. and 4:18 p.m. on Feb. 14. Mostly, Winfield says, he left messages, though he also talked to a sergeant in his son's unit's office. "I said my son is in [Stryker Brigade] and he told me there is a rogue sergeant over there committing murders," Winfield told Salon. "I was pretty upset. I was frantic."

He said nobody ever got back to him. Members of his son's platoon allegedly committed at least two more murders in the months that followed. The Army has now implicated Adam Winfield in one of those later killings.

"The Army had the opportunity and they dropped the ball," Chris Winfield said. "The Army has the blood on their hands on those two [later] murders. They want to sweep it under the carpet and make it disappear," he claimed. "I'm not going to let them do that."

The Army is not commenting on the cases.