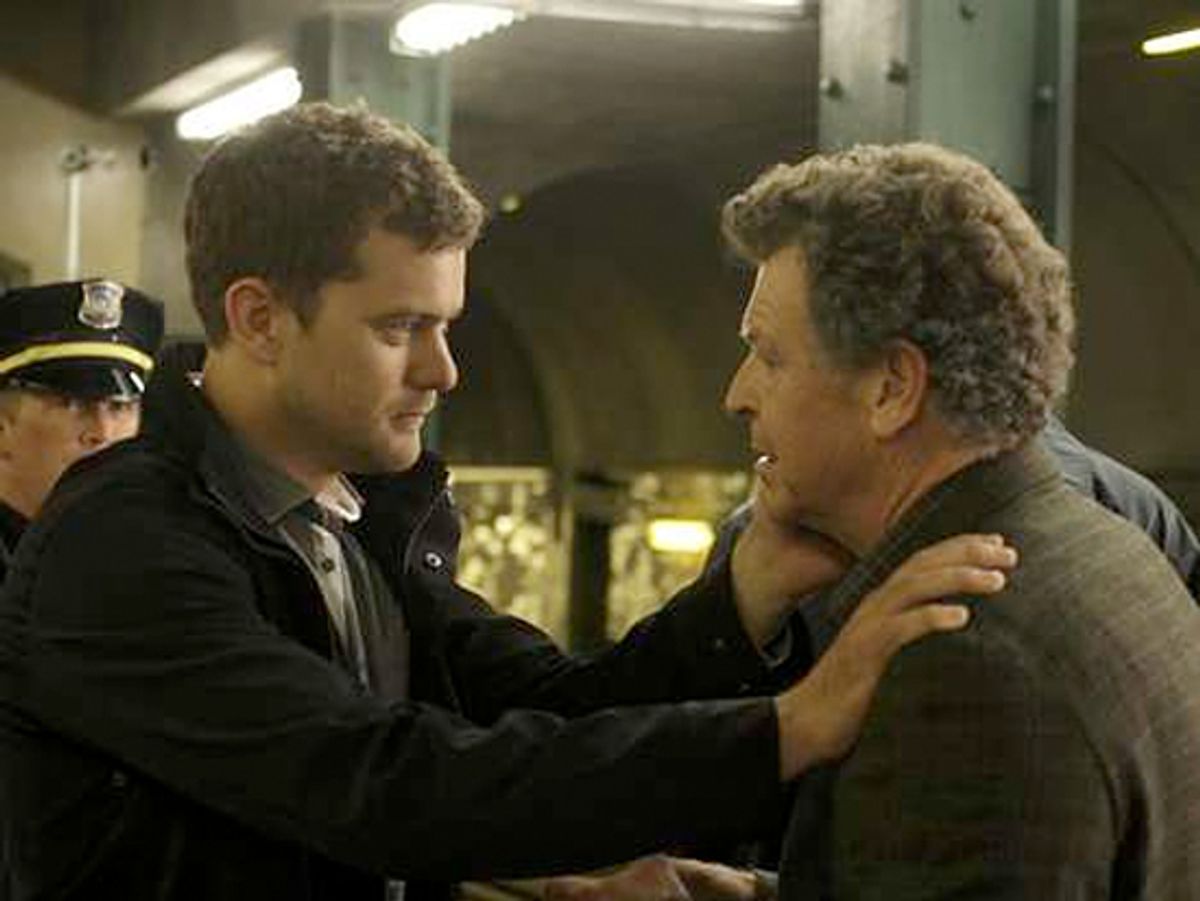 This week on "Fringe," boxes feature heavily into the plot. There's the box tied to the main plot -- an ugly thing that looks like a rejected prop from the "Stargate series," and causes some pretty gruesome nose bleeds and brain explosions when opened. Then there's the safety deposit box that William Bell left Walter Bishop in his will. Both boxes have world altering properties -- the former is one of the missing components to Walternate's Peter-powered universe destroyer, and the latter contains every single share of Massive Dynamics stock. In other words, Walter is now the sole owner of the company. I can't wait to see the look on Nina Sharp's face when she finds out.

Alt-livia has gotten together with Thomas Newton, who you may recall was the frozen head the mercury-powered hybrids were seeking out back in season 2. Newton removes Alt-livia's ugly neck tattoo with this really nifty laser gun (and boy if they had those over here, you can bet there'd be approximately 40 percent fewer tramp stamps out in the world). Alt-livia thanks him by getting all bossy and asserting her place as top dog on the Earth 1 mission. Newton doesn't look thrilled by the young whippersnapper usurping his authority, but for now he just equips her with a bunch of personnel files on the Earth 1 "Fringe" Team and a tome of pop culture. Fun Earth 2 fact: They have Patsy Cline but no Bono. This... does not upset me much.

They discuss the brain-exploding box seen being dug up by the gang of thugs in the cold open, and it's revealed that Newton was the one who hired them in the first place. Alt-livia is not pleased, as the box has gone missing. She berates Newton for a bit, before flouncing off to go mess with the "Fringe" team's heads some more.

Broyles and the team discuss the Peter-powered universe destroyer machine. Broyles wants to learn more about the machine, but Walter, clearly bothered by the destruction he witnessed in Earth 2, wants to just let sleeping dogs lie. Peter may not be back on very friendly terms with Walter yet, but he does voice his support for Walter's position, before heading off to a bar with Alt-livia in tow.

Alt-livia clearly didn't get the memo that Earth 1's Olivia Dunham is a no-fun wet blanket, because she smiles just a little too much and flirts just a little too aggressively with Peter. Peter seems to realize something is off, but hey... you can't really blame the guy for figuring that when your girlfriend suddenly likes normal things like listening to Patsy Cline songs and slow dancing, you shouldn't look that gift horse in the mouth. (I do not approve of Alt-livia's methods, but I will agree with her that "Crazy" is a great song.) Alt-livia uses her feminine wiles to plant a seed in Peter's subconscious that maybe he DOES just want to study the universe destroyer design diagrams some more. You know... for science and whatnot. This gross moment is thankfully interrupted as they are contacted by Broyles to go deal with the brain explosion situation at the house where the box was first seen.

The next day after investigating the crime scene, the team has split up. Peter and Walter are off to Massive Dynamics for the reading of William Bell's will, Alt-livia is off snooping around for clues at one of the thug's apartments, and Astrid is back in whatever box they store her in when she's not delivering lines of exposition. After a hilarious scene involving Walter bear hugging Nina Sharp, Peter finds out from Broyles that Alt-livia is in the field investigating without him and heads off to find out what's up. Meanwhile, the third thug from the cold open has spotted Alt-livia and apparently plans to follow her.

We jump back to the lab. While fondling the victims' brains with Astrid in the lab, Walter is suddenly struck by inspiration and realizes how the MacGuffin works. He goes on to demonstrates how harmonic music like Mozart's Marriage of Figaro calms brain waves, while other kinds of music make the brain waves go crazy. So, in short: The "Miami Vice" theme will make your head explode. This comes as no surprise to me. What does surprise me is that the writers stoop to using the phrase "Silent, but deadly," just so they can set up Walter for the easy fart joke. Boo, show. I know you're better than that.

Alt-livia is back in her apartment, studying Olivia's mannerisms and reviewing her personnel file. Apparently Alt-livia doesn't have a photographic memory like Olivia -- I thought that that would be a genetic thing, but it's possible that Olivia's ability is tied into the Cortexiphan trials somehow. In any case, the third thug shows up toting the box, and Alt-livia promptly murders the poor deaf bastard.

She might be great at marksmanship, but Alt-livia is just the worst criminal mind ever. Why would you shoot someone in the head in your kitchen, when you've got a perfectly good tub in the other room where you could do your execution? Stupid and messy. Maybe I'm just spoiled by Dexter Morgan with his nice clean plastic sheets.

Minutes after getting blood everywhere in her kitchen (enjoying picking those brain particles out of your cereal bowl, you psycho?), Alt-livia is interrupted by Peter's arrival. Again, instead of pretending she's not home, or making up some excuse to get rid of him, she just lets him into her apartment, even though she's just stashed the thug's body in her bathroom. Worse, she answers the door in a tank top and she's all wet, which... that is no way to get rid of a man quickly, hon. Alt-livia's next brilliant move is to sex up Peter on the couch -- because that's a good way to make sure he doesn't want to leave at ALL that night. What exactly is Alt-livia's plan here? Just thrust her boobs in his face every time he starts to turn towards the bathroom, where blood is now seeping out from under the door?

Luckily for Alt-livia, Newton has been busy unleashing the box on some poor unsuspecting souls in a subway station downtown, so before it gets too far or Peter has to use the bathroom or whatever, their cell phones go off. She and Peter hustle off to go help. There's a bit of fake tension involving Peter defusing the sonic bomb in the box and a runaway train, but honestly... the show isn't about to kill off Joshua Jackson, so we're all pretty sure Alt-livia will save him at the last possible moment. She does and we find out at the end of the episode that this was all one long con set up by Walternate and Alt-livia to pique Peter's curiosity enough so that he ends up working on the universe destroyer machine after all. With Peter actively engaged, Walternate sends Alt-livia her next objective: some kind of similar mind game with the new owner of Massive Dynamics, Walter Bishop. Dun dun!

This week's episode was chock full of good stuff. We get some more fun nuggets about how Earth 2 differs from Earth 1. Astrid actually had a few quality moments -- she's best on the show when she's serving as Walter's confidant, and this week she pushes him to explain his version of the Peter-napping story to his not-son. Perhaps Peter may yet forgive Walter for his actions in the past. Most interestingly, we now have Walter with the full force of Massive Dynamics technology and money at his disposal. Will Walter be tempted to cross the metaphorical line that William Bell wanted him to? Will Nina Sharp's relationship and support of the team change now that Walter is in charge? Will the "Fringe" team upgrade their lab? Most importantly, will Walter have the Massive Dynamics scientists busy genetically engineering cows that produce chocolate milk? These are all things that make me excited to see the next episode.

Summary: Your Bose headphones cannot protect you from the awesome sonic power of "The Box."