Snooki is just the latest in a legacy that includes Naomi Campbell and Lynne Cheney, and we have the excerpts 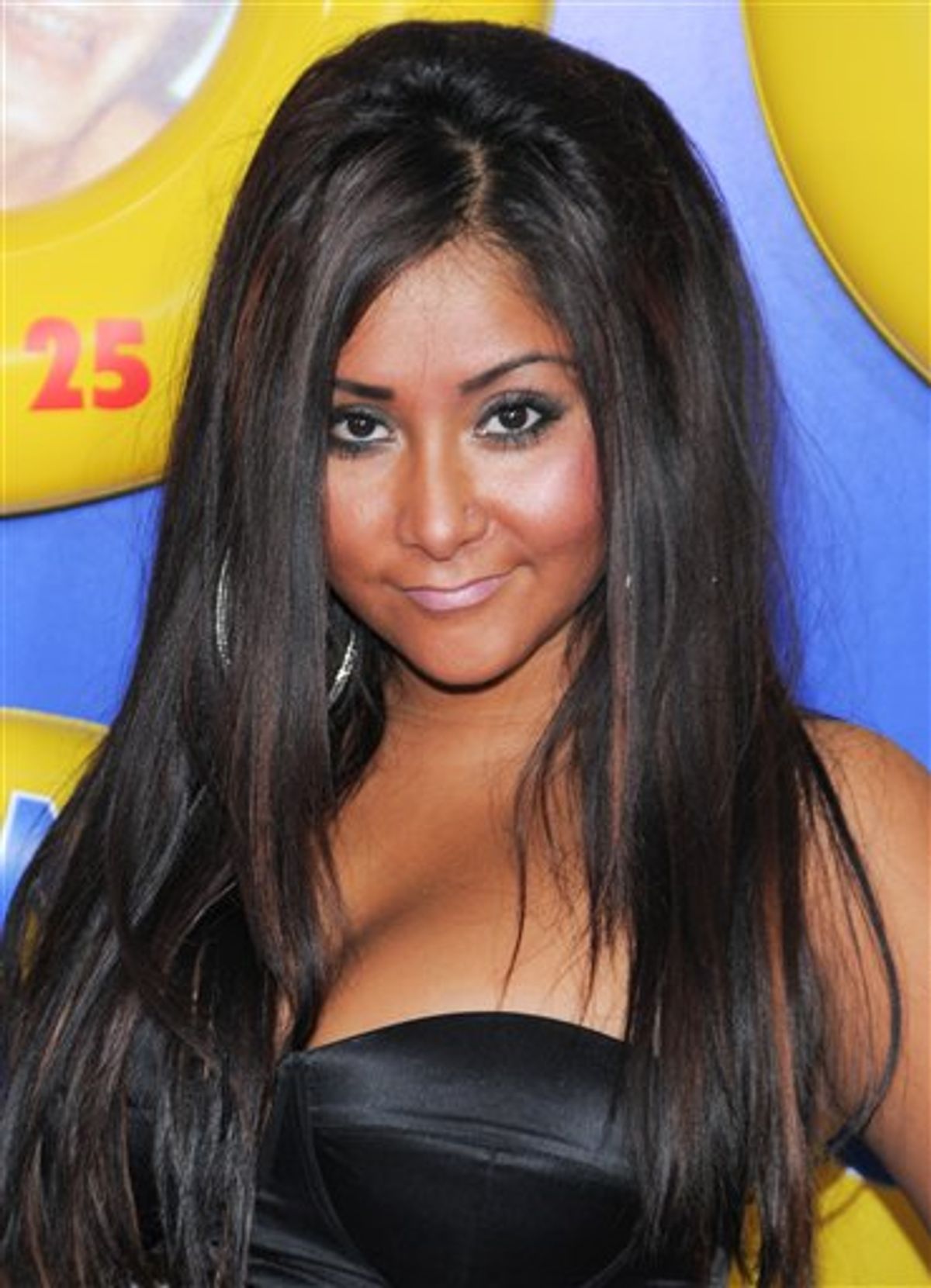 News that "Jersey Shore" star Snooki will soon join the literati came packed with excitement, especially her own. "I'm pumped," she said in announcing "A Shore Thing," the tentative title of her romance novel, due out early next year. But it's not the first first-pumping a celebrity has given to the world of letters. Any public figure can write a memoir, but it takes a special daring to jump into the realm of fiction. Here are 10 of the most memorable attempts.

If any corner of American culture needed an exposé less than Hollywood nightlife, we couldn't think of it. Still, the celebutante's 2005 novel was called "shockingly entertaining" by the New York Post. And why not with prose such as, "The nightclubs of L.A. are like soap operas, except they're not Days of Our Lives; they're more like Passions -- crazy stuff happens, and no one bats a fake eyelash."

North was no stranger to creating fictions, so why not pen a thriller with a Christian moral and references to actual Oliver North? Ah, those post-modernists. "Behind the cluttered desk was a watercolor of uncertain origin, depicting only what could be the grisly violence of General George Armstrong Custer's final moments at the Little Big Horn. The National Security Advisor looked up to see Newman staring at the painting. 'It's by a Native American artist. … I put this one here to remind all you green- and blue-suit types how stupid and costly military operations can be.'"

Forget "The Hills." Conrad says writing "was always my best subject in school, and it's something I've always loved to do." Despite insinuations there's a ghostwriter, Conrad swears she wrote the following: "Jane jumped out of bed and slammed the door behind him. She had to take a shower, like, immediately. Who knew how long he had been in her bed, polluting it with Old Spice and man sweat."

The actor and director cooked up the idea of a pirate potboiler set on the China Seas. Brando talked, Cammel wrote and then they both gave up. Only death, of both men, could have made this book publishable. "Thick-chested, thick thumbs and eyebrows, thick tendons of the wrist and below the kneecap and at the insertion of the hamstring, a valuable asset for a violent man a little past the years of youthful resilience when being thrown out of bars and down companion ladders were just laughable excursions. Thick-bearded he was, too."

Making home movies isn't the "Baywatch" babe's only hobby. In "Star," she tells the tale of a cosmetologist discovered by a marketing executive who becomes a Playboy centerfold. Hmmm. "Like school, for example. She may have been the brightest, but she was far more likely to be called on for cutting up in class than giving the correct answer. Only her mom knew about the straight A's. … Star never told."

A peek into the world of modeling, and the Czechoslovakian-born Swedish-American model actually wrote it. Even though the book was generally dismissed for plot reasons, Porizkova got credit for being literate. "I take my book out of my backpack: Kafka's 'Castle.' My father's only comment about my summer plans was to voice his fear that my IQ would shrink to my bra size."

The "Dynasty" actress and shoulder pad aficionado now boasts six novels, but it began with this saga of an Irish girl's quest for fame on the stage. And speaking of sagas, enjoy this sentence: "Another maid, Patsy, even younger than Millie, with beautiful bronze hair and an angular but pretty face, stared at Milly coldly while the rest of her staff let out sycophantic giggles at Mr. Kingsley's attempt at wit."

Culkin wins for perhaps the most vitriolic Publishers Weekly review: "This self-indulgently infantile book is a novel in only the loosest sense." Culkin might agree, if his introduction is an indication. "I want to make one thing clear before we begin: I am not a writer. I couldn't possibly be a writer. I have written and rewritten the words 'Introduction' or 'The Introduction' so many times in the past couple of years that I'm convinced I was not born to do this. Writing could not be my calling after the mess I've made of all this." Perhaps.

Give Cheney credit for spurning polls. Her husband was a conservative congressman from Wyoming when Cheney wrote the story of a woman who discovers her sister's secret lesbian love affair … in 1886 Wyoming. "The women who embraced in the wagon were Adam and Eve on a dark cathedral stage -- no, Eve and Eve, loving one another as they would not be able to once they ate of the fruit and knew themselves as they truly were. She felt curiously moved, curiously envious of them."

Behind every swan is an ugly duckling and this tale of a supermodel being blackmailed is no different. Campbell later admitted someone else did the work here – a decision she didn't make, unfortunately, for her debut album which appeared the same year. "I just did not have time to sit down and write a book."