Sportswriters slam the superstar for stating the obvious: Race played a role in the backlash against "The Decision" 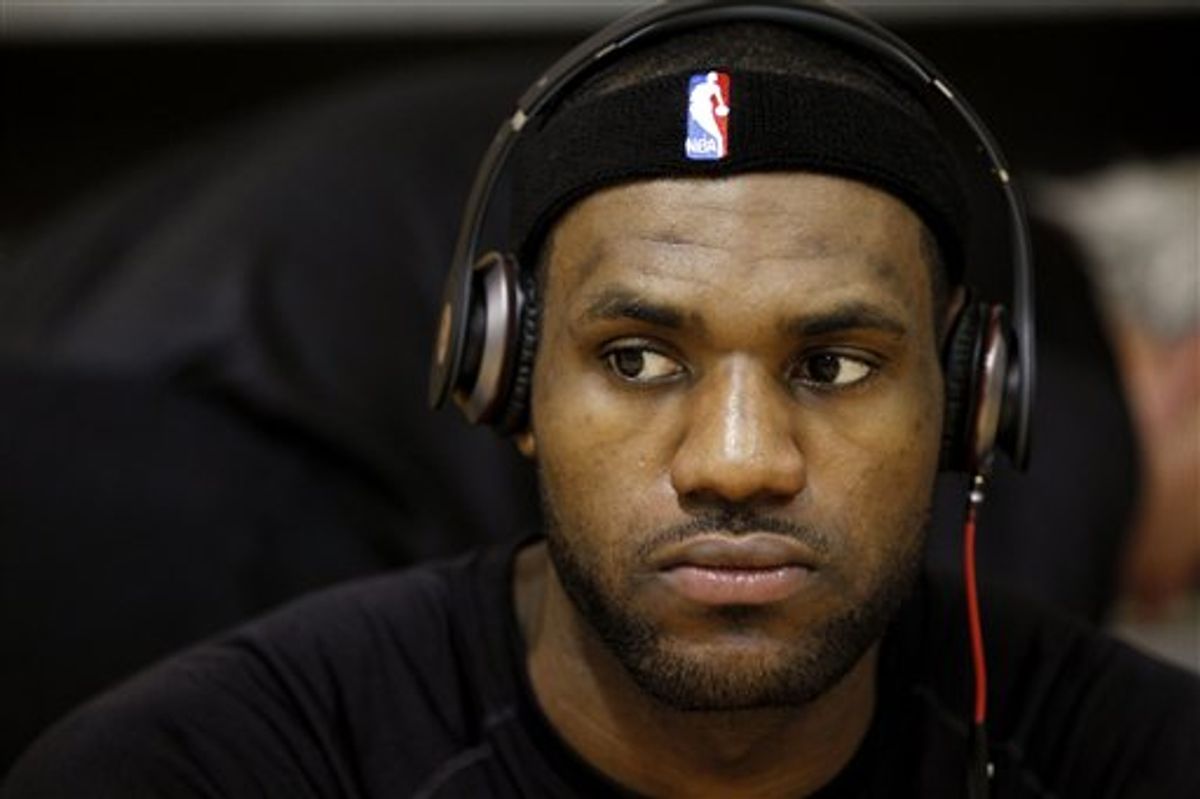 As some may remember, LeBron James left one team for another in a move that enraged the masses. It led to criticism, torrents of rage, mob jersey burnings, and the "runaway slave" imbroglio. But race never plays a role in large emotional sociological events -- just as sarcasm never plays a role in this sentence. And now we have an aftershock controversy, stemming from LeBron's obvious answer to a yes/no question last night on CNN. Soledad O'Brien asked James:

O'BRIEN (on camera): Do you think there's a role that race plays in this?

JAMES: I think so at times. It's always, you know, a race factor.

Shaun Powell of NBA.com: "My advice for LeBron? Don't cite race anymore, unless you can give examples or prove you possess the power to look into someone's soul, because the (white) fan doesn't want to hear it."

Mike Bianchi of the Orlando Sentinel: "I'm going to call B.S. on this. I believe the negative reaction toward LeBron was based on grace, not race."

Of the pitchfork shakers, Fox Sports' Mark Kriegel also has the shiniest torch. From a column ominously titled "Playing Race Card Won't Help LeBron": "Race had a role? Stories and columns were race-based, or somehow racist? For real? Prove it. Go ahead. Show me. Show the world. Which things that were written? By whom? Why? How are they about race?"

You. Writing this. You. Idiot.

"I'm not arguing that James will end up in jail or rehab."

"I can't imagine he has those kinds of pathologies in him."

Continued white benevolence, practically a pat on the head.

"Besides, there are too many people and corporations with huge financial stakes in keeping him on the court."

Whoa, you're so tolerant to think this non-criminal a future non-criminal. Or perhaps a coverup would occur? Anyway, I'm throwing my race card with a Magic nerd's fury -- it might even give George F. Will purple skin. Mark, you're a hateful white guy, the kind who wants to yell at successful black guys twice. Once for the first offense, twice for daring to question -- or is it reveal -- your anger attribution.

We've seen this scenario play out a million times, a million different ways:

Aggrieved White Guy: Oh, so now I'm a RACIST because I feel this way?

Reasonable Guy: No, I'm just saying that many other people have reached your conclusion for reasons rooted in racial resentment. I'm not saying anything about --

Aggrieved White Guy (spittle flying): So I'm a RACIST, huh? Well maybe this BLACK GUY just happens to be a jerk! And I spend all my waking hours talking about him because he's THAT much of a jerk!

Aggrieved White Guy: Look I'm just saying Tiger, Kanye and LeBron should be thanking US, for giving them the opportunity to entertain US! And it makes me SICK that they don't act properly grateful, then people like YOU protect them because they're BLACK! RACE CARD! RACE CARD! RACE CARD!

Now, the Aggrieved White Guy funnels rage to the comment boards, as LeBron is shredded for this latest transgression of truth. While many pundits white and black want to pretend that ego alone stoked this bubbling hate cauldron, Henry Abbott, who presides over ESPN's network of NBA blogs, noticed a unique phenomenon:

"It is literally the strangest thing I have ever seen NBA fans do. If you look at most NBA stories online, there will be some comments on each that are either racist, coded racism, or in line with racist thinking. On the night of LeBron's decision, those kinds of hateful comments -- whether hateful or not -- became the dominant narrative, which blew my mind."

Fans were uniquely angry at James for showing up a mostly white NBA power structure. His race played a role, how could it not? And if you're still mad at LeBron, if you're screaming at him for pointing this out, I don't think his "ego" is what irks you.

Abbott: "Millions of people hate him. How many of them are motivated at least in part by the color of his skin? It would be bizarre to assume it's zero."

And yet so many shouters are indulging the bizarre fantasy.