In the debate over who should pay how much, we put far too much emphasis on the word "deserve" 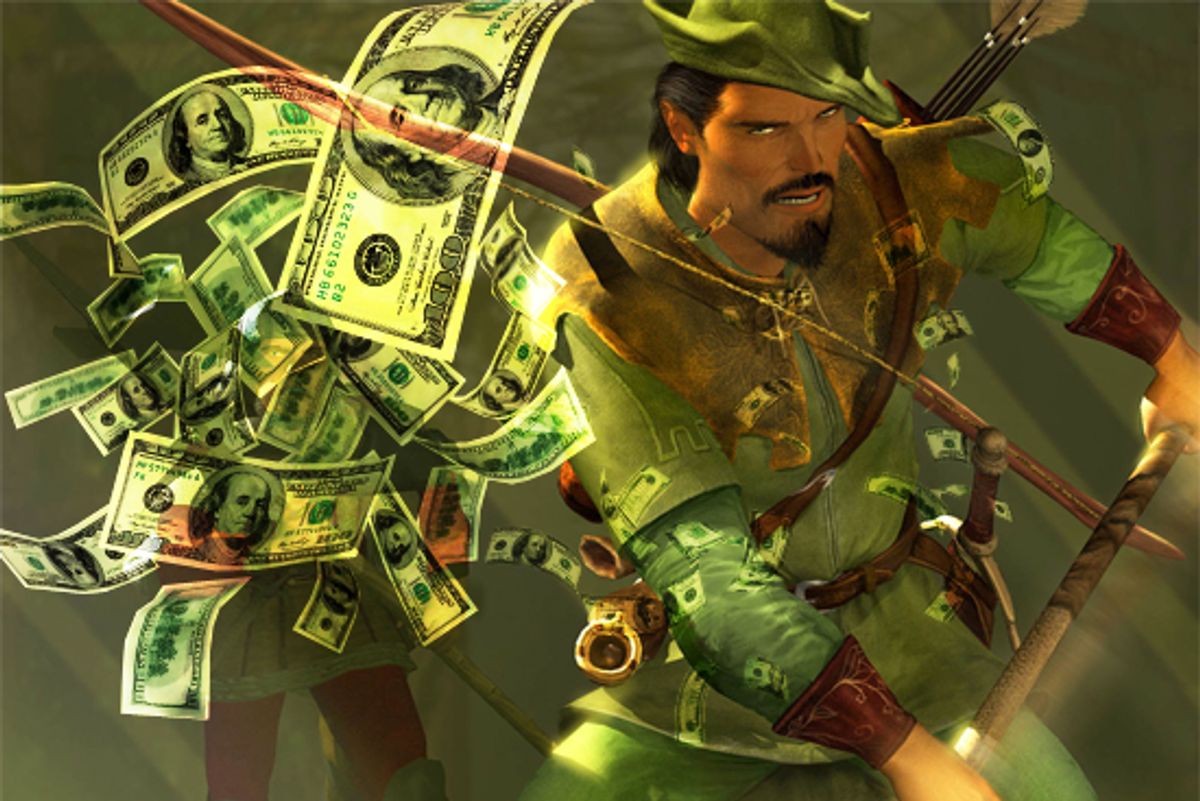 Although conservatives generally make the case for specific tax cuts in economic terms, mainstream American conservatism very clearly has a strong moral commitment to keeping taxes as low as they can. You can see this in the Tea Party’s equating of progressive income taxes with "socialism" and "tyranny," and you can see it in Fox News’ Stuart Varney’s on-air tantrum from earlier this week. Sure, the right will rend their garments over the Laffer curve and supply-side economics, but there’s a much simpler argument hiding behind the line graphs.

It goes like this: We earned this money. We deserve it. It is therefore immoral to take it from us.

The standard liberal response is to quibble over who deserves what. Does a single mother who works three jobs just to make the rent and keep her kids clothed deserve more or less material wealth than the overworked corporate lawyer who’s barely seen his downtown Manhattan studio in the past week? What about the linebacker who is paid millions of dollars to be in peak physical condition all the time and perform under immense emotional and physical pressure? Does he deserve all of his income more than the recently laid off factory worker deserves his unemployment benefits?

The problem with questions like this is that they put far more moral weight on the word "deserve" than its shaky frame can support. This becomes clear once you ask why a billionaire does or does not deserve a tax cut. He does deserve it because he’s a diligent, hard worker. He doesn’t deserve it because his money came to him in large part thanks to a combination of luck and privilege.

So the question of "deserves" comes down to whether the money came to the billionaire by way of arbitrary factors or as a result of his own efforts and character. And implicit in the argument is the understanding that the difference between these two categories is somehow intelligible, even quantifiable.

But that’s silly. As the political philosopher John Rawls famously pointed out, factors that we associate with character -- such as intelligence and a diligent work ethic -- are no less morally arbitrary than factors like inherited wealth or membership in a privileged identity group. If Jane deserves more money than her co-worker Bob because she is naturally smarter and harder working than him, what did she do to deserve her greater intelligence? What about the solid work ethic her parents instilled in her? Did she, at the exact moment of her birth, already deserve better parents than Bob?

The only thing this debate about who deserves what really tells us is that very few people are willing to admit just how insubstantial and malleable our innate character really is. When you control for environmental, genetic, social, historical, and biological factors, what differentiates my own distinguishing features from Charles Manson’s -- or, for that matter, Obama’s, Palin’s, Lincoln’s or yours -- is either imperceptible or completely nonexistent. And if that’s the case, I don’t see how you can argue that either of us deserve more or less than any of those people.

What this suggests to me is that the only way you can coherently argue that a person inherently deserves a certain level of privilege or material comfort is to also argue that all persons deserve it, by virtue of their personhood. We already have language to describe these things that all persons innately deserve: we call them rights.

Beyond rights is where the language of "deserving" falls apart as a morally relevant factor. There are, of course, other morally relevant factors: ownership comes to mind, but nearly everyone, when pressed, will admit that ownership doesn’t carry a great deal of moral weight. (Example: If I need to steal your expensive racing kayak to row out to sea and rescue a drowning child, are you really going to argue that I was behaving badly?) Mostly it falls back to a question of economics: how to balance the state’s ability to provide needed services for all citizens, including its most needy, while preserving a capitalist system which rewards achievement, and therefore (one would hope) innovation, productivity and excellence.