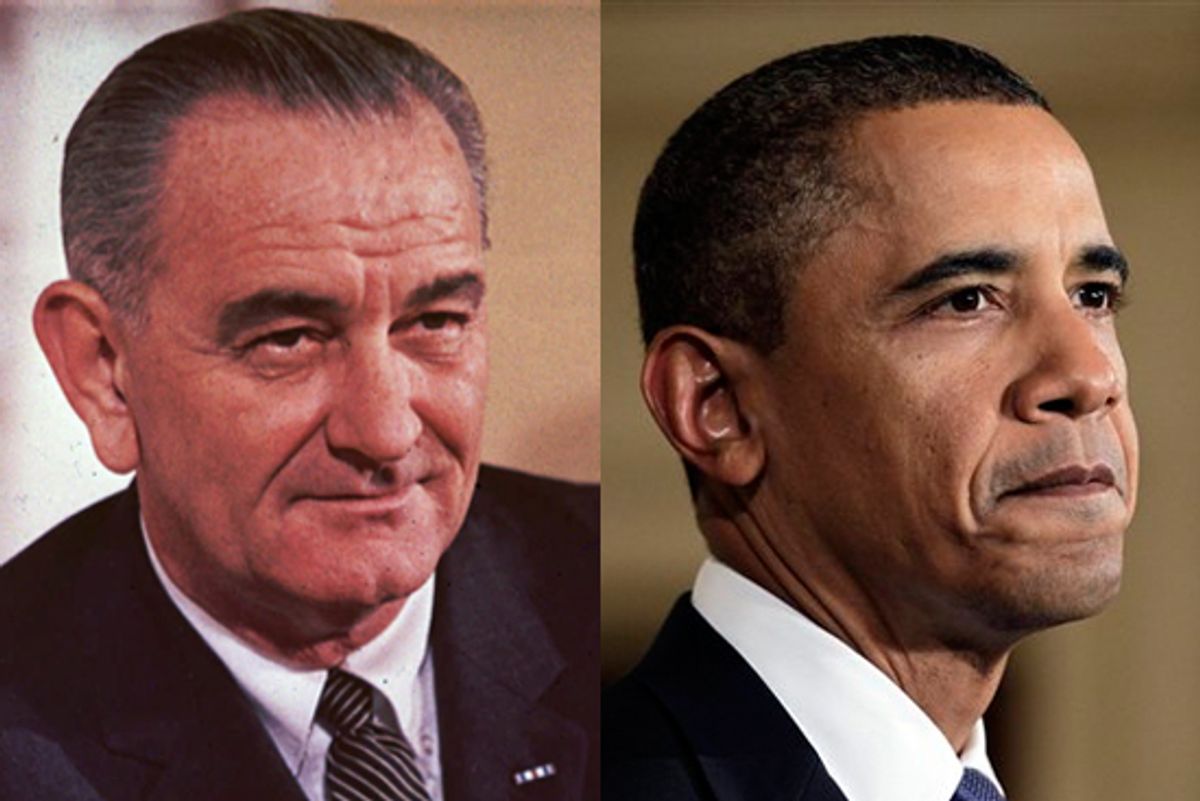 Scoff all you like at Gallup's new Barack Obama vs. Hillary Clinton head-to-head poll, in which the president leads his secretary of state among Democrats, 52 to 37 percent. Big deal. The numbers aren't bad for Hillary, but her political army is completely demobilized, if not folded into the Obama corps.

Of course, it's easy to think this now. But imagine if she had stayed in the Senate? One doesn't have to wonder too hard: there's a close enough comparison in Lyndon Johnson and Robert Kennedy.

It's nearly forgotten that Lyndon Johnson had the opportunity to put Robert Kennedy on the leash without making him vice president. In the spring of 1964, Attorney General Kennedy offered to go to Vietnam -- as ambassador, special envoy, you name it. "I'm tired of chasing people," he told students at the University of Virginia Law School. He wanted something to do with foreign policy.

Johnson, who had assumed the presidency the previous November, turned him down, for three reasons: he needed him at the Justice Department for the Civil Rights bill; he didn't want to look like he was shipping off one of the most prominent figures in the Democratic Party before he had picked a vice presidential nominee; and, perhaps most of all, it was a war zone and the nation just couldn't take another dead Kennedy.

Soon after, the president would offer RFK the ambassadorship of his choosing ("Paris, London or Moscow"), but that wasn't the kind of foreign service Kennedy was looking for. Still, had Johnson done like Obama and offered up the State Department, RFK would've had a hard time turning it down, especially since his brother had planned to can Dean Rusk in a second term (an observation Arthur Schlesinger was all too happy to report at the end of 1965's "A Thousand Days").

Alas, President Johnson didn't muzzle Kennedy, and he suffered dearly for it. In the fall of '64, Kennedy was elected to the Senate from New York, and by roughly this point in LBJ's first full term -- August of 1966 -- Gallup found RFK defeating the president with Democrats, 40 to 38 percent. (With independents, the spread was 38 to 24 percent.) Similar polls would follow, not to mention the handful of statewide polls further enforcing Kennedy's image as America's most popular Democrat.

That pollsters routinely conducted these surveys showed just what a political force RFK remained, and surely weighed heavily on the president’s mind. At a July 5 press conference, LBJ found himself rattling off his state-by-state favorability ratings -- from memory.

As the junior senator from New York, Kennedy had the platform and independence to put his finger on Johnson's pressure point: Vietnam. (Hey, he told him he wanted to do something in foreign policy.) Now, imagine Senator Clinton rolling out her prescription for the weak economy today.

What do you think she'd be polling then?