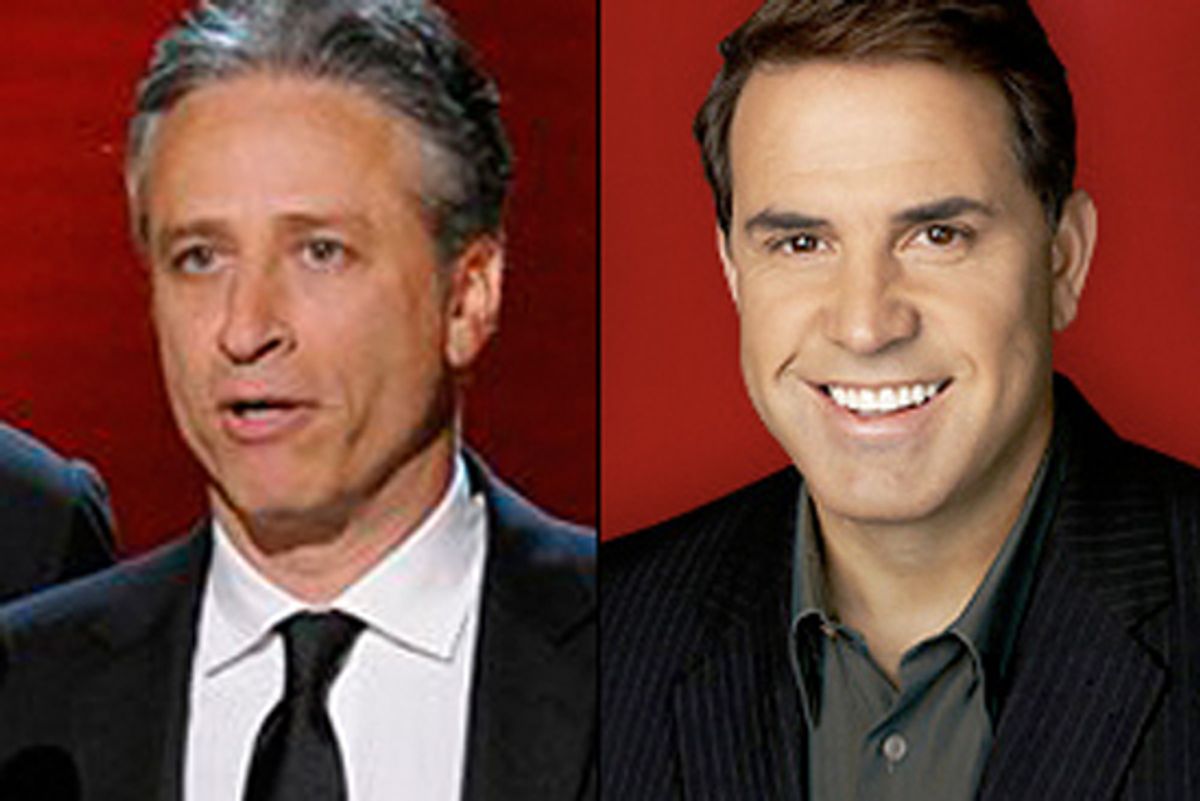 Rick Sanchez is the perfect anchor for CNN. He's so stupid that they need never worry about him coming to some sort of conclusion about any raging debate. He's Wolf Blitzer as former jock. Although unlike Wolf Blitzer, he apparently has some sort of problem with the Jews.

And now he will probably lose his job. Not solely because he is a very dumb person. But because his dumbness led him to go on a very ill-advised self-pitying rant on the radio, in which he complained that Jon Stewart hates him because Stewart is a "bigot," that Jews control the media, and that Sanchez is being discriminated against because he's Hispanic.

His real complaint is that nerds and smart kids look down on him, because they think he's dumb -- it was a very ill-advised attempt at making that complaint sound serious that led him to make it about ethnicity. Then he just kept digging.

In the middle of his presumably career-ending rant, Sanchez said something that could serve as CNN's mission statement: "If we’re gonna call one side bigoted, we probably gotta look at the other side and say the same thing."

A formerly working-class immigrant has, of course, all the reason in the world to resent wealthy East Coast elites from fancy colleges who get all the breaks. There obviously exists a sort of comfortable racism among the liberal elites, born of privilege, inculcated in lily-white private schools. Rick Sanchez has almost certainly experienced discrimination, or been underestimated, because of his background. But Jon Stewart -- along with, for that matter, the Jews -- is not really "the real enemy." (I mean, first of all, Rick, surely growing up Jewish in Central Jersey teaches you about as much about adversity as growing up Cuban-American in mostly Hispanic Hialeah, Fla. ...) (Oh, and he gets a shot in at Stephen Colbert, who is Catholic and from the South. Rick's just a little confused about who is prejudiced against him, and why.) And this sort of talk, oy:

Very powerless people… [snickers] He’s such a minority, I mean, you know [sarcastically]… Please, what are you kidding? … I’m telling you that everybody who runs CNN is a lot like Stewart, and a lot of people who run all the other networks are a lot like Stewart, and to imply that somehow they — the people in this country who are Jewish — are an oppressed minority? Yeah. [sarcastically]

Is it really anti-Semitic to resent Jews for being so much smarter than you? Well, yes. But Rick Sanchez is a man who says things without thinking -- like Blitzer, he is a professional sayer-of-words, not understander-of-words -- and I think his heart is filled less with hate than with intense resentment and nagging inadequacy. He is a dumb, shouty guy who has gone about as far in life as a dumb, shouty guy can get, through sheer, admirable hard work -- ever since he parlayed a football scholarship into a communications degree -- but the nerds, they're still laughing at him.

And with good reason! The man should not be an anchor. I mean, here's Rick yesterday, calling "bullying" -- bullying! -- "a psycho-babble, media term that we've made up." Thinking Rick Sanchez is a moron isn't even a partisan issue: Glenn Beck called him the dumbest man on television in August.

Here's Stewart on Sanchez's famously horrific coverage of a tsunami that looked to be headed for Hawaii:

Here's another clip in which Stewart uses the magic of Sanchez's own words and actions to make Sanchez look stupid:

Sanchez will not be on CNN today because of a "book signing."