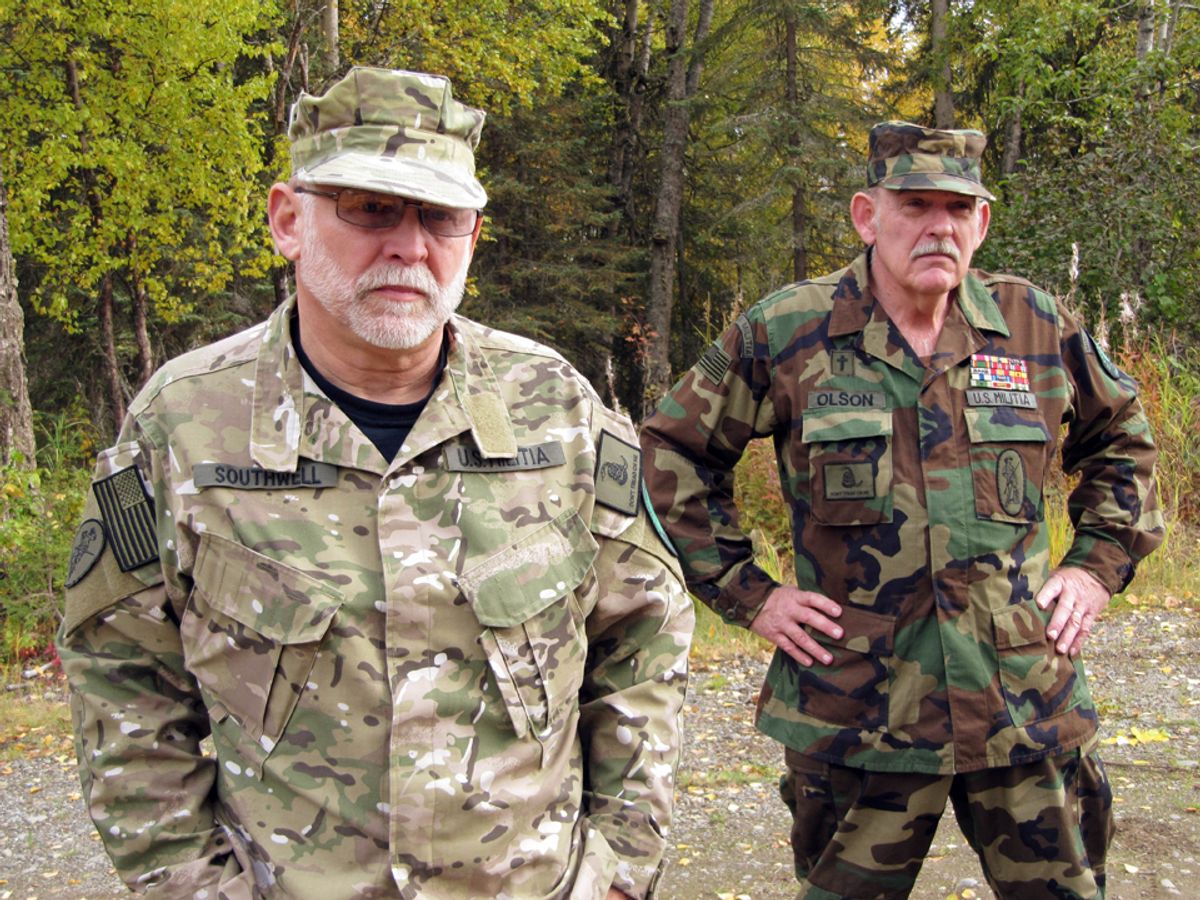 **ADVANCE FOR WEEKEND EDITIONS, NOV. 21-22** In this photo taken Tuesday Sept. 29, 2009, Ray Southwell, left, and Norm Olson, members of the Alaska Citizens Militia stand by the woods near their home in Nikiski, Alaska. Olson's genial tone belies his reputation as a radical militiaman, yet here he is, at 63, an affable grandfather explaining why Americans should arm themselves against their government. Olson's militia is minuscule at the moment, but there has been a resurgence of the militia movement nationwide, in part coinciding with the advent of the Obama administration. (AP Photo/Rachel D'Oro) (Rachel D'oro)
--

When exploiting public fear of Islam, as so many Republicans have chosen to do in this election cycle, a favorite tactic is to treat "American Muslim" as a synonym for "homegrown terrorist." But the threat of jihadi attack is not the only form of violent extremism that worries law enforcement officials. According to an extensive investigation by Barton Gellman posted Thursday on the Time magazine website, they are deeply concerned about the growing prospect of violence from the far right.

Last spring, conservatives angrily denounced a Department of Homeland Security study of the violent potential of the revived militia movement as a political abuse by the Obama administration -- and forced DHS Secretary Janet Napolitano as well as the White House to back away from the report. But Gellman's reporting shows that top officials at the FBI and other agencies are in fact deeply concerned over that possibility. While they don't expect a mass militia assault on Washington or on federal officials in the countryside, they worry about what a deranged loner, armed and trained by a militia group, might do when he becomes impatient waiting for the right-wing revolution. As they listen to the furious rhetoric emanating from organizations such as the Ohio Defense Force, they search nervously for any sign of the next Timothy McVeigh.

A former Washington Post reporter who twice won the Pulitzer Prize, Gellman is now a senior fellow at New York University's Center for Law and Security, focusing on issues of domestic terrorism. His Time investigation reveals deeply troubling and previously unreported details of some recent incidents of right-wing terror, including neo-Nazi James von Brunn's assault on the Smithsonian in Washington and an attempted "dirty bomb" plot that almost came to fruition.

Gellman's sources say that von Brunn, who murdered security guard Stephen Tyrone Johns on June 10, 2009, with a rifle shot, was actually planning to kill White House political advisor David Axelrod -- a "seismic political event" that came close to occurring. Much as von Brunn hated the president, he viewed Axelrod, who is Jewish, as a symbol of the Jewish conspiracy he believed to be controlling Obama. Although federal officials never disclosed von Brunn's real plans, they quickly arranged a Secret Service detail for Axelrod.

Gellman also delves into the plot by a Maine-based neo-Nazi named James Cummings, who liked to dress up in a Gestapo trench coat, to detonate a device filled with deadly radioactive material using plastic explosive, in hopes of killing Obama before his inauguration. Unlike Jose Padilla, the Islamist and former Chicago gang member once accused of plotting to build a dirty bomb, Cummings actually had access to millions of dollars and significant amounts of thorium, cesium and uranium. He planned to bring a dirty bomb hidden in a motor home to Washington to kill Obama and perhaps hundreds of bystanders.

Fortunately for the president and the country, if not for his wife, Cummings was a chronic domestic abuser as well as an insane traitor. Tired of being beaten and threatened by him, she shot Cummings dead on Dec. 9, 2008, before he could execute his scheme.

Said a Maine police detective who investigated the shooting, and came to believe that Cummings could have mounted a major terrorist attack: "If she didn't do what she did, maybe we would know Mr. Cummings a lot better than we do right now."