The well-intentioned actor takes a teaching gig for a reality show, but his histrionics overshadow the real story 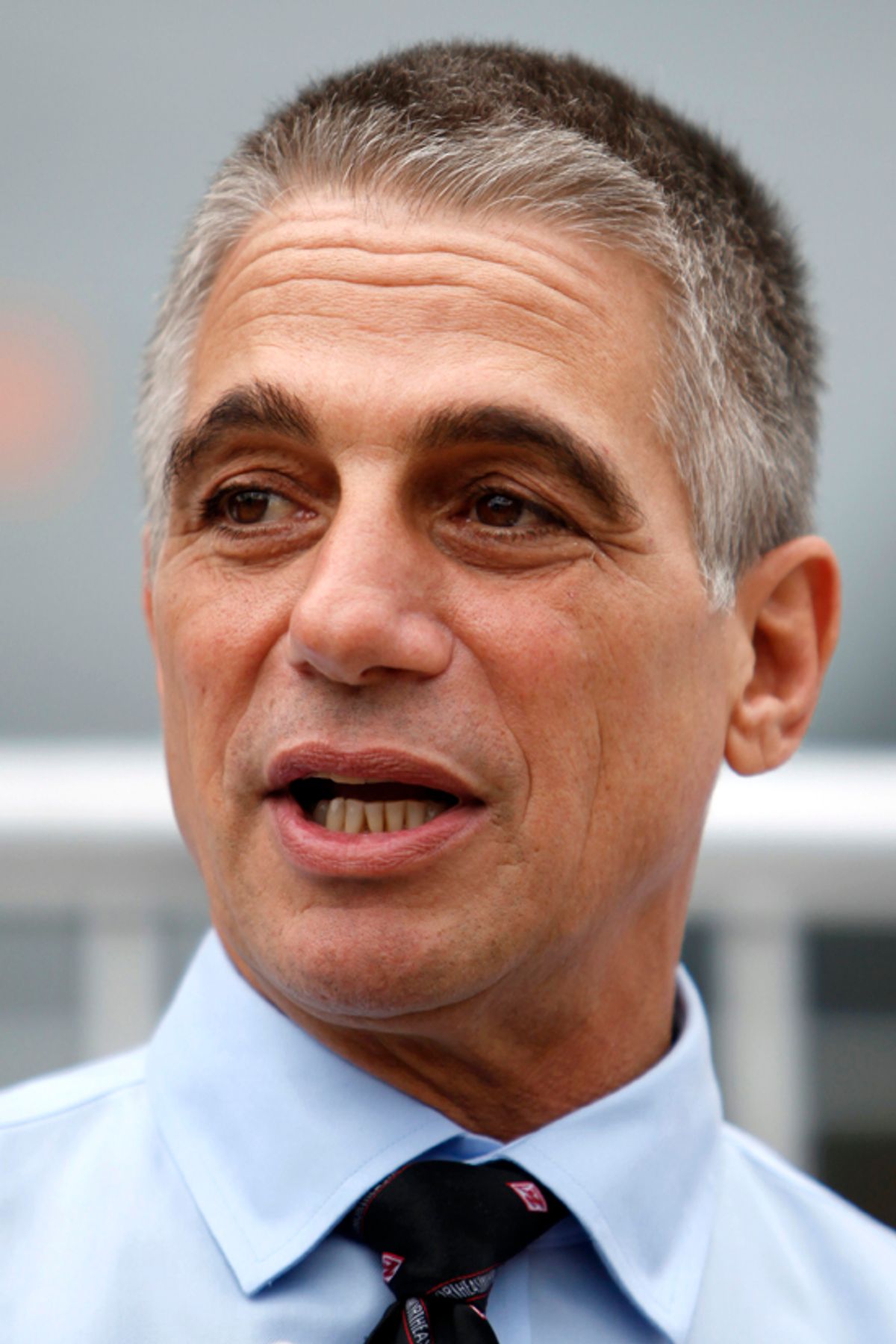 FILE - In this Sept. 18, 2009 file photo, actor Tony Danza makes remarks at a news conference to promote the Fallen Hero Tribute Concert in Philadelphia. When Danza began teaching English at a Philadelphia high school, no one really knew what to expect. Not even Danza. Certainly school officials were holding their breath after the district greenlighted "Teach," an A&E reality show premiering Friday, Oct. 1, 2010, that chronicles Danza's year at the head of a class. (AP Photo/Matt Rourke, File) (Matt Rourke)
--

At a time when public schools are on the ropes, teachers unions are less popular than LeBron James, and everyone is waiting for a Superman to save our floundering education system, one man has accepted the challenge. Unfortunately, that man is Tony Danza.

The 59-year-old actor brought his trademark mug -- and a few TV cameras -- to a year-long job teaching 10th-grade English at Northeast High School for an A&E reality show called "Teach" (Oct. 1, 10 p.m. EDT). The school is situated in a sprawling section of Philadelphia known locally as the Great Northeast, which houses both bombed-out buildings and manicured suburban lawns, with a mixture of not just black and white students but Asian and Russian immigrant populations as well. You can say Danza is guilty of naiveté or narcissism, but you can't say he doesn't try; he brings more showmanship to the classroom than the second-stage headliner at Harrah's in Atlantic City. Much of "Teach's" first seven episodes are devoted to Danza's efforts to become more involved in and out of the classroom: He tap-dances, he sings. He even cries. If he were a better actor, I might doubt his sincerity. But I've seen "Who's the Boss." He ain't that good.

I spent most of my 20s working with at-risk and incarcerated teens in Philadelphia, and while I wouldn't dare to call myself a teacher, I can only describe what I did as "teaching art." My job was relatively easy, since the expectations for my dropouts, reintegration cases and felons were so low that any meager accomplishments made in my classroom were met with resounding approval from funders and city officials. I'm not trying to take away anything from my former students -- some of whom accomplished amazing things in my classroom -- I only mean to point out that it was never me who deserved the credit, and ultimately, whatever they did achieve didn't matter in the face of a life sentence or the fact that they dropped out again before getting their GED. To say that I saw parallels between Danza and myself -- moonlighting in a world that demands real commitment, easily frustrated by what you discover in that world, and eventually reaping undeserved credit for any achievements made by others -- would be an understatement. All of which is a way of saying, I wanted to hate "Teach."

I didn't want to see complicated issues that led to my painfully smart students dropping out reduced to the insipid platitudes of "Dangerous Minds" and "Freedom Writers." I didn't want to see Tony Danza portrayed as the great white hope encouraging his students to rage against the dying of the light or some nonsense like that. I didn't want to see Tony Danza portrayed as a hero for showing up briefly and impersonating a teacher while the real teachers and administrators, who have dedicated their adult lives to bailing out the sinking ship of urban education, get portrayed as a lazy greedy horde by politicians and talking heads who know that because of systemic failures on state, local and federal levels (and yes, within the teachers unions themselves) teachers are left as the punching bags for a restless and frustrated population. Most teaching experiences don't end with a perfect graduation rate like that of Jaime Escalante in "Stand and Deliver" or with your classroom breaking into song, and I didn't want to see another program that tricked people into thinking it was the other way around.

That wasn't what I saw. Apparently I was suffering from the soft bigotry of low expectations for Tony Danza.

In "Teach," Danza often looks far from heroic. He bursts into tears after his teaching coach ever so gently busts his balls -- for breaking into tears. He's so culturally tone-deaf that he jokes about living in Malibu, expecting the Northeast High School football team to actually get what "living in Malibu" implies (I don't even get what that implies). His students rip on him for sweating too much and suggest that he should wear a double layer of undershirts. Actually, the kids rip on Danza about a lot of things, from his grasp of the material to his classroom management, to his crying. Danza comes off as socially awkward around the other teachers and the students. He insists on singing a birthday song of his own creation instead of just singing "Happy Birthday." It's weird.

But these gaffes feel surprisingly honest. Another less scrupulous reality show could have edited out these moments, or manipulated them to make Danza seem in control or valiantly struggling. Instead "Teach” lets it all hang out there like a desperate squirrel on a broken branch on a windy day. Danza looks neither valiant nor in control. He looks kind of silly and awkward. And as anyone who has ever stepped in front of a classroom of students for the first time knows, looking silly and feeling awkward are job requirements. Even Danza's insistence on performing his way through classes trying to keep the kids entertained rather than educated is a cringe-inducingly accurate portrayal of a common trap for young teachers.

It's oddly endearing, because for all of Tony Danza's classroom and social failings, I don't doubt his sincerity in wanting to do a good job. I also get the sense that he showed up every day ready to work, which strikes me as unusual in the pantheon of celebrity do-gooder reality shows.

But "Teach" also has terrible drawbacks. While most reality TV shows deliver their message with the subtlety of a hammer to the head, "Teach" seems unsure of its message, as though the show still doesn't know what it wants to be when it grows up.

Is it a call to service for baby boomers wondering what to do with their retirement? Maybe. Is it a show about the challenges facing first-year teachers? Probably. Is it a show about Tony Danza being a socially awkward weirdo and desperately trying to win over a skeptical group of 16-year-olds? Definitely.

Make no mistake that this is tangentially a show about teaching. But it's primarily a fish-out-of-water show about a person who's been given too much money, too much fame, too much attention, trying with all his might to do something good in the only way he knows how: with cameras, tap-dancing, overacting and catchphrases. As likable as Danza is, as central as his fame is to the premise, he is also the biggest roadblock to making a show with anything real to say.

If reality TV ever wanted to rise above being a mockery of its name, the students and the staff of teachers and administrators are the ones who would really be the stars of this show. They are beautiful and, in a bizarre twist, far more natural in front of the camera than Danza. They look and sound like actual humans. When Danza gets out of the way long enough, we catch glimpses of a big city high school and how it operates.

These don't appear to be educators ready for the rubber room. They aren't the greedy union horde. These people are professionals, real people who wake up every morning and try to help kids learn and grow, trying to nudge kids away from their comfort zones and into a world that doesn't revolve around them. It would be great to get a glimpse at what they're doing and the grace with which they are doing it, because it seems that a lot of Americans have forgotten what they look like. If only Tony Danza would just step aside.

As Danza frets and worries about his teaching method, his fellow teachers keep trying to tell him to stop making the classes all about him. He doesn't need to constantly perform to keep the students' attention. By taking a step back and ceding some responsibility to his class, the lessons he's trying to teach will be more deeply understood. They are talking about the moments when you've given the students all the information and they begin to learn from each other, when they become teachers themselves, bringing the lessons into their own worlds. It is not a moment that saves anyone from prison, it is not a moment that inspires a classroom to break into song, it is not a moment that even guarantees graduation. But it's those moments that make people want to teach, or understand that what's great about teaching isn't the Big Finish. Sadly, for Danza, his class and the television audience, he can't get out of the way long enough to let that lesson sink in.