I will put my little boy in pink pants 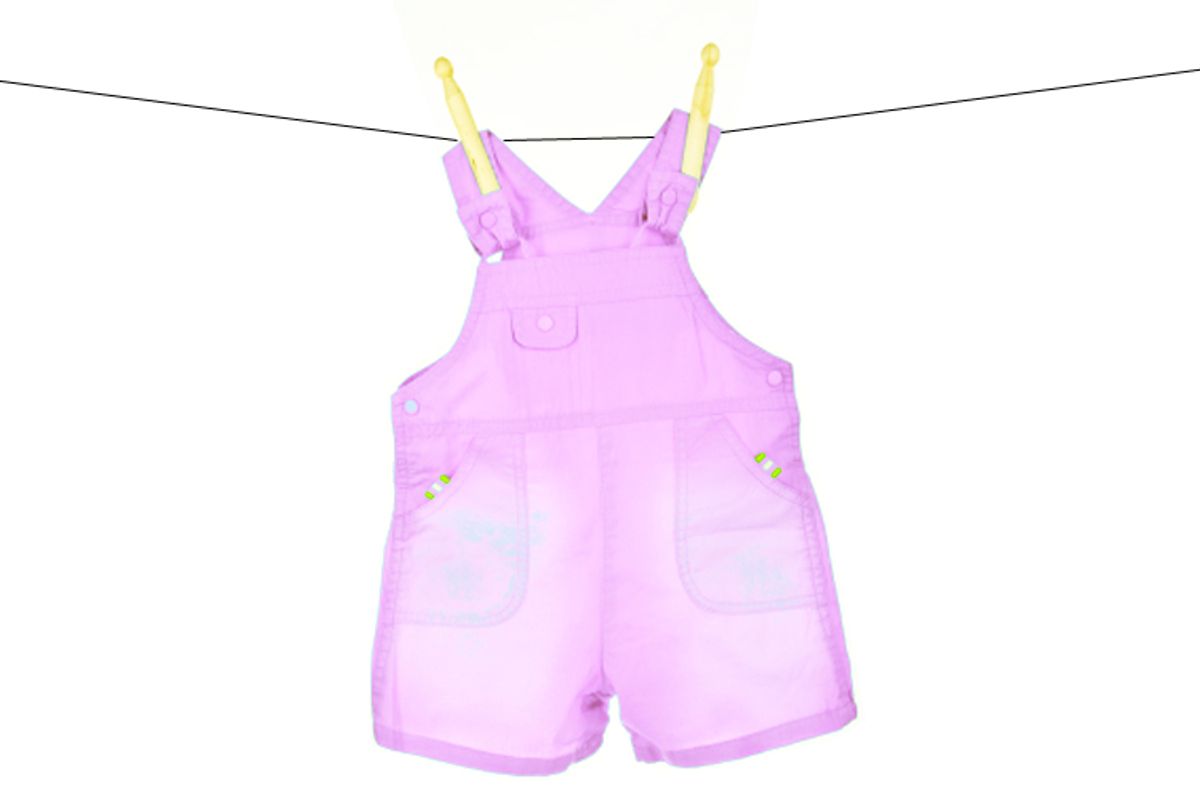 The pants mock me. I usually keep this pair hidden -- underneath my 18-month-old son's jeans and sweats, under the hand-me-down khakis with the embroidered hearts on the butt. But today the pants, those pink pants with the flowers, lie exposed in an empty dresser drawer. The only clean pants. For my boy.

When this happens -- and it happens more often than I like -- I think about a Gloria Steinem quote a friend posted on Facebook. It read: "We've begun to raise daughters more like sons ... but few have the courage to raise our sons more like our daughters."

Pink is the most loaded color, at least in a child's world. Once a fierce boy color, pink has for decades now been insidiously marketed and pushed as the epitome of a kind of frilly, marginalizing girlhood. Small-scale boycotts have popped up in England and elsewhere as people finally push back against what the former head of UK's National Consumer Council calls this "gender apartheid." And according to Slate, gender neutral clothes are making a high-end comeback, a possible way out of the pink prison.

And now there is some buzz about a book by Cordelia Fine called "Delusions of Gender," a volley in the nature-versus-nurture wars firmly on the nurture side. Fine argues that men are not from Mars and women are not from Venus. In fact, she says, we are way more alike than different. All those supposedly entrenched gender differences, the ones we read about in popular literature and scientific journals alike? Just a product of oppressive "neurosexism," she says.

This sounds like a great reason to get girls away from pink and all the socio-corporate limitations it imposes. But what about boys? What about the flip side of that gender apartheid, that boys are shunted into blue and trucks and trains? We do not perceive them as the victims -- likely because masculine traits are traditionally perceived as more active and positives -- but they are limited nonetheless.

For better or for worse, pink has come to stand for the feminine in the baby and toddler world. And let's not throw the baby out with the bath water, so to speak. The stereotypes run both ways -- feminine may be perceived as weak and passive, but it is also seen as gentle and sensitive. And if men are going to make it in post-industrial society -- and there is much fear that they will not -- they need these interpersonal and nurturing skills, both at work and at home.

Could we raise gentle and sensitive boys without the feminine symbols, without pink? Probably. But what's wrong with a little pink, with a flower here and a butterfly there? So, Ms. Steinem, I'm on board. I get it. I can't just toughen up my girl. I also need to make my boy confident with his softer sides. I need to embrace a metaphorical pink.

So during my recent nine months of paternity leave (thanks, Sweden, for helping me reverse gender stereotypes myself), I fostered my son's love of dolls, cuddling and kissing them when he reached them up to me with expectations in his eyes. And I regularly put him in the shiny pink dress at the local "open preschool" when he asked for it. And I still cuddle and kiss him until he can't take it -- no stoic, unreachable model of masculinity here.

The dude looks good in pink, too, not the least bit effeminate. (Wait, that is bad, right? I should say that he looks effeminate, and I love it. I have a ways to go on this one, it seems). For even if he is a pretty boy, he is not a "pretty boy," if you know what I mean (D'oh! There I go again, getting all macho about my sweet son.)

He wears plenty of pink, mostly in the details -- flowers on slippers, details on pants, collars on shirts -- all hand-me-downs from big sister. It would be financial insanity to just give all those clothes away. For while the Swedish state takes good care of families with small children, my paternity leave pay wasn't that good.

Back at the dresser drawer, however, before the pink pants, I falter. There must be other pants in the dirty laundry that would work. What is a little dried oatmeal on the leg?

At the park or at preschool when we pick up his older sister, if he has on pink, I see the looks, the glances. In the sandbox the smallest butterfly on his pants creates confusion.

You can see the gears working in the other parent's head. Is this a boy or girl? Should I ask? Maybe I shouldn't.

And this is in Sweden -- a country far more equal and less focused on gender than the United States. This is a place where men take more than 20 percent of the most generous parental leave in the world. This is a place where two 13-year-old boys took on Toys "R" Us for its sexist toy catalogs. There is no pink-blue tyranny here (babies are dressed in shockingly neutral colors, plus lots of stripes, which raises other fashion issues), and people usually know to ask, "What is your child's name?" instead of, "What is your son's name?"

But the code of pink thrives here anyway, and I am slowly buckling under the pressure. My son's pink shirts get worn as pajamas at home or only on cold days when I know his black San Francisco sweatshirt will never come off.

Standing at the dresser, I ponder that pink reflects my own masculinity -- all silly and sensitive at home but strong and silent in public.

And then I remember the bag of extra clothes in the extra diaper bag -- the one that I no longer use. I rush over. The pants inside are too short and a little frilly.

But they are orange.

Nathan Hegedus writes the Big News column for The Faster Times and also blogs at Dispatches from Daddyland. He recently returned to work in Stockholm, Sweden after nine months of paid paternity leave.