From obesity to diabetes, how startling discoveries about the womb are changing the way we think about health 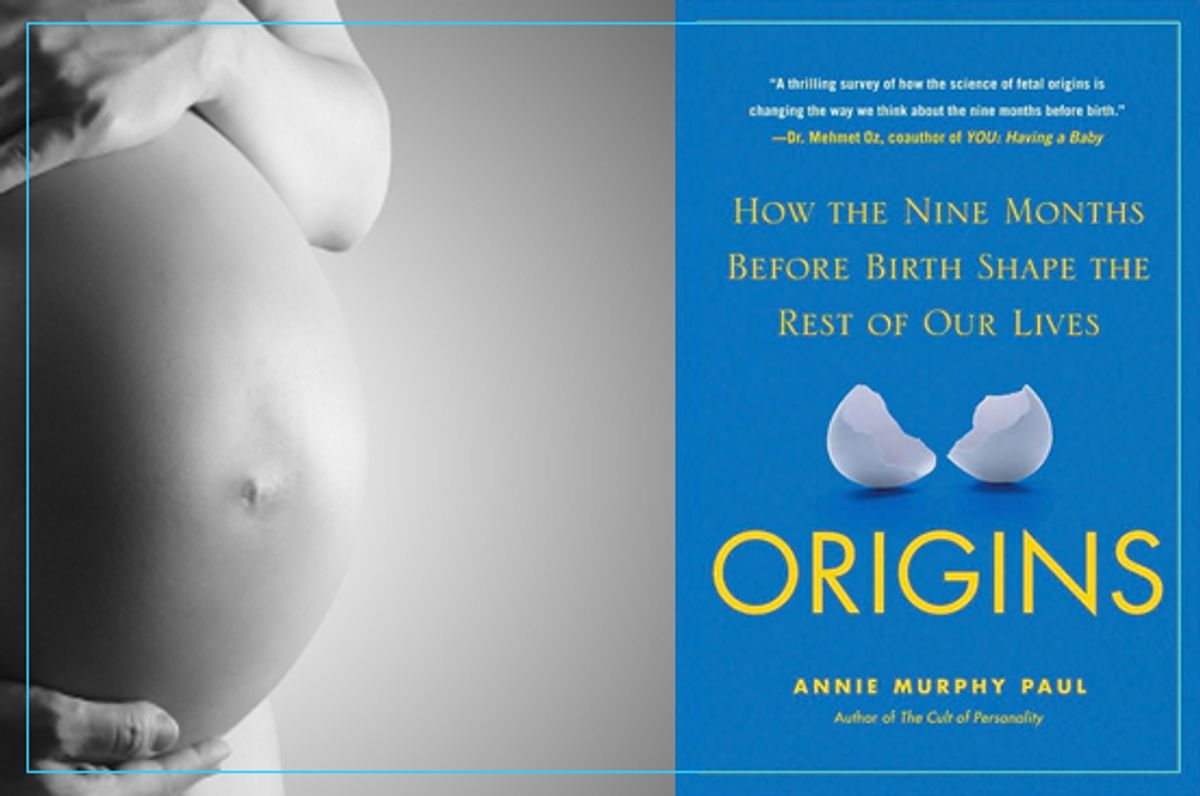 Type II diabetes, teenage obesity, chronic depression and heart disease: What do these ailments have in common? According to Annie Murphy Paul's explosive new book, "Origins: How the Nine Months Before Birth Shape the Rest of Our Lives," these conditions all originate, at least partially, in the womb.

We've all heard about thalidomide exposure and fetal alcohol syndrome, but in recent years, the burgeoning science of "fetal origins" has made some surprising discoveries about how conditions in the uterus can affect a grown person's health.

Veteran science writer Murphy Paul offers compelling examples. Pregnant women who were close to the Twin Towers on 9/11 and developed post traumatic stress disorder, for example, gave birth to babies with low levels of cortisol, a hormone that regulates stress. Women who are depressed while pregnant are likelier to deliver premature babies with low birth weights. These scientific discoveries reinforce the notion that, while a person’s genetic code offers a template for development, the conditions in the womb fine-tune the expression of those genes. It is the perfect welding of nature and nurture.

Salon spoke to Murphy Paul from her home in Connecticut about the science of the womb -- and the risk factors you probably didn't know about.

Why is this research into fetal development so important?

The field of "fetal origins" investigates the consequences that our nine months of gestation have for infancy, childhood, adulthood and even old age. We get our DNA at the moment of conception, but the way our genes behave, the way they’re expressed, can still be influenced by the environment, and now we’re learning that this kind of epigenetic modification, as it’s known, happens most consequentially in the uterus.

The idea that people are shaped by experiences in the womb has a long history. It’s not a new or necessarily a radical idea. In fact, it’s an idea that has been shared in most cultures and most places and most times. It’s really the mid-20th century medical and scientific establishment that was the anomaly in thinking that the fetus was sealed in its placenta; that it was developing programmatically without input from the environment. And it turned out to be wrong in many ways. There’s value and wisdom in the notion that woman and fetus are engaged in an intimate, reciprocal relationship, and we forget that at our own peril.

Based on your research, what can a pregnant woman do to increase her likelihood of having a healthy child?

Eat a lot of fish, but make sure it’s low in mercury. Eat chocolate, because that is associated with the reduced risk of preeclampsia [hypertension and related problems during pregnancy]. Exercise, because that gives your fetus a workout as well. Maintain a moderate level of stress in your life, because that actually accelerates fetal brain development. But the bigger message is that there are a lot of things wrong with the way we think about pregnancy. When there’s a new scientific finding, people either freak out or dismiss the finding as a scare tactic for women. Both of these reactions are unsatisfactory. The first makes pregnancy a miserable experience, and the second overlooks the nuances of research.

What illnesses are most closely affected by fetal development?

We can make the strongest case for diabetes and obesity. When a diabetic woman has uncontrolled high blood sugar, it has been shown to raise the risk that her child will have high blood sugar and obesity and, potentially, diabetes. The Pima Indians in Arizona have the highest incidence of type II diabetes in the world, and for years it was believed to be entirely genetic. But recent research suggests the prenatal environment provided by a diabetic woman has a big role to play in promoting diabetes in her offspring. So if we can control the blood sugar level of the pregnant woman for nine months, we can give her children a better shot at a healthy life.

And the obesity epidemic relates not only to eating too much or to a sedentary lifestyle, but also to the pregnant woman’s weight when she goes into pregnancy, and how much weight she gains while pregnant. I talk in the book, though, about the danger of fetal determinism, which is the idea that whatever happened in the womb sets the course for the rest of your life. Prenatal influences can predispose us in one direction or another, but they are by no means determinative.

You wrote this book while you were pregnant with your second son. How did your research impact your pregnancy?

I deal with things that worry me by learning more about them. Learning about this research and putting it in context is better than the constant drip, drip, drip of negative messages, or the sensationalist messages that you get from newspaper headlines. People have this idea that prenatal influence is something frivolous, like playing music on your belly, but they are actually visceral and consequential. The fetus is responding and adapting to cues that it gathers from the mother: what she eats, drinks, the air she breathes, the world she lives in, all impact the fetus before birth. It’s easy to imagine how this might put more guilt and responsibility on pregnant women, who are already burdened with a lot of worry.

I want to make clear that while there are decisions a pregnant woman can make that will benefit her future children, we shouldn't lay all the responsibility at her feet. So many of the conditions that affect a fetus, like air quality, water quality, food safety, natural disasters, or exposure to chemicals, are not things that any individual pregnant woman can rectify on her own. If we take this research seriously -- and I think we should -- we need to think about how, as a society, we’re going to create a sounder environment for developing fetuses. And I think an effort to do that would really pay off in terms of improved public health and well-being.

As you point out in the book, this research actually illuminates some of the health problems in the rapidly urbanizing developing world.

We think of obesity and heart disease in developing countries as being the result of a McDonald’s diet -- which happens when individuals move from small villages to large cities and suddenly have access to a Western diet. But the reality is a lot more complicated. If a pregnant woman lives in a rural environment, and her children then move to an urban environment, she becomes an unreliable narrator. The gestational period had primed the child for a different world than the one he or she ends up living in, and this mismatch causes a lot of the health problems that we’re seeing today.

A lot of women feel a tremendous amount of pressure to carry on during their pregnancy like nothing has changed -- to go to work for the same number of hours, and maintain all of their pre-pregnancy responsibilities. What’s the downside of being a "pregnant superwoman," as you call it?

These pressures come from the social convention that you can show how well you’re handling pregnancy by not slowing down even a little bit. In the Victorian era, women were not supposed to exert themselves. They were told to rest, and even confine themselves to the home. Now we have conventions that in their own way are just as oppressive as the Victorian conventions.

We don’t allow for any accommodation to the changes -- emotional and physical -- that women experience during pregnancy. We need to rethink how we treat pregnant women, and pregnant women themselves need to take a look at whether current practices are serving them well. I want the emphasis always to be on offering help to pregnant women, but not coercing or forcing or requiring pregnant women to do anything. There’s been a tendency to think that because a woman is pregnant, she loses some rights as a citizen or as a thinking person who is an agent in her own life, and obviously that’s not at all the case.

Any talk about fetuses brings up the abortion issue. How do you think these new discoveries are going to impact the debate?