As the firm sinks, Roger gives in to despair, Don gropes for a life raft and Peggy swims for shore 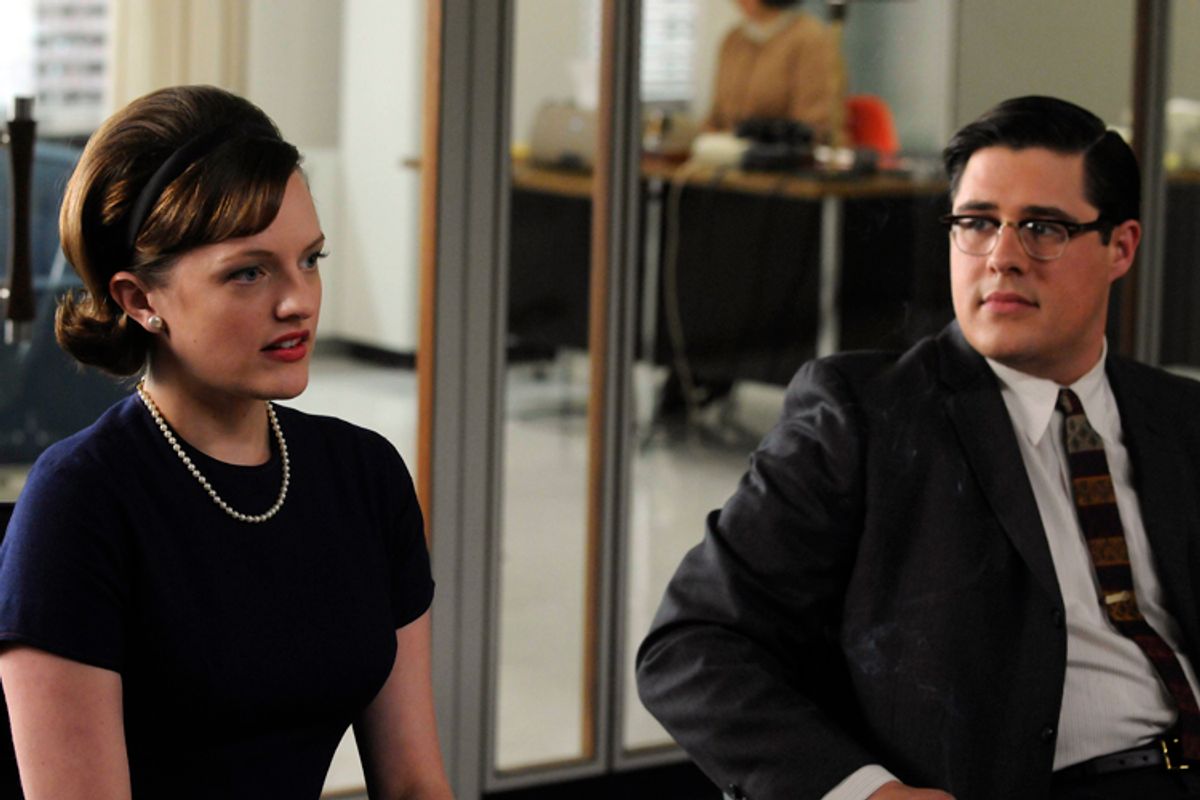 "Every day I tried not to think about what would happen if this happened." This is the sound of Don Draper of "Mad Men" losing faith in his firm, his life and the universe, and not surprisingly, instead of grappling with a direct emotion, he's been "trying not to think about it." But now the apocalypse may be here for Don and for SCDP: Roger has also been in denial and has failed to lure Lucky Strike back into the fold, and clients are threatening to abandon the firm before it sinks.

"Nothing should change. Nothing will change," Don tells his employees, trying to sound valiant. "We're going to push ourselves shoulder to shoulder and we're going to succeed tenfold, and it will be exhilarating." No one looks exhilarated. Don retreats to his office to put the fear of God into his creative team. But no one looks fearful, except for the new guy, who appears to be the new comic foil/Ms. Blankenship (as if she could be replaced!). We've never seen Don at such an ineffectual moment (when sober). He doesn't have a good answer for this crisis, and you can almost see him second-guessing himself. Faye tries to soothe him by saying, "You're the most hirable man on Madison Avenue!" but he shuts her down. "I'm not at that point yet." Uh-oh, her face says. What were we just talking about?

Later, when Don expects Faye to betray her other clients to give him tips on who might be willing to come to SCDP, she denies him. "I know the difference between what we have and the stupid office." But Don doesn't know the difference and doesn't consider the office stupid, which is why, when Megan the secretary reassures him, he soaks in her praise instead of shrugging it off.

Megan: You judge people on their work. I'm the same way. Everything else is sentimental.

Don: You want one?

Megan: How many is that? I know you're angry, but I hope you're not afraid, because you will get through this.

Don: You don't know that.

Megan: Why do you care what I think?

We're wondering the same thing. But it's a great moment: Megan has been floating around in the background for months now, never quite in focus, and now here she is in close-up, becoming a person before our (and Don's) eyes. She's adoring, she's smart, she's obviously in love with Don but knows exactly how to pretend she'll never become an inconvenience to him, and she has a gigantic mouth. Is Megan conjuring Monica Lewinsky?

It's the perfect time for Don to fall for the perfect pitch. Megan is only there because, in her words, "I didn't know if I should leave or not." (Unlike Faye.) Megan conjures Don the Cipher back to him, and it's irresistible. "I know everything about you, and you don't know anything about me," she coos, reminding him that a relationship of unequals could be his with little or no money down. No more pesky honesty! (Think of how Don squirms when he tells Faye the truth about why he didn't call, time after time.) No more emasculating emotional confessions! (Think of Don in the fetal position, telling Faye he's tired of running.) Don has been overachieving with Faye, but it's a strain. He's not really evolved enough to tolerate a woman who's every bit as self-possessed as him, plus a lot more self-aware. He doesn't really want a woman with high expectations. What feels the most comfortable, and soothing, to him, is the equivalent of Roger's Jane Siegel, a girl who says all the right things at the right time, a girl who really knows how to play make-believe right along with him.

And there's no need to look so stricken at the funeral of a man who hardly spent time with his wife and daughter. Work is what really matters, Megan echoes in Don's ear. Everything else is sentimental.

Clearly, though, what's easiest and most comfortable isn't always what's best for us. Don began the season as the man of the hour, winning a Clio, but he hardly felt proud of any of it. Instead, he drank himself into a stupor, and wondered who he really was. Now, just as he's starting to find himself, just as he's getting strong enough to consider coming out of the closet as Dick Whitman, just as he's found someone who accepts him for exactly who he is, he's shutting the door on all of that potential. He wants the easier path, where he can tell pretty lies to someone who'll nod along in agreement.

Just in case we don't remember where the path of easy ego rewards leads, here's Roger hitting rock bottom. "Lee Garner Jr. never took you seriously because you never took yourself seriously," an unusually harsh Burt Cooper tells Roger, summing up his fatal flaw. Roger has never had much success in taking anything seriously, from his job to his marriage to Jane. When he claims that he's in love with Joan but still doesn't take her pregnancy that seriously, musing about how she could have "it" but "it wouldn't be my child, let's make that clear," that's when we know that this is a man who's utterly lost. Nothing he says has any weight, he's just bobbing along with the tides.

This is a pretty dramatic shift, pulling us into Roger and Joan's potential romance, only to end things with Roger begging Joan to save him from the ruins of his life. It's fitting that when Roger shows up at Joan's apartment, she's scrub-faced and sensible, a far cry from the kittenish woman who gushed over his gift of a fur in that hotel room years ago. Even though she doesn't have a friend in the world and her jerk husband is half a world away, Joan can't reduce herself to being Roger's safety net when he's desperate. "I'm not a solution to your problems," she tells him. "I'm another problem."

When Roger gets home, there's Jane, wearing a terrible rich housewife outfit, cooing about his bad autobiography, "Sterling's Gold." "I'm so proud of you," she tells him, but we can see how much he feels these words, from a woman who's as in the dark and detached from reality as he is.

Finally, we come to Peggy, and what's her big apocalypse? Falling in love, an act that could throw all of her career gains out the window, particularly considering Abe's problem respecting her job and her boundaries. But for now, Peggy's on fire. After the big announcement about Lucky Strike, she tells Don, "I'm not worried," and then nails her presentation to Playtex. While Don is telling Faye, "I'm drowning, here," Peggy is told by Abe that she has the shoulders of an Olympic swimmer.

But as calm as she seems when everyone else is panicking, something tells us that Peggy will be swimming for her life, soon enough. "Every time something good happens something bad happens. I knew I'd pay for it," she tells Don, echoing her guilty Catholic core.

"You're not paying for anything, but I'm counting on you," Don replies, reflecting his own credo. In his world, there is no guiding principle, no balance, and no one has to pay. When he falters, someone is always there to save him and fix everything, whether it's the real Don Draper in Korea, or Anna Draper, or Faye, or Peggy, or Megan. After a season of finding himself, Don Draper is no longer merely a cipher. But we've discovered that underneath the bluster, Don is a weak man who clings to his ego at the cost of everything else -- and that's why he requires saving, over and over again.

"Close that, will you?" Don instructs Peggy as she leaves. Don is going back into his cave, and all of the promise of the past few months dries up in a heartbeat.