"The A-List": The triumph of vacuous gay culture 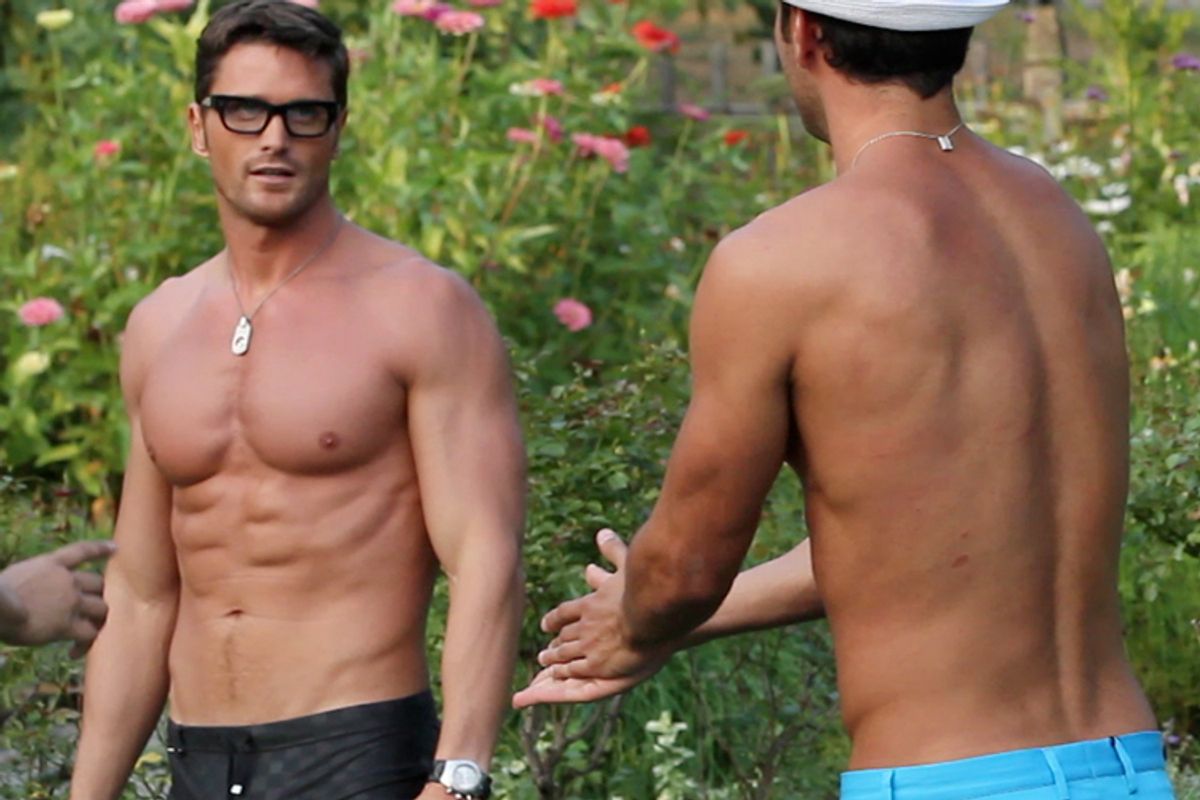 Last night, Logo premiered "The A-List," its new reality showsploitation series about a group of pretty, materialistic gay guys living in New York City. The series (from the production company that gave us "The Real Housewives of Atlanta") gets you hooked on your own constant indignation while you watch guys with warped egos and sculpted eyebrows aspire to "have it all." It’s the kind of riveting, disturbing television you consume while lying on the couch in your droopy sweat pants after a really long B-Minus-List day. But "The A-List" is also a surprisingly thought-provoking reminder of how much representations of gay men on TV have changed and how gay identity is turning into a kind of consumer bracket rather than an act of self-expression.

"The A-List" has the potential to be as addictive as "Jersey Shore," mostly because the characters have shocking amounts of self-confidence and not a moment of doubt that being on a reality show was a good life choice.

Existing in a superficial lacquer of gay urban life, the A-Listers are models, were models, are trying to be models, deal with models or cut the hair of models. They all embody slightly different versions of a manicured gay stereotype. Mike is a beefy musclebound celebrity photographer who claims he is one of the most sought-after professionals in the business. Derek is a model agent who loves to get spray tans and says that Lindsay Lohan stays with him when she comes to New York. Austin is a cute, sly Southerner who once dated Marc Jacobs for three minutes and is coming back to N.Y. to resurrect his modeling career. Ryan has a sugar daddy husband, owns a hair salon, and has a bitchy best friend. "I consider it A-List to have a personal designer on speed dial," he says by way of introduction. Most of them have no problem promoting themselves, and if they have an inner life, they have that important reality-show ability to suppress it while on camera.

The show’s centerpiece, however, is Reichen Lehmkuhl, who, you may recall, is the former Air Force pilot stud who, among his other talents, has both won the "Amazing Race" and dated Lance Bass. He has a jewelry line, he is starring in an off-Broadway play, and he has a new hot Brazilian boyfriend, Rodiney, whom he recently met while in Miami. Rodiney, who is new to the country, needs a job, and wants to -- guess what? -- be a model. The first episode reveals that cute, sly 22-year-old Austin once "dated" Reichen. (One thing the show gets right: that gay guys use the word "dated" to mean "hooked up.")

Rodiney is not happy about Austin coming around, especially when Austin just so happens to call while the couple are making out, naked, in a hot tub in the Hamptons. Reichen answers the phone and makes plans for dinner. "That was Austin. He wants to have dinner," he says while the hot tub jets ejaculate bubbles around them. Rodiney storms off in silence.

The drama might be gaggingly artificial, but the Reichen/Rodiney/Austin triangle actually works as a believable story line. Austin is young and crafty and seems like a total boyfriend stealer. And Reichen, who is so gorgeous even his encroaching crow's-feet are perfectly placed, seems like one of those guys who forgets he is beautiful and desired by everyone all the time. He seems doofy and means well, but be careful: He could crush your heart accidentally as if he were Lenny in "Of Mice and Men." It makes you worry for Rodiney, who often looks like he may actually be freaked out by the choice he made to have his soul shaped by television producers who want big ratings. Or maybe it’s just an act? Who can even tell anymore?

Like any good reality showsploitation series, the program elicits constant questions like this. Also: How did Reichen and Rodiney nab that huge Hamptons home with a hot tub? How did the producers manage to capture multiple camera angles on an impromptu fight? How is Austin affording a personal trainer and meals at Cipriani? Why does Ryan’s "salon" look suspiciously like a stage set? Are these people really that clueless or do they know what they are doing? (The answer to that last question seems self-fulfilling. Once this series gets its audience, I am sure all A-Listers will be able to parlay their attention into bigger success.)

I suppose in some way "The A-List" is groundbreaking. The series shows that no matter what sexuality you are, you have been infected by the media-soaked bizarro world of American life in the early millennium. Like the "Real Housewives," "The Bachelor" and any other show that features hot tubs, spray tanning and mansions with curved driveways, "The A-List" takes outdated markers of glitzy life in the '00s before the financial crash and repackages them as an aspirational consumerist lifestyle we can watch from our Ikea-decorated living rooms. This time it's gay men, living in fabulous, increasingly unreal gay ghetto bubbles.

If you're in New York and want to give yourself a little bit of cultural whiplash, check out the Act Up Oral History Project now up at the White Columns gallery in the West Village. At the exhibition, you can watch videos of interviews with surviving members of the important AIDS activist movement talking about that fiery time in the late '80s when gay men were furious and essentially at war, chaining themselves to the White House and lying in front of Pfizer trucks.

Just 20 years later, we have "The A-List." No wonder I don’t go out that much these days. Instead I sit at home in my droopy sweat pants and watch the A-Listers go out on TV. What a weird gay world it's turned out to be.