A genetic disorder left me with excessive body hair. After years of waxing and shaving, I'm ready to be normal 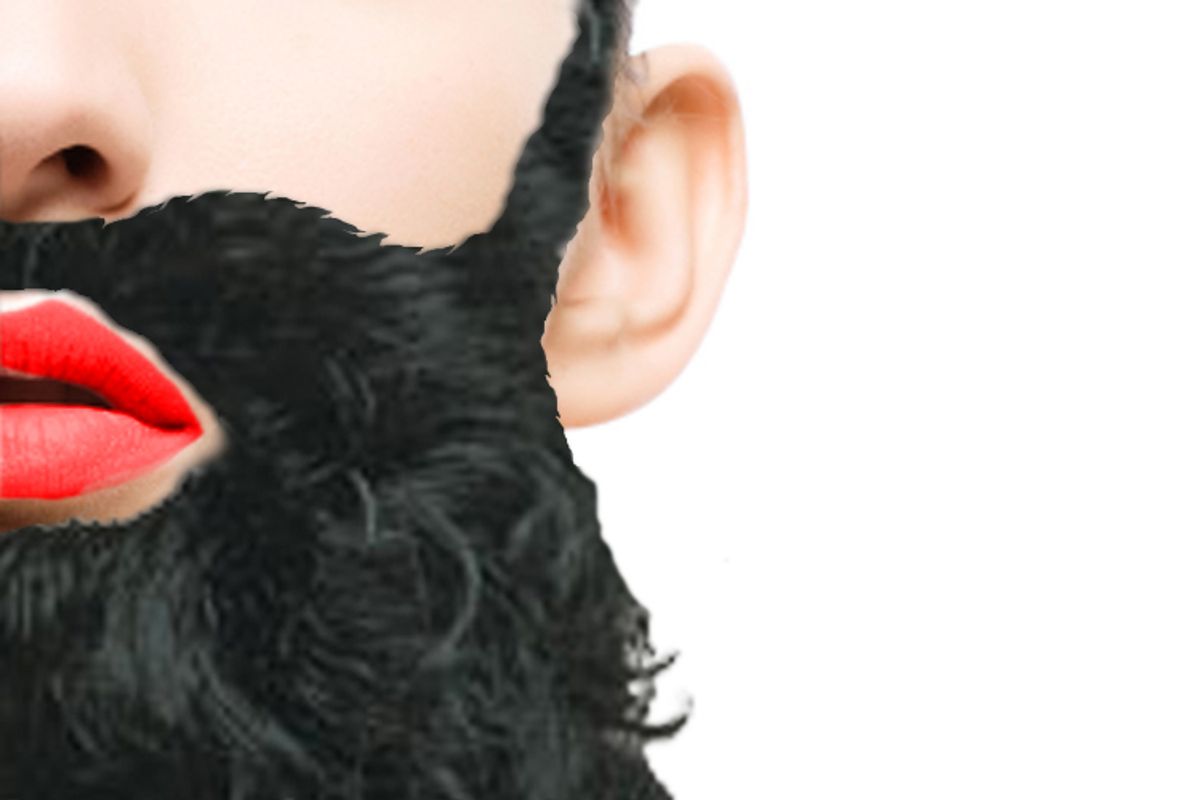 I'm making my way down the path that leads to the clinic's front door. I'm walking through a rock garden, past beds of flowers, little miniature waterfalls whose tinkling makes me want to pee. I feel like I'm walking down a hallway that keeps getting longer and longer. I've seen horror films like this: Just when you think you've reached the end, you find the end is out of reach.

Right before I decide it's a sign to go home, I see it: the front door. Damn. Two fewer steps in the fog and I could've given up, left, called from the office, sorry, couldn't find it, will call back to reschedule.

Or I could've just never rescheduled. I could've avoided the voice on the phone, that sweet down-to-earth tone that belongs to –

She's not what I'd expected: a pudgy Latina with braces, heavy eyebrows, a little roll of fat bulging beneath her shirt, which says Oil of Olay, spelled out in little faux rhinestones. The front lobby is comfortable. That sucks. I'd wanted it to feel sterile to the point of hostility. Leather couches and subtly lit mirrors, a smoke machine maybe. Instead it looks like the kind of place where you'd want to housesit. Warm, soft tones, an olive-colored rug on the floor, a glass-topped coffee table with copies of Rolling Stone and Harper's. A large, cushy-looking couch striped in olive and beige, tons of pillows, facing off against a flat-screen television set.

"Is this where you do the face stapling?" I ask Jessica.

I am a woman with a beard. I have an adrenal disorder -- congenital adrenal hyperplasia, it's a mouthful -- that results in excess hair as well as obesity, infertility and male-pattern balding. It's a gift of inheritance, and it was first called out to me when I was 10 years old.

I was sitting on the linoleum floor of the Black Mountain Middle School assembly room. A voice behind me said: "A werewolf!"

A second voice: "Where? Lemme see."

A werewolf? That was way more interesting than the German rock band that was about to perform for us. The show was meant as a history lesson in this time before the Berlin Wall tumbled, an idea that appealed more to school administrators than to us. I wanted to see the werewolf too.

Laughter gathered, bloomed and spread. I started to join in -- and then I felt that flush. Dummy, it said, don't you know?

I wore a Wonder Woman T-shirt. It had pulled up and out of my jeans, exposing my lower back. That was where they were looking. That was why they laughed.

The hair had come. It began with a place I'd never looked, a spot now revealed. How had I never noticed? How could I not know?

Jessica leads me into a private room. Now this is what I'd expected: white-on-white, not even a Thomas Kinkade knockoff to lighten things up. Excellent.

"Have a seat," she says, and I perch on the exam table. The air in here smells like nothing, nothing at all. It's as if they deep-clean the oxygen between appointments.

"I didn't like Oakland," Jessica says, a little while later. She's kneeling before me, peering closely at my cheeks and chin. "Too ghetto. So I moved to Hayward."

"The training ground for gangs," I say.

"Yeah." She puts her hand to the side of my face and turns me slightly to the left. I flinch. I'm not used to anyone touching me there. "But the parking's easy."

She pulls out a drawer, a clipboard, a piece of paper and a red pen. She uncaps the pen and I notice the short, unpainted nails capping stubby fingers. There's something endearing about her hands, something natural and undiminished. She marks a diagram, drawing with red ink on the blank, expressionless example. She's a lefty.

I bite my lip hard enough to draw blood – not from nerves, but to reassure myself that I'm here, I'm alive, I'm doing this.

Jessica puts down the clipboard and fixes me with a metallic smile. They make invisible braces, why didn't she go that route? Then I flush, angry at myself. You're judging her?

She says: "Let me tell you how it works."

The technician uses a hand-held laser instrument. It sends a light beam through the skin. The beam seeks melanin, a pigment found in hair and particularly in dark, coarse hair like mine. It hits and destroys the hair follicle. Cooling gel protects the skin. Topical cream and aspirin minimize pain.

That's Jessica too. She tells me how her hairy arms made her feel like something in an African jungle. "No more," she says, rolling up her sleeves. Now there's just smooth, freckled skin.

Her eyes are warm. Trust me, they say. "I'm very happy," she says. "So are my clients." Clients, not patients. Word choice means everything. Client means choice. It means you're the boss.

Jessica hands me a Popsicle stick with cooling gel. I swipe it across every problem area and in the end only my eyes remain uncovered. My pupils are dilated with worry, my left eyelid twitching.

"Hop up," she says, patting the exam table. I do this with a motion that is nothing like hopping. It is more like the walk to the guillotine.

"Lie back," she says, and I lower my head until it is level with my feet.

But it is not quick. It takes an hour and that is made bearable only by a break halfway through. My hands dig into the crinkly white paper beneath me. I feel one of my fingernails pierce the surface and it's almost like permission to scream. I moan instead.

"How you doing?" Jessica asks.

It feels like someone scraped my face with the blunt, rusty side of an ax, then sprayed it with lemon juice.

I'd trawled the Internet to find out just how much this was going to hurt. Like a rubber band snapping said one message board. Another warned of a little stinging, a little swelling. One laser clinic's website advised that patients might feel a slight prickling or burning sensation.

Let me post on those message boards. I'll give a rebuttal to that clinic. It feels like someone's going fishing in my face.

The laser is like a roving fishhook. Each time it bites into my skin I hear a beepbeepbeep. That's the beam seeking the follicle. Once found, it goes zap. That's the hair frying. Not only can I feel it, I can also smell it.

Outside this clinic lovers are having late-morning breakfasts. Bikers and joggers huff past. Tennis partners square off. Drivers pump gas at the Chevron. Mothers squat in front of strollers and shake fingers.

I would kill to be any one of them.

I bite my lip, curl my toes, remind myself why I'm doing this. No more razors in the morning, pulling my skin this way and that to get the closest cut. No more second shave of the day, the hair so thick and persistent it grows back even as it's shorn.

No more stubble, no more shadow.

No more hopeful posing in front of the mirror: From this angle I can't see it at all!

No more walking in a room and wondering: Are they looking at me?

I pull off the goggles. Light, beautiful blessed light. I struggle to sit up. My tailbone is tentative, unsure if it's able to hold me. My head is runny, my brain muddled. My face is a balloon expanded with too much air.

"Hand me a mirror," I say to Jessica. All my politesse, my good-girl training has vaporized in the moment. I need to see what's been done to me.

"So hand me the damn thing."

She hands it over.

There I am, my eyes red and wet above my inflamed skin. The singed hairs are everywhere, some already falling out. I brush at them with triumph.

Allison Landa is a Berkeley, Calif.-based writer who has held residencies at the MacDowell Colony, Kimmel Harding Nelson Center for the Arts and the Julia and David White Artists' Colony. She received her MFA in creative writing from St. Mary's College of California, and this essay is excerpted from "Bearded Lady," a memoir in the works. Visit her at www.allisonlanda.com.

Allison Landa is a Berkeley, Calif.-based writer who has held residencies at the MacDowell Colony, Kimmel Harding Nelson Center for the Arts and the Julia and David White Artists' Colony. She received her MFA in creative writing from St. Mary's College of California, and this essay is excerpted from "Bearded Lady," a memoir in the works. Visit her at www.allisonlanda.com.