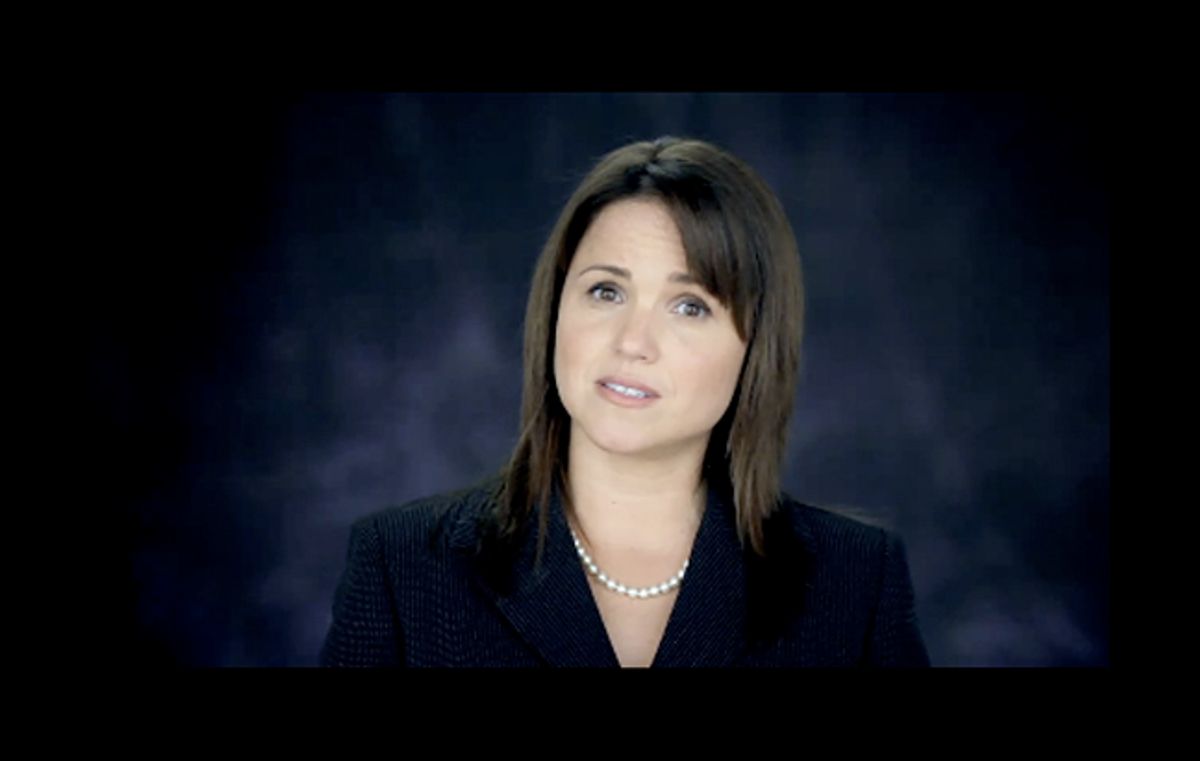 Those fingers in my hair

That strips my conscience bare

" by Cy Coleman and Caroline Leigh

Christine O’Donnell’s wiccan-denial is high populist eroticism. It’s imbricated with onion layers of Miltonian and Updikean sub-text. It’s subliminal and post-modern; it feels like it could be network promotion for a TV series about an innocent mom who, through an unusual series of events, is thrust into a sordid life of politics.

And it will go down in the annals of political advertising as one of the boldest, ballsiest examples of campaign theater in decades:

O’Donnell begins with three short but intensively crafted sentences that establish the narrative, and propel it forward:

The first sentence acknowledges the 800-pound broomstick in the room. She’s telling us not to the cozened by the alleged coven.

The third sentence is the emotional jujitsu; O’Donnell’s flips the switch, turns the camera around, and goes for a daring leap of mutual self-identification. Politicians always say that they are like us. They almost never say that they are us. It’s an epiphany of normalization that makes us believe her even if we don’t want to.

And although I know it’s strictly taboo

When you arouse the need in me

My heart says "Yes, indeed" in me

Proceed with what you’re leadin’ me to.

Having established the “I’m you” bond – a cosmic one-ness with her audience – O’Donnell then performs a fantastic rhetorical pivot. She says, simply:

"None of us are perfect."

This is a central, errr, stake of the commercial. It’s a direct acknowledgment of the flawed nature of humanity -- we are all sinners -- we are all living with the consequences of, as Milton put it, "Man’s First Disobedience, and the Fruit Of that Forbidden Tree, whose mortal taste Brought Death into the World, and all our woe."

I’m not being grandiose here. O’Donnell is sending out a Christian dog-whistle that calls upon a whole brain attic of memory and desire.

Then, having established the enduring power of Original Sin, she shifts to a statement of mutual dismay at the current state of affairs.

"None of us are perfect.

But none of us can be happy with what we see all around us."

There is no logical connection between these sentences other than the repetition of “None of us.” But it doesn’t matter. She’s already confessed her flaws on the personal level – forced us to admit our own sins, a mutual confessional – and can now take us by the hand and move to the political.

She then ticks off a brief litany of what’s wrong with Washington -- spending, trading favors, backroom deals.

This is packaged up with a delicacy that is unusual in political advertising, where production values are usually sacrificed in the interests of speed and immediacy. O’Donnell is lit beautifully; she is a latent but palpable object of desire. A lot of attention is paid to hair and make-up… Most candidates are shot under McDonald’s wattage. There are no Tea Party histrionics. O’Donnell is put forward with a non-threatening but unmistakable suburban sexuality; if she is a witch, she’s straight out of John Updike’s "The Witches of Eastwick."*

It’s such an ancient pitch

But one I wouldn’t switch

’cause there’s no nicer witch than you.

The spot wraps up with a final statement of twinning:

"I’ll go to Washington and do what you’d do.

I’m Christine O’Donnell and I approved this message."

You think the spot’s over. There’s a heartbeat of a pause. And then she closes with a final whisper of equality:

And those same two words appear on the screen. It’s damn beguiling.

And if all this witchcraft talk is leaving you jonesing for Frank singing the original song, here you go: