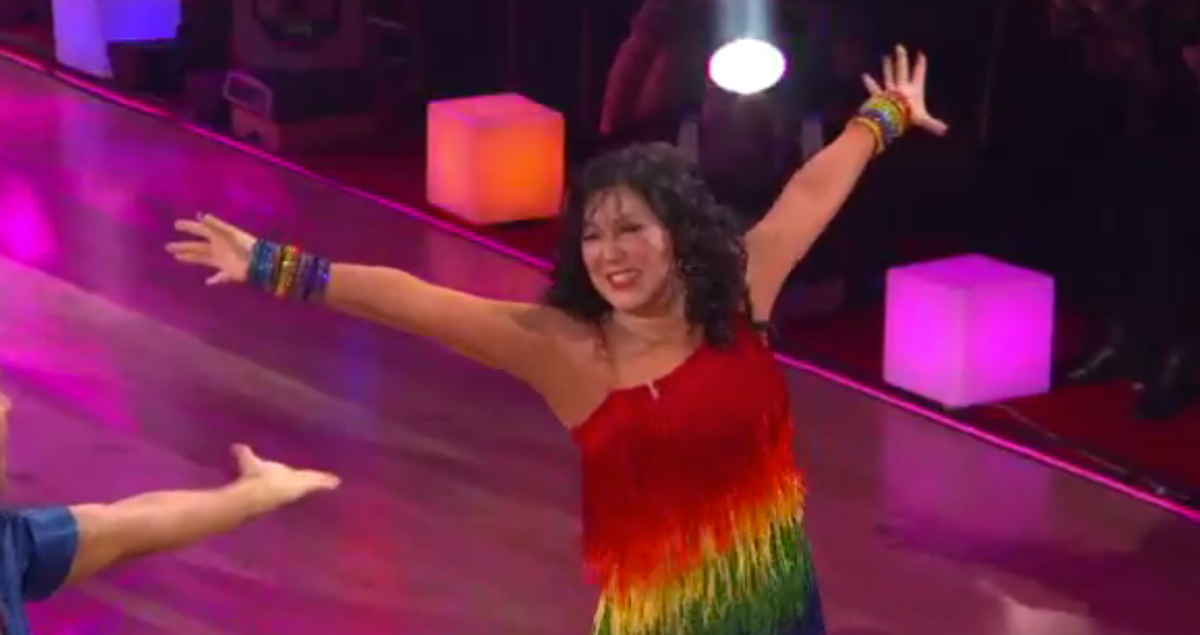 We said goodbye to Michael Bolton last week. The only person who seemed to be surprised about that was Michael himself, who called the wah-mbulance and went "Real Housewives of New Jersey" on Bruno for disrespecting him and his sad zombie doggy dance. "Bruno owes me an apology," he cried to every media outlet who interviewed him after the elimination, as partner Chelsie patted his arm gently and parsed her words of support carefully. "I think Bruno could have been more constructive," she said, as her eyes wandered up and to the left and her foot jiggled nervously, "he really worked very hard."

Yeah, I worked really hard on my karaoke rendition of "Making Love Out of Nothing at All" at the pirate-themed "Purple Parrot" lesbian bar in Rehoboth Beach this summer, but you don't see me sending a video audition to Royal Caribbean.

Michael was fatally out of his element -- like Meg Whitman at a working class neighborhood pancake breakfast -- and no amount of hard work was ever going to save him.

So, it's on with the show for Story Night!

Jennifer played the archetypal naughty teacher to Derek's love-struck student in a joyful samba which exposed the first cracks in their otherwise flawless run to victory. Unfortunately for them, the tangled la-turn-oh happened right in front of the judges' table, prompting a supportive but not overwhelmingly enthusiastic response. No matter, she's still the most natural dancer of the bunch and will stick around through to the finals.

Florence and Corky performed a "Sound of Music" inspired waltz, a dance certainly more suited to Florence's limited range of motion and emotional depth than last week's quickstep. In a strange choice, Corky cast her as the reluctant maiden to his romantic Lothario, creating some cringe-worthy moments where her "escape" from his charms played more like a Wayans movie spoof in a scene where a blushing 16-year-old turns around to reveal that she is -- well -- a 76-year-old Florence Henderson. Ack!

It didn't matter, though. As an audience, we had been pre-conditioned to respond sentimentally to her performance during the rehearsal segment where Florence choked up remembering the 20 years with her late husband as "the happiest time of her life."  The studio audience stood and grabbed the hankies as Corky dipped her seductively and laid a lingering smooch on her virgin lips for the final scene.

I, on the other hand, flushed my eyes with vinegar.

Kurt and Anna performed a fox trot to Daniel Powter's "Bad Day," surely a producer-inspired decision meant to play up Kurt's endless positivity. "Bad Day?" he said when presented with their choice of music, "we can certainly cheer that up a little, can't we?" Why, of COURSE he could! Anna's first directive was for Kurt to share an afternoon tea party (judging from his politics, I'm guessing this isn't the only tea party he's been to this year) with his young daughters in an effort to teach him to become more graceful by sipping from a small tea cup with pinky out and tiara on head. We get it, Kurt.

Kurt twirled around the dance floor like a totally not gay guy, spinning his umbrella like Gene Kelly and cheering up his "depressive Russian" partner with a twinkle in the eye and love for the righteous in his heart. Judges for the most part continued to be impressed with his charm and occasional grace, except for Bruno, who went all Michael Bolton on him and chided his leaden chimpanzee arms.

Margaret and Louis danced a samba to Barry Manilow's "Copacabana." Their dance was another "coming out" celebration, perhaps a calculated effort to lock up the over-40, Chardonnay-sipping, Pottery Barn gay vote. CHECK.

The performance was a rainbow-flagged, flamenco-inspired, hot tranny mess. Margaret always dances with such joy and abandon, but seems to abandon any semblance of technique right along with her inhibitions. At times she and Louis were so out of synch that I wasn't completely sure that she hadn't reverted back to a previous dance. Judges seem to like her personally, but universally panned her performance once again this week.

"This is a story of a soldier coming back from the dead to dance with you for the last time," Tony whispers gently to Audrina, trying to break through her inscrutable demeanor and challenge her to connect with a story of war and loss. For a second it looks as if she might tear up, but Tony knows her better. "Are you laughing?" he asks -- which of course she is. As a cast member on "The Hills" for the better part of her adult life, and a legendary fixture on the L.A. party scene, all genuine emotion seems to have been replaced by a carbon-copied approximations of feelings.

Audrina wanted us to get the chills from her performance, but I'm not sure that the chills I got from watching her were the kind that she had in mind. The judges universally praised her story-telling and emotional connection but I honestly could not distinguish any significant change in her facial expressions from one move to the next, unless "doe caught in headlights" could be described as an emotion. In her last act of pandering before scores were revealed, she threw a shout out to "all of the armed troops who have been lost in war" as if she has ever taken a moment to even think about them. Sorry, not buying it sister. Luckily for her the judges seem to be.

"Teen activist" Bristol and her partner Mark danced a fox trot, telling the story of a disinterested young woman who walks cavalierly by a homeless person only to pay attention to him once he strips off his rags to reveal a tuxedoed gentleman (I'm not sure it was Mark's intent that the story came off this way, but it did).

Bristol took a step back this week dancing a lackluster performance that, like Audrina's before her, lacked any real connection. Unfortunately for Bristol, Audrina's story had enough built-in emotion to mask the judges' ability to recognize that she didn't really get it, while Bristol's "ignore the homeless guy" story just seemed to confirm what we most fear about this generation -- that they have trouble connecting with anything real.

I've got to hand it to Brandy -- the pre-taped segment showing Maks slapping, bumping, intimidating and berating her made me want to throw his misogynistic, disrespectful self onto a slow boat back to the motherland and toss him into the gulag (I'd like to see how he'd respond to a larger, hairier, crankier Neanderthal slapping his butt around a little bit).  I can only hope the producers edited the segment in such a way as to send him a not so subtle warning. To her credit, Brandy didn't once complain. "I'm sensitive," she says after being thrown around like an accessory, "but I'm not weak. Let's GO."

They danced a "Bodyguard" themed samba, and although I couldn't see a tremendous improvement from last week, it's clear that the judges wanted to build her up after witnessing how Maks had spent the week breaking her down. It's no surprise that she's a star -- even though her movements were a little slow and too liquidy for the samba, she held a presence on stage for the entire performance.

There's no doubt after surviving hell week that she's also going to be getting the viewing audience support this week.

Kyle once again performed a cute, sweet, innocent (aka "Disney") waltz with his sexy, sultry, salty (aka "Playboy") partner Lacey and didn't seem to make much headway from last week. Judges agreed that he is the best performer on the show but Len is over it, calling his footwork "atrocious."  They're not going anywhere for a while, but Kyle's challenge continues to be technique -- and he needs to be careful that his goofball routine doesn't become cloying.

"You can't fist-bump if you don't know the beat, right?" says The Situation to the accusation that he doesn't have any musicality in his dance.  If you haven't been watching "Jersey Shore," these are the pearls that you're missing -- and the latest prophetic warning from a higher power that we are a dying civilization.

They danced a time machine-themed fox trot to the Black Eyed Peas "Boom Boom Pow," and unfortunately for The Situation there wasn't enough dry ice in the building to obscure the strange squat thrusts that he mistakenly tried to sell as dance steps. Carrie Ann and Bruno tried to provide some sort of encouragement by telling him that it was better than last week -- and strangely entertaining -- but it was faint praise indeed.

Rick Fox took a hit on the sexy meter with his unfortunate pre-taped booty shaking clips, but redeemed himself with a shirtless samba. As good looking as he is, his personality is more "geeky nice guy" than sex symbol which only adds to his appeal. Judges were universally positive, and he should be sticking around for a good long time.