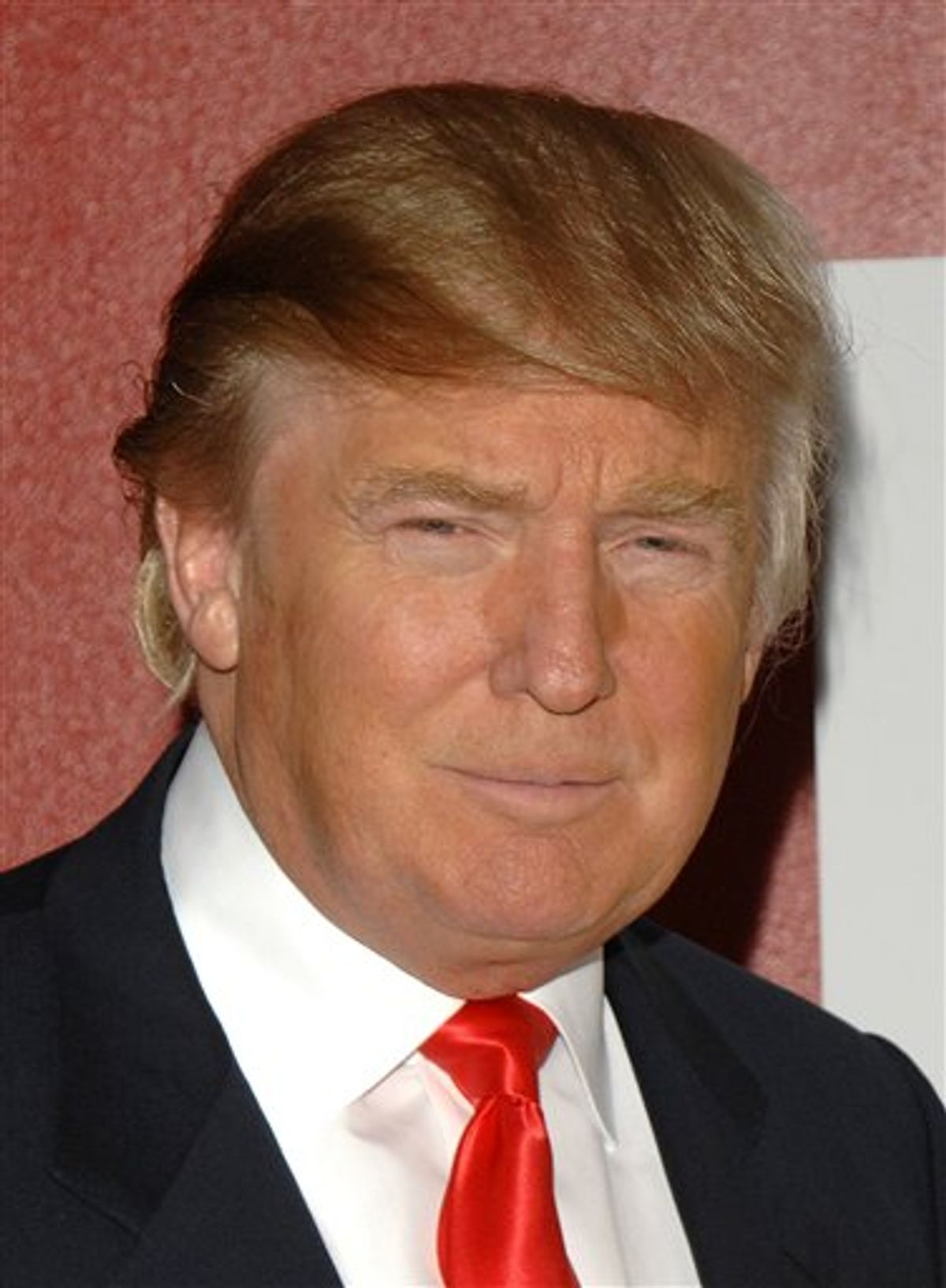 FILE - In this Aug. 19, 2009 file photo, Donald Trump attends a screening at The Museum of Modern Art in New York. Trump is offering to buy out one of the major investors in the real estate partnership that controls the site near ground zero where a Muslim group wants to build a 13-story Islamic center and mosque, according to a letter released by Trump's publicist Thursday, Sept. 9, 2010. (AP Photo/Peter Kramer, File) (AP)
--

We've been doing our best here at War Room to ignore the utterly hollow "Donald Trump might run for president!' story that Mark Halperin has been relentlessly promoting this week.

But "Morning Joe" took the bait earlier today, with Mika Brezinski pleading with Trump on the air today to "answer the question (of whether he'll run) on 'Morning Joe' at some point when you feel like it," and now Trump's response is making news:

"I can tell you this, Mika: For the first time in my life -- I've had so many people over the years ask me to do that, and for the first time in my life I am absolutely thinking about it. I don't know that I'll do it. It's probable that I won't do it but I can tell you, I'm thinking about it. Somebody has to do something, we are losing this country. This country will not be great if something isn't done rapidly."

Back in the summer and fall of 1999, he kept the ruse going for several months. At the time, Ross Perot's Reform Party was casting about for a new leader. Thanks to Perot's  1996 showing, the party would have ballot access across the country in 2000 and access to some federal campaign funds. Trump's name was touted by some in the party. So was Jesse Ventura's, and Pat Buchanan's. In July '99, here's what Trump said:

"My record of accomplishment in business and my outspoken views on trade, education and other issues have led many people to believe I would be a strong candidate and a strong president. While I have not decided to become a candidate at this time, if the Reform Party nominated me, I would probably run and probably win."

And when Ventura promoted the idea of a Trump campaign, Trump said this:

"Everybody wants me to run for president, and I have a lot of respect for Jesse and the job he has done. When he asks to look at something, I'm going to consider it."

Chris Matthews ended up hosting a live one-hour special with Trump at the University of Pennsylvania in November '99, during which Trump said that he was prepared to spend up to $100 million of his own money on a 2000 campaign.  "We're getting amazing poll results," Trump blustered. "A lot of people are looking for something different." He also touted a plan to impose a 14 percent tax on millionaires in order to pay down the national debt.

Of course, after milking the speculation for oodles of publicity, Trump ultimately announced that he wouldn't run. And now, 11 years later, he's up to his old tricks. But when he says that this is the first time he's ever thought about running -- well, either he's being disingenuous now, or he was being disingenuous 11 years ago.

To the show's credit, "Morning Joe" did run a brief clip from '99 before today's Trump interview, noting that he has toyed with a White House bid before. But no one followed up on Trump's claim that this is the first time he's thought about it, or asked why we should take him any more seriously now. (Also, for what it's worth: Trump ended the segment by giving a shout-out to Pat Buchanan, who was on the "Morning Joe" panel, for having "a lot of good answers." Back in '99, when Buchanan was angling for the Reform Party nomination he was flirting with, Trump dismissed him as "an anti-Semite.")

Anyway, Trump isn't running, ignore all the stories you see this week, and that's the last you'll hear about any of this here.