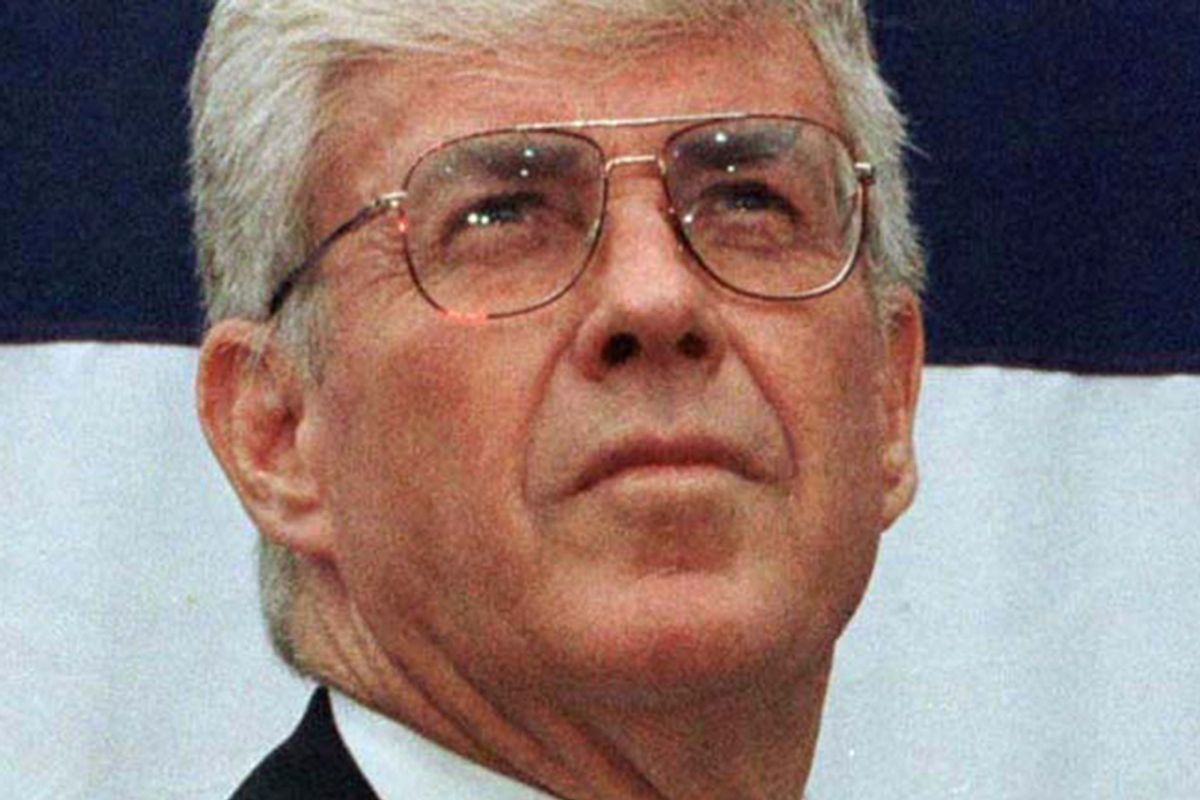 The FBI looked into rumors that Jack Kemp, then a long-serving Republican member of Congress, was gay as a potential source of concern during a 1989 background check. The agency finally concluded that the chatter  -- which haunted, and hindered, Kemp's attempts to advance in national politics for years -- was unsubstantiated.

Kemp, who died in May 2009, started his professional life as a quarterback in the National Football League and the old American Football League before throwing himself into politics. He won a Buffalo, N.Y.-area House seat in 1970, sought the 1988 GOP presidential nomination, and served as a Cabinet secretary under George H.W. Bush and as Bob Dole's running mate in 1996. His FBI file was obtained by Salon through the Freedom of Information Act.

When he was nominated in 1989 by Bush to be secretary of housing and urban development, the FBI conducted a standard background check, talking to a range of people who knew Kemp about his finances, his loyalty to the U.S., and any substance abuse problems. But the FBI files show the agents had another, more unusual area of interest: Was there anything to the rumors, dating from an episode in California in the 1960s, that the married Kemp was gay?

Business acquaintances and others interviewed by the FBI universally said they believed the rumors were false. Below is one of several examples. This is an FBI agent's account of a January 1989 interview with a woman who worked for Kemp beginning in 1977 (the FBI redacted her name):

The history given by the FBI source is not quite correct: The incident that sparked the Kemp gay rumor in fact occurred in the late 1960s. The columnists Jack Anderson and Drew Pearson broke the news in 1967 that what they called "a homosexual ring" had been "operating" in Ronald Reagan's California gubernatorial administration.* And while Reagan publicly denied it, he had in fact fired his chief of staff and another aide after an internal investigation concluded that they were gay.

Kemp, then in his early 30s and the quarterback for the Buffalo Bills, was at the time working on Reagan's Sacramento staff during the off-season. He had purchased a cabin in Lake Tahoe in partnership with Reagan's chief of staff; that's where some of the "homosexual parties" reportedly happened. Kemp later maintained that the cabin was merely a real estate investment and he never visited it. But the columnists had referred to an unnamed "athlete" who was a member of the "ring," a clear reference to Kemp. The rumor that would follow Kemp for the rest of his life had been born.

In a Republican Party that was hostile to gay people, the rumor became a major liability for Kemp (even as he built up a conventional GOP record of opposing gay rights). In the most stunning -- and under-reported -- example, a top aide to Reagan told the journalist Robert Novak that Reagan passed over Kemp for the vice-presidential nomination in 1980 because of "that homosexual thing." Kemp had been a leading contender for the job. It went instead to George H.W. Bush, setting Bush on a direct path to the party's '88 presidential nomination -- and the White House.

In early 1986, Kemp was preparing an '88 presidential run of his own when an interviewer on NBC's "Today" asked him to say "categorically" that he had never been involved in a "homosexual incident" (as one news story put it at the time). He issued the requested denial on "Today," and repeated it to several other reporters who profiled him in that period. Kemp's campaign never caught fire. He finished far off the pace in Iowa, a distant third in New Hampshire, and was a non-factor on Super Tuesday, then dropped out.

After Bush defeated Michael Dukakis that fall, he asked Kemp to serve as his HUD secretary, prompting the FBI to conduct its background check. Agents clearly found the gay question of sufficient interest (or concern) to ask around about it. It even came up in an agent's interview with Kemp himself.

The FBI also interviewed an editor at the San Diego Union newspaper who said his paper had investigated the gay rumors and found no evidence to support them. Ultimately, in a letter to the office of President-elect Bush, an FBI official summarizing the background check said the gay "allegations were unsubstantiated."

But the rumors would continue. In 1996, Newsweek reported that in the hours before Bob Dole's selection of Kemp as his running mate, Elizabeth Dole voiced concerns about the gay rumors (along with reports of a separate, unspecified "personal indiscretion"). After he was picked for the V.P. spot, the rumors had become an inextricable part of Kemp's biography, regularly mentioned in profiles. One comedian at a gay rights rally during the Republican convention in 1996 taunted: "Jack Kemp proves that Republicans believe that gay men can marry -- as long as they marry a woman."

* There is a useful account of the 1967 column and its ramifications in "Poisoning the Press" by Mark Feldstein.