What grad school taught me: The wonders of Lebanese-Mexican hummus

In tribute to my cohort, a traditional Lebanese dip topped with spicy beef, with untraditional Mexican flavors 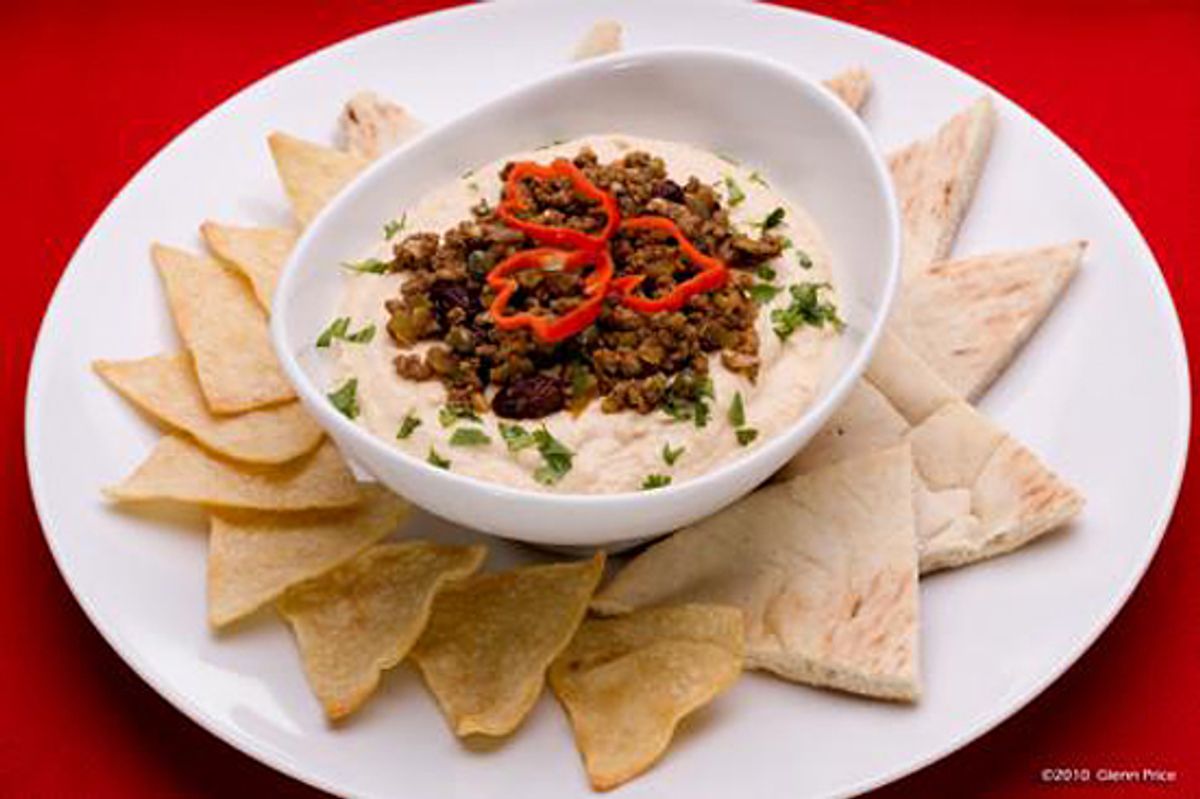 I dreaded every day of graduate school. I felt awkward and insecure around my brilliant and worldly classmates, and was terrified of my even more brilliant (and all incredibly famous) professors.

I shouldn't have been. And now, after a decade of teaching in other programs, I realize my years in the doctoral program in linguistics at UCLA should have been the best in my life (okay, maybe second-best after my two years of living on wine, cheese, and pain au chocolat while teaching English in Paris). UCLA's linguistics department, to put it in polite academic terms, kicked major ass – but I was too dim to realize it at the time.

Some of the things I dreaded about it back then were the very things that made it such a great place to learn. One of these was the Copy Room Ambush. The Copy Room Ambush worked like this: I'd be minding my own business, photocopying a journal article, when some Famous Faculty Member would suddenly pounce from behind the recycling bins:

FFM: You! You have to give a talk in the Syntax/Semantics Seminar!

ME: But what am I going to talk about?? I don't have anything ready to present!

FFM: That's your problem. You're going to give a talk!

It wasn't just me, either. Everyone's work got ripped to shreds. The department had a golden reputation and sufficient funding to invite prominent linguists from all over the world to come and present their latest work. We ripped that to shreds too, but not before taking the authors out to dinner.

And yet, all these famous linguists kept coming back when invited. And I kept on working on new papers that I knew would be soundly trashed.

Then, after presenting a paper, I'd rework it and rework it until the protests died down. What didn't kill my projects – and those of my classmates, professors, and our visitors – made them stronger. And we all knew it.

The department was an insanely busy place, with people presenting research (and getting trashed) just about every day, and a constant stream of interesting visitors from around the world coming through to teach, to collaborate, or just to share their ideas.

These visitors brought non-academic benefits, too. Visitors meant receptions and receptions meant free food – an important consideration for an impecunious grad student. Fridays were a big deal in the department, for that's when we had our weekly colloquium, usually presented by a visiting big shot. And after the colloquium was a lunch reception.

For me, these receptions were yet another vexing feature of life in the department. First, there was the sheer terror of standing around with a paper plate smeared with hummus or Boursin while trying to make small talk with people who scared the crap out of me. Second was the puzzling contents of those paper plates.

There was invariably something wonky about the food selection. A typical spread consisted of several kinds of cold salads, a fat wedge of Gorgonzola – and several bags of potato chips. Or the assortment would include hummus – served with slices of baguette. When wedges of pita did appear, so would several tubs of salsa or onion dip – but no hummus.

Student members of the Colloquium Committee were responsible for hunting down lunch, and most of my cohorts were scary smart – except, apparently, when it came to food. Perhaps this was because many of them were international students unfamiliar with how the foods they chose were meant to be eaten. Or maybe they were too absorbed in their research on optimality theory or quantifier scope to notice what they were serving us. I really didn't care why our lunches were so weird. All I knew was that it was driving me nuts.

One day, I finally had enough. We grad students were having a meeting to discuss ways to improve various things in the department, among these, the Friday reception. "You know what we need at the reception?" I said, "Matching carbohydrates. What's the deal with the salsa and bread, and tortilla chips and Brie?"

I saw a few light bulbs go off over my classmates' heads. "Oh God, we've totally been doing that," someone said.

"Yeah, the chips and butter have got to go," someone else chimed in.

I was too stressed out worrying about my dissertation to remember if we actually did anything about the matching carb situation. But in retrospect, that meeting should have been an "aha!" moment for me: my classmates didn't think I was an idiot. They actually thought my ideas (about food, at least) had merit and were worthy of serious consideration.

And having seen what the rest of the academic world looks like, I now find myself missing that place I spent years hating and dreading. I miss the caffeinated buzz of our seminar discussions. I miss the thrill of being among the first to hear of new research by bigwigs in the field. I miss my grubby little grad student office and the distant echo of the UCLA marching band practicing on fall afternoons.

And now that I think of it, hummus on tortilla chips wasn't half bad.

The connection between hummus and tortilla chips isn't as farfetched as it may seem. Lebanese immigrants have a long history in Mexico, especially in the states of Puebla and Yucatán. I ate at a Yucatecan restaurant in Los Angeles once and found kibbe (a Middle Eastern meatball made with ground lamb and bulgur) listed among the appetizers. A regional specialty of Puebla is tacos arabes -- tacos served on pita bread rather than tortillas. And the Mexican standard tacos al pastor -- tacos filled with spice-rubbed meat sliced off a vertical spit -- was, by some accounts, inspired by Middle Eastern shawarma.

Hummus ma lahma is a hearty Lebanese treatment of hummus that tops the already rich chickpea puree with spiced ground beef. Here's what I imagine a second- or third-generation Lebanese-Mexican in Yucatán might do with this dish: give the beef a local flavor with hot peppers, olives, raisins, and capers. The beef topping is inspired by the filling in a Yucatecan specialty, queso relleno (hollowed-out balls of Gouda filled with seasoned ground meat), and is inspired by Rick Bayless' pork-based queso relleno filling.

Put the room-temperature hummus in a serving bowl (preferably a wide, shallow one, but any kind will do). Top with some of the hot beef mixture (you'll have some left over; it makes a great filling for tacos, empanadas, or a ball of molten Gouda cheese). Garnish with sliced hot chiles and/or chopped cilantro. Serve with pita wedges and/or tortilla chips.